SHREWSBURY, Mo. (RNS) On a recent rainy Saturday, about 125 Catholics packed a basement conference room, many of them older, most of them lay people. Many were representing their parishes.

They gathered here to learn how to spread the faith, a concept that is both fundamental to Christianity and nearly foreign to modern Roman Catholics. 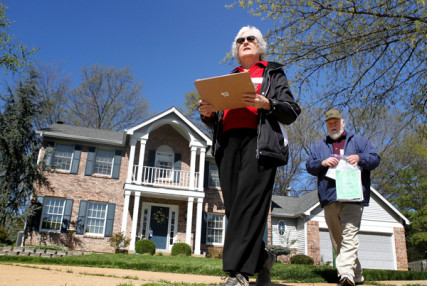 For the first hour of the conference, Kenneth Livengood, a parishioner at Holy Trinity Parish in St. Ann, Mo., detailed one way — door-to-door evangelization, a missionary strategy more familiar to Mormons or Jehovah’s Witnesses.

“We’ve been tricked into thinking faith is a private matter,” Livengood told the audience. “That’s a lie. Faith is meant to be public, and there are many ways to share it.”

He taught them how to form a door-to-door ministry, explained how to divide a boundary map of their parish into geographical sections, suggested useful handouts, gave safety tips, and showed videos that detailed the best way to respond to various reactions from those on the other side of the door.

“Divide up into teams of two,” Livengood said. “One of you can do the talking and the other should be a silent prayer warrior. At the next house, flip your roles.”

Evangelization is central to the Christian mission, but for the average adherent, the physical act of approaching a neighbor, work colleague or family member can be daunting.

A pamphlet produced by the Archdiocese of St. Louis called “Witnessing Christ Door-to-Door” offered a list of suggestions “since this may be a novel, perhaps, intimidating path.”

Going door to door “is not really a Catholic practice that we’ve done often in the past,” said the Rev. Stephen Bevans, professor of mission and culture at Catholic Theological Union in Chicago. “There have been so many of us we haven’t had to do it.”

In the final scene of the Gospel of Matthew, the resurrected Christ appears to his disciples and tells them — in what has come to be called the “Great Commission” — to make new disciples by “teaching them to observe all that I have commanded you.”

Catholics are no less engaged by the Great Commission than evangelicals, but over the last century, the church has relied on evangelizing through the example of its social justice work, relieving those in the pews from having to knock on a neighbor’s door.

Some newer denominations are more accustomed to evangelization. The Rev. Cecil Robeck, an Assemblies of God minister, sees a contrast.

“In some older churches, people are not used to talking about faith in personal terms,” said Robeck, a professor of church history at Fuller Theological Seminary.

“Over the last 25 years, the Catholic Church has said, ‘Our strong social agenda is all well and good, but we need to be vocal about our faith as well,’ ” said Robeck.

In the late 1980s, Bevans said, Pope John Paul II began referring to “the new evangelization” as a strategy of bringing lapsed Catholics in Europe back into the church.

In his book “Crossing the Threshold of Hope,” the pope wrote that evangelization “has never been absent” in the church. He quoted the Apostle Paul from the book of 1 Corinthians: “Woe to me if I do not preach the Gospel!”

Pope Benedict XVI made his predecessor’s “new evangelism” a central theme of his papacy, even convening a monthlong meeting of bishops from around the world last fall to discuss it.

During a speech to his fellow cardinals in Rome last year, New York Cardinal Timothy Dolan called evangelization “the sacred duty,” saying in the words of St. Augustine that it is “ever ancient, ever new.”

Many observers have cited Pope Francis’ humble behavior as its own kind of evangelization. Or, to use a phrase attributed to his namesake, St. Francis of Assisi: “Preach the gospel at all times. When necessary, use words.”

Bevans said images of Francis stopping to bless a disabled man during his papal inauguration, or washing the feet of women during Holy Week, were especially powerful.

“There you see the face of Jesus,” Bevans said. “That’s what evangelization is about.”

“Sometimes people get a little nervous talking about their faith, but spreading the message of Jesus Christ has always been the mission of the church,” she said. “We’re just trying to refocus.”