(RNS) Muslims in America are much less inclined to support suicide bombing than other Muslims abroad, and are more likely to believe that people of other faiths can attain eternal life in heaven, according to a new report released Tuesday (April 30) by the Pew Forum on Religion & Public Life. 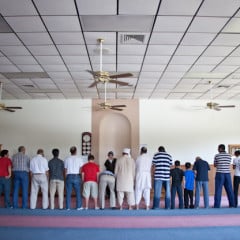 Men pray toward the direction of Kabah in Mecca during 1:30 prayer at the Islamic Society of Greater Kansas City on Tuesday afternoon, June 26, 2012. RNS photo by Sally Morrow

Of the countries surveyed, only a majority of Muslims in America — 56 percent — believe people of other faiths can go to heaven; by contrast, that figure among U.S. Christians is about 64 percent. U.S. Muslims are also less likely than Muslims abroad to believe in evolution, sharing views that are closer to those of U.S. Christians.

Globally, most Muslims also reject suicide bombing, although significant minorities in several countries say such acts are at least sometimes justified, including 26 percent of Muslims in Bangladesh, 29 percent in Egypt, and 39 percent in Afghanistan.

At least half of Muslims in most countries surveyed say they worry about religious extremists in their own country, including two-thirds or more of Muslims in Egypt, Tunisia, Iraq and Indonesia.

The percentage of Muslims who say they want Shariah, or Islamic law, to be “the official law of the land” varies widely around the world, from fewer than 8 percent in Azerbaijan to 99 percent in Afghanistan. “Solid majorities” in most predominantly Muslim countries surveyed, however, favor the establishment of Islamic law. (The report did not ask the same question of American Muslims.)

That view did not preclude religious tolerance, the survey found, as most Muslims also favor religious freedom for people of other faiths.

The reason for the variation? “Muslims have different understandings of what Shariah means in practice,” said James Bell, the Pew Research Center’s director of international survey research, adding that support for Shariah cut across age, gender, and economic groups.

In most countries surveyed, majorities of Muslim women and men agreed that a wife is always obliged to obey her husband, including more than 90 percent in Morocco, Tunisia, Afghanistan and Indonesia.

The 157-page report is based on more than 38,000 face-to-face interviews conducted in more than 80 languages with self-identifying Muslims in 39 countries and territories. The report combines findings from a 2011-2012 survey of 24 countries in Africa, Asia, and Europe and a 2008-2009 survey of 15 other countries in sub-Saharan Africa.