(RNS) Christian conservatives have grown increasingly alarmed in recent weeks over reports and rumors that the Pentagon is considering new policies aimed at discriminating against Christians and disciplining or even court-martialing those who share their faith. 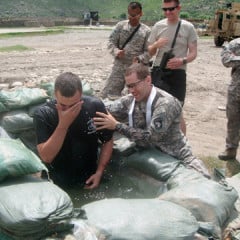 But the Department of Defense on Thursday (May 2) sought to debunk that speculation, saying that while aggressive proselytizing is barred, evangelization is still permitted and the rights of all believers – and non-believers – will be protected.

“The U.S. Department of Defense has never and will never single out a particular religious group for persecution or prosecution,” Pentagon spokesman Lt. Cmdr. Nate Christensen said in a statement. “The Department makes reasonable accommodations for all religions and celebrates the religious diversity of our service members.”

“Service members can share their faith (evangelize), but must not force unwanted, intrusive attempts to convert others of any faith or no faith to one’s beliefs (proselytization),” Christensen added.

He also said that “when religious harassment complaints are reported, commanders take action based on the gravity of the occurrence on a case by case basis.” He did not specify what the range of penalties could be.

The latest statement was aimed at refuting widely circulated reports in conservative media outlets that Christian soldiers could be court-martialed for sharing their faith. Rear Adm. William D. Lee of the U.S. Coast Guard warned of threats to faith within the military while speaking at National Day of Prayer observances on Capitol Hill. RNS photo by Adelle M. Banks

Whether the push back will be successful in dispelling suspicions, even within the ranks, is uncertain. Even as Christensen released his statement Thursday, Rear Adm. William D. Lee of the U.S. Coast Guard warned of threats to faith within the military while speaking at National Day of Prayer observances on Capitol Hill.

“I am not talking about proselytizing; I am vehemently against that,” the admiral said in remarks that drew a standing ovation. “I’m talking about gently whispering the gospel.”

The current controversy seems to have originated with Fox News contributor Todd Starnes, who on Tuesday wrote about a Pentagon meeting on harassment and tolerance issues; among the attendees was the head of the Military Religious Freedom Foundation, Mikey Weinstein. Mikey Weinstein, founder of the Military Religious Freedom Foundation, has had grafitti sprayed on his house, dead animals left on his lawn and shots fired through his window. Critics’ prayers against him, he said, are the least of his worries. Religion News Service file photo.

Weinstein is known for his inflammatory rhetoric about religious believers and Christians in particular, and he didn’t disappoint this time: he told The Washington Post after the April 23 meeting that proselytizing in the military is akin to “spiritual rape,” among other things.

The Fox News report on Weinstein’s remarks also cited a statement from Christensen, the Pentagon spokesman, who reiterated the preexisting policy against proselytizing. But the Starnes piece went on to claim that the policy also applied to evangelizing, or sharing the gospel. In addition, the story highlighted court martial as a possible penalty.

Outlets like Breitbart.com then amplified the reports with stories such as “Pentagon May Court Martial Soldiers Who Share Christian Faith.” The Washington-based Family Research Council then launched a petition drive – which had more than 100,000 signatures as of Thursday – to urge the Pentagon “to scrub plans to court-martial Christians.”

But this latest dust up did not occur in a vacuum.

In recent years the U.S. military has become a battleground in the culture wars as the growing pluralism of the armed forces, along with increasing assertiveness of both Christian and secular activists, have led the Pentagon to clarify and develop policies of neutrality.

Those policies often do not sit well with Christians, and the Obama administration’s 2011 decision to end the military’s “Don’t Ask/Don’t Tell” policy on gay service personnel ramped up their fears still further.

Then in early April it was reported that during a U.S. Army Reserve presentation, an outside contractor had included Catholics and evangelicals in a PowerPoint show listing possible “extremists.” While the Army removed the offending slide, the incident was reported as another example of anti-Christian bias in the military. 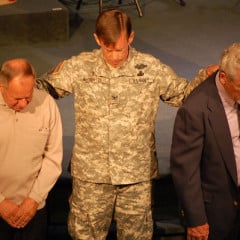 Scott McChrystal, a retired Army chaplain and the military/VA representative for the Assemblies of God, prays during a church service with other veterans. RNS photo courtesy Scott McChrystal

Just three weeks later, when some soldiers and chaplains complained that they were blocked from logging onto the website of the Southern Baptist Convention, Christian conservatives accused the military of targeting evangelicals for censorship.

Even after it turned out that the problem lay with a glitch in the SBC’s own website, the Family Research Council and others still insisted the incident revealed a troubling pattern of military antipathy to Christians – a charge that critics said was akin to crying wolf.

“Conservatives are supposed to stand for truth against relativism. But that seems not to be the play in this case,” wrote RealClearReligion columnist Jeffrey Weiss. “Truth that doesn’t fit a predetermined narrative is stood on its head and square-peg-crammed into a round hole.”

The Christian activist group Alliance Defending Freedom on Thursday claimed victory, saying the Pentagon had “backtracked” on its previous position, but said it was still going to pursue legal channels to investigate “this gross error.”