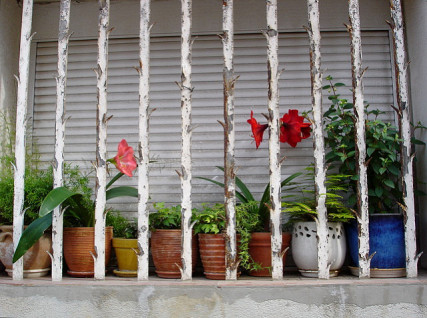 Three Cleveland girls, now women, lived as sex slaves in a house of horrors for more than a decade.

All sorts of “love thy neighbor” and “brother’s keeper” questions emerge. Some neighbors who had seen or heard of the evil in the Castro brothers’ house called police, and didn’t do more when the police didn’t find anything amiss.

Others say they are ashamed because they didn’t have a clue.

Cathy Lynn Grossman writes about how prayer – “ceaseless prayer” — helped the women’s parents survive all these years without their daughters.

Elizabeth Smart, another survivor of abduction, said recently that her conservative religious upbringing intensified her feelings of worthlessness after she was raped by her captor and weakened her will to attempt escape.

Still missing: the kidnapped Syriac Orthodox and Greek Orthodox Archbishops of Aleppo. The Orthodox communities are postponing Easter celebrations this week and gathering instead to pray for their release.

Delaware Tuesday became the 11th state to allow same-sex marriage after two state senators — one Democrat and one Republican — moved to the “yes” column. Next up, Minnesota.

VP Joe Biden asks faith leaders to pressure lawmakers on comprehensive background checks for gun buyers – which failed in the Senate last month but could revive.

And so we find ourselves at an impasse regarding Tsarnaev’s remains. A public that does not want them to remain, and a religious tradition that says they must remain, even if not in holy ground.

Billy Graham, 95, will tape a message as part of a home video evangelism program to be released this fall by the Billy Graham Evangelistic Association, which is billing it as his last crusade.

A Texas school superintendent says the high school runner broke the rule against over-celebrating athletic victories and his team can’t go to the state championships. The student’s father says he was just trying to praise God.

The Tony-nominated “Testament of Mary” ended its Broadway run after two weeks. David Gibson asks whether blasphemy had anything to do with it.

David Gibson also writes about the resignation of the  priest who led a leading treatment center for clergy suffering from emotional, sexual and addiction problems. The former head of the Saint Luke Institute is accused of misusing funds in his home diocese and engaging in an “inappropriate adult relationship.”

I saw the Dalai Lama yesterday. His English is shaky, his glasses couldn’t be more out of fashion, and he delivered his speech wearing a dorky University of Maryland visor. But to the 15,000 mostly young people who packed the arena, he’s one of the coolest people on the planet. Here’s what he had to say about non-believers, the moral education of children and finding inner peace.

One of the things I didn’t know about the Dalai Lama is that he he has an easy, infectious laugh, and that his humor is often directed at himself. Cathleen Falsani writes on the same theme: “God won’t mind if we laugh at ourselves.”

Israel detained, and then released the the mufti of Jerusalem, Mohammed Hussein — the top Muslim cleric in the Holy Land — after several hours of questioning over disturbances at the Temple Mount.

The ultra-Orthodox community in Israel is reeling today after the nation’s attorney general said that religion is no excuse for denying equal opportunities to women on buses, on the soccer field, and basically every other place in the public sphere.

A sad tweet from Dallas Willard announces the Christian thinker has stage 4 cancer.

This roundup is a free, weekday summary of religion news from around the nation and the world from Religion News Service, a non-profit. We aim to make it informative, entertaining and thought provoking. If you rely on or simply enjoy the roundup, please consider making a contribution to support it. Thanks.