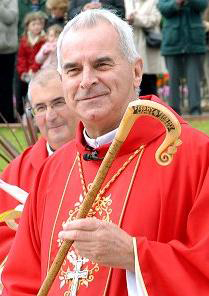 (RNS) The Vatican on Wednesday (May 15) said that Scottish Cardinal Keith O’Brien will do penance in an undisclosed location outside of his country following his resignation in February amid reports that he had made sexual advances to a number of priests.

The move is an abrupt change of plans for O’Brien, and apparently came under pressure from Pope Francis, who on Wednesday also delivered a sermon that blasted bishops and priests who “become wolves and not shepherds.”

While the pope’s homily focused on the temptations of money, “careerism” and “vanity,” the dual developments reflected Francis’ well-known disdain for clericalism, and prompted speculation that the new pope might take a harder line against misbehaving bishops.

O’Brien, a vocal opponent of gay rights, stepped down as archbishop of St. Andrews and Edinburgh when reports of his sexual advances and affairs emerged in late February; a week later he apologized and admitted that “there have been times that my sexual conduct has fallen below the standards expected of me as a priest, archbishop and cardinal.”

That was on the eve of the March conclave that elected Francis. O’Brien said he would not take part in the papal election because of the scandal, a first, and that he would “play no further part in the public life of the Catholic Church in Scotland.”

O’Brien had recently been seen moving into a seaside home outside of Edinburgh, and was quoted as saying: “My plan is to move here ultimately to relax and enjoy my retirement.” That may not have been the signal the new pope wanted to send.

In a terse press release on Wednesday, the Vatican said that O’Brien, “in agreement with the Holy Father,” would leave Scotland “for several months for the purpose of spiritual renewal, prayer and penance.” It concluded that “any decision regarding future arrangements for His Eminence shall be agreed with the Holy See.”

Earlier Wednesday, at his informal morning Mass in the Vatican guesthouse where he is living, Francis asked a group of Vatican employees to pray for their bishops and priests because churchmen often fall prey to temptations. The pope focused mainly on the temptations of money and vanity, both of which he has cited before in comments blasting vainglorious clerics who strut like “peacocks.”

“When a bishop, a priest goes on the road to vanity, he enters into the spirit of careerism,” Francis said Wednesday, “and this hurts the church very much – (and) ends up being ridiculous: he boasts, he is pleased to be seen, all powerful – and the people do not like that!”