WASHINGTON (RNS) The Obama administration isn’t afraid to call out Republicans for playing politics on Capitol Hill, or Wall Street for runaway profits or insurance companies for health care woes. 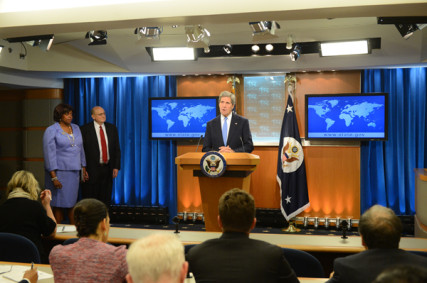 But why, when it comes to protecting religious freedom abroad, is the State Department so hesitant to name names?

Watchdogs say the State Department missed a key opportunity to put teeth into its annual assessment of global religious freedom, which was released by Secretary of State John Kerry Monday (May 20).

Continuing a pattern begun under President George W. Bush, the report does not include a new list of “countries of particular concern,” or “CPCs” — the diplomatic term for countries that either actively suppress religious freedom or don’t do enough to protect it.

The list varies little from year to year — North Korea, Iran, China and a handful of others are routinely cited as the worst offenders. But the new report contains no worst-of-the-worst list that would single out offenders for sanctions or other punishment.

The lack of new CPC designations in the report is a big flaw, according to Rep. Frank Wolf, R-Va., the dean of religious liberty watchdogs on Capitol Hill.

“As religious freedom conditions continue to deteriorate globally, it is more important than ever that the State Department use this vital tool to press governments to end abuses, protect their citizens and respect this fundamental human right,” said Wolf and two other congressmen who fired off a letter to Kerry on Monday.

Their concern was echoed by others who monitor religious liberty abroad, including the U.S. Commission on Religious Freedom, the independent body created by Congress that each year puts out its own list of worst violators.

For years the annual report and the CPC designations were simultaneous; that changed late in the Bush administration and has been continued under Obama, Thames said. But the list of CPCs “is what gave all of this teeth,” he said.

The list prompts “countries to do things they don’t normally want to do.”

But Aaron Jensen, a spokesman for the State Department’s Bureau of Democracy, Human Rights and Labor said the CPC designations can be made on a different schedule than the report’s release and “at any time as conditions warrant.”

He said he has no information as to when the State Department may release a new CPC list.

Thames said he’s hopeful that the new designations will come out this summer.

They work, he continued, offering Vietnam as an example of a country that bristled at its inclusion on the CPC list. But actual reforms, pressed by U.S. diplomats, resulted in a delisting in 2006.

USCIRF — which generally pushes the State Department to be more aggressive in insisting on religious freedom reforms in its diplomacy — in April recommended that all eight countries on the State Department’s current CPC list be redesignated: Myanmar, China, Eritrea, Iran, North Korea, Saudi Arabia, Sudan and Uzbekistan.

It’s true, said Paul Marshall, a senior fellow with the Washington-based Hudson Institute who specializes in religious freedom, that the State Department’s CPC  list has been “very stable for a long time.”

And there are certainly some entrenched, authoritarian governments, such as North Korea’s, that don’t care if they make the list or not. But that doesn’t mean the CPC list and the report in general are not valuable, Marshall said.

Take CPC-designated Saudi Arabia, he said, where non-Muslim religious practice is still officially forbidden. The U.S. has pressed Saudi officials on the topic, and in recent years, the Saudis have said that they are not going out of their way to root out non-Muslim observances, though they still prosecute them when they see them.

And in Myanmar, a long-standing member of the CPC club, the religious freedom situation has been fluid, and is something we want our government to keep track of, Marshall said. So “the list is a good thing.”

Jamsheed K. Choksy, a professor of Central Eurasian Studies at Indiana University and an incoming USCIRF fellow, said the problem is actually larger than the report or whether the CPCs are included.

“What needs to happen is that the government of the United States needs to take these reports and make them central aspects of American policy and foreign relations,” he said.

Retired Ambassador Randolph Bell, who runs the First Freedom Center, a Virginia-based religious freedom watchdog group, took a similar view. The lack or inclusion of new CPCs isn’t as crucial as whether U.S. foreign policy is going to act on the information gathered by its own staff, and make religious freedom an organizing principle for U.S. bilateral and multilateral relations.

But in any case, Bell said, the U.S. needs to keep churning these reports out to keep attention focused on the cause of the repressed faithful.

“If they’re not there,” Bell said of the reports, “then wouldn’t people who are focused entirely on U.S. trade and economics, or people focused on some other aspect of global affairs, say climate change, just go about their business?”