(RNS) Nothing upsets the folks in the pews as much as changing the liturgy that they’re accustomed to, and that seemed likely to be the case when the Vatican ordered revisions to the familiar prayers and rubrics of the Catholic Mass.

But now, more than a year after the changes took effect in U.S. parishes, a survey of American priests shows that they are more disturbed by the innovations than their flocks. 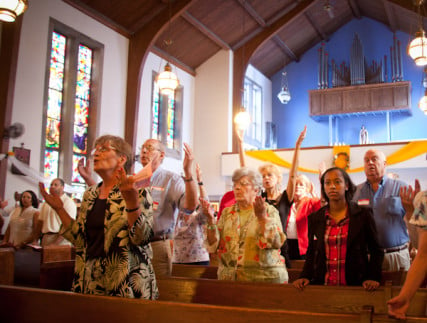 In fact, the poll, conducted by researchers at St. John’s University School of Theology-Seminary in Collegeville, Minn., showed that almost 60 percent of priests surveyed did not like the new Roman Missal, as the liturgical book for the Mass is known, while about 40 percent approve.

“The high level of dissatisfaction among priests should be a grave concern for the bishops, assuming they care about what their priests are thinking and feeling,” the Rev. Michael Ryan, a Seattle priest who started a petition to rally opposition to the new translation, told the popular liturgy blog Pray Tell.

The clergy critics also have firm opinions on the matter: one-third of priests (34 percent) strongly disagree that the new translation of the Mass is an improvement, and 80 percent say that some of the language is “awkward and distracting.”

That contrasts with polls from last year, which showed that 70 percent of Mass-goers thought that, overall, the first new translation in 40 years “is a good thing.” The approval rating was 84 percent among weekly attenders. (Polls also showed that most Catholics didn’t notice many changes.)

An online survey in February by The Tablet, a London-based Catholic periodical, found opinions among English-speaking Catholics around the world to be sharply divided about the new Mass, with clergy expressing more negative opinions than lay people.

The new translation, which went into effect in the nearly 18,000 parishes in the U.S. in November 2011, was years in the making but took longer than expected when the process was taken over by Vatican-backed conservatives who wanted to make the language sound more like literal translations of the original Latin.

That resulted in formulations that supporters said were more authentic and expressed a grandeur and mystery appropriate for the sacred rites. Critics said the new phrasings were stilted and often incomprehensible.

For example, where the Nicene Creed once explained Jesus’ relationship to God as “one in Being with the Father,” the new version has believers say Jesus is “consubstantial” with God – prompting comedian Stephen Colbert, a practicing Catholic, to quip: “It’s the creed! It’s not the SAT prep.” Pope Francis issued a powerful call for the protection of the environment and of society’s most vulnerable during his formal installation Mass at the Vatican, while qualifying his papal power as a “service” to the church and to humanity. RNS photo by Andrea Sabbadini

One reason that priests may take a dimmer view of the new translation is that they have to use it every day, and have many more parts to say than lay people. They were also paying closer attention to the translation process, which may explain why many of them said they were just as upset with the way the revision was undertaken and implemented as they were with the end result.

More than six in 10 of the priests surveyed said they wanted a revision of the revisions, and they are not the only ones. “While we don’t want to ‘throw the baby out with the bathwater,’ the new missal needs corrective surgery and this should take place without delay,” Bishop Robert Brom of San Diego told Pray Tell.

Whether anything will happen is unclear. The new pope, Francis, appears to prefer simpler liturgical practices, but it’s also not clear that he would want to reopen this can of worms. And senior church officials in charge of liturgical matters either declined to respond to questions from Pray Tell – which is run by a priest who worked on the survey – or questioned the value of the survey.

More than 1,500 priests from around the country responded to the survey, which was conducted from February to May 2013.

News
For many who lost loved ones to COVID-19, this Day of the Dead will be a time of healing
News
Taco trucks and voter guides boost political profiles of faith communities at the margins
Signs of the Times
Six things you need to know about Pope Francis and gay civil unions
News
Vatican and China extend ‘experimental’ agreement on appointment of bishops
Signs of the Times
Dear Pope Francis, six reasons you should wear a mask