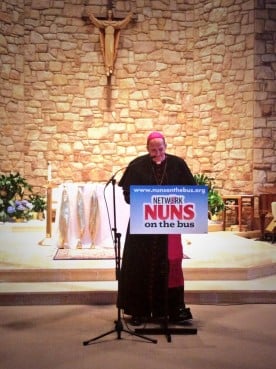 Trenton Bishop David O’Connell at a service for the “Nuns on the Bus” immigration reform tour.
Photo via Network’s Twitter feed: http://bit.ly/12RpWxi

Richard Land is out the door at the Southern Baptist Convention’s Ethics & Religious Liberty Commission but Al Mohler is standing firm, and today lays down this marker: “No issue defines our current cultural crisis as clearly as homosexuality.”

He adds, ominously: “Can we count on evangelicals to remain steadfastly biblical on this issue? Not hardly.”

What evangelicals believe about faith isn’t exactly what secular folks think it is, T.M. Lurhman writes in an interesting column in the New York Times:

“I saw that people went to church to experience joy and to learn how to have more of it. These days I find that it is more helpful to think about faith as the questions people choose to focus on, rather than the propositions observers think they must hold.”

Cue Cicely Tyson leading a rendition of “Blessed Assurance” in the Broadway revival of “The Trip to Bountiful,” and be sure to read the accompanying story about how this classic Protestant hymn made it into the play, and how the audience reacts.

Anyone have a favorite version? Mine always go back to the Billy Graham days, Cliff Barrows et al. Here’s Alan Jackson performing:

The Richmond Outreach Center is a megachurch with some megaproblems with its pastors.

All those Blue State folks exchanging high fives over Michele Bachmann’s exit from Congress? Well, her retirement actually makes it more likely that the GOP will hold her seat, says Larry Sabato.

And Bachmann tells The Onion that she is leaving “because God wants her to earn millions of dollars working for a high-powered lobbying firm.”

Stop! Don’t Facebook that story! It’s satire. But it’s the kind of thing Bachmann made possible, which is one reason we in the media will miss her.

It’s almost June, the big month for weddings, and here’s something I didn’t know: Catholic fathers don’t give away the bride. Michelle Arnold explains.

If you need a further clarification you can check in with the new doctrinal watchdog for the U.S. Conference of Catholic Bishops, the Rev. Peter Ryan.

He’s a Jesuit – who isn’t in the church these days?

The nuns are back on the bus, this time riding for immigration reform. My story is here, but just as interesting is that they seem to be drawing support from their erstwhile antagonists, the bishops. Trenton’s Bishop David O’Connell, pictured above, gave them a blessing and had strong words about supporting immigration.

He also got a standing ovation from the congregation, having come out despite a painful illness. (Bill Donohue, call your office.)

Another interesting nun-bishop moment in the offing: Sister Jeannine Gramick, longtime Catholic advocate for LGBT equality, will “engage in a conversation about marriage equality” with Bishop Thomas Paprocki of Springfield, Illinois on Friday evening in Phoenix, Arizona. Good for them. Wish I could be there.

(Point of interest: This is also the date in 1431 that Joan of Arc was burned at the stake at the instigation of a bishop. But she was made a saint, though that took another 500 years.)

Another interesting development: A gay athlete comes out at a Catholic college, Benedictine College in Kansas. That’s no liberal outpost, and from the president on down they are welcoming Jallen Messersmith, a point guard and cradle Mormon. Stay tuned.

Less certain, perhaps, is the future of the Rev. Gary Meier, a Catholic priest from St. Louis who has come out as gay. “I have tried over the years to reconcile my silence as a gay priest with that of the Church’s increasingly anti-gay stance. I have been unsuccessful,” Meier says. Tim Townsend has the story.

Cathleen Falsani finds hope and wholeness in her son’s return to Africa, and Jonathan Merritt, also in Malawi, writes about the church in a land of climate disruption.

The non-sense of an ending? Gallup says American support for physician-assisted suicide is down, but 70 percent favor allowing doctors to hasten a terminally ill patient’s death. Words matter, it seems.

Here’s a real ending, from Pope Francis, writing to a friend in Argentina:

“I didn’t want to live in the Apostolic Palace. I go there only to work and for audiences. I live in Saint Martha’s House, which is a boarding house, where we were guests during the Conclave. It houses bishops, priests and laymen. I am visible to people and I lead a normal life. A public Mass in the morning, I eat at table with everyone, etc…All this does me much good and avoids my being isolated.”

Hopefully the Daily Religion Roundup is another connection. I wonder if the pontiff has signed up? It’s free.