(RNS) Missouri Gov. Jay Nixon has vetoed a bill that would have made his state the seventh in the nation to prohibit judges from considering Shariah, or Islamic law, and other “foreign laws” in their decisions. 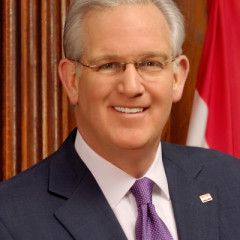 But rather than citing the usual arguments about anti-Muslim discrimination and the freedom of religion, Nixon introduced a new argument against such legislation, asserting it would make it harder for Missouri families to adopt children from overseas.

Nixon said if state judges would not be able to consider foreign decrees that are sometimes required to finalize adoptions, adoptive families and children would be left stranded.

“This legislation seeks to solve a problem that does not exist, while creating the very real problem of jeopardizing Missouri’s families’ ability to adopt children from foreign countries,” Nixon, a Democrat, said at a news conference Monday (June 3) held at the St. Louis office of Lutheran Family and Children’s Services of Missouri, which helps arrange foreign adoptions.

The Rev. Alan Erdman, president of the Missouri agency, said the bill “would spell disaster for children and families, in addition to increasing the costs and processes that govern these adoptions.”

State Sen. Brian Nieves, who introduced the bill in February, called the governor’s reasoning for his veto “gibberish.”

“His assertion that the bill somehow interferes with foreign adoptions is absurd,” said Nieves.

Nieves, a Republican, could try to override the veto; a veto override requires a two-thirds majority in both chambers, and the bill had the support of 24 of 34 senators and 109 of 167 state representatives when it passed earlier this year.

Given how close the initial vote was, opponents believe they can peel away the one or two votes needed in either chamber to defeat an override effort.

“Now that people know the arguments against these laws and what kind of problems they can cause, we’re confident that we can encourage enough legislators to be against the override,” said Faizan Syed, executive director of the St. Louis chapter of the Council of American-Islamic Relations.

Anti-foreign law bills have been proposed in roughly 30 states. Supporters say the laws prevent courts from imposing harsh sentences under Shariah, but critics say they single out Muslims and tie judges’ hands in family law or contract disputes.