(RNS) The go-to number in American religion is “ASA” — average Sunday attendance. Or as an irreverent colleague put it, “Fannies in the pews.”

It’s a meaningless metric, but it’s easy. Open the doors on Sunday, wait for the stragglers, then dispatch ushers to count the house. 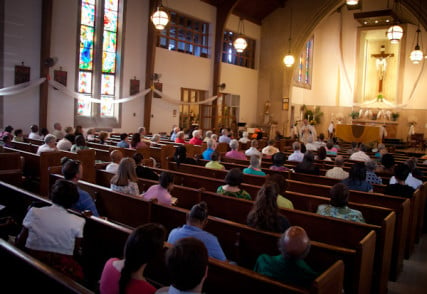 Parishioners listen to the homily during Catholic mass at St. Therese Little Flower parish in Kansas City, Mo. on Sunday, May 20, 2012. RNS photo by Sally Morrow

Entire methodologies for church development have been built around this number, as if fanny count dictated how a church should behave.  Problem is, ASA isn’t a useful measure of quantity, and it says nothing about quality.

Those are difficult metrics to track, of course, and that’s why many congregations stick to ASA and shun the harder work of measuring outcomes and impact.

Now consider how many useless metrics we use to chart our nation’s course. Politicians fixate on the federal deficit, for example, because it’s an easy number to fling at opponents, even though it doesn’t truly measure the nation’s economic well-being.

Same with the official unemployment rate — which measures one small flow in a deepening pool of economic despair.

Same with the “approval ratings” that give shallow insight into popularity, but say nothing about quality of leadership.

Politicians and edu-crats force public schools to measure performance through standardized tests that yield simple PowerPoints and talking points, while they ignore actual learning, as well as readiness for adulthood, teacher morale and return on investment. A one-day test, the SAT, is misused as the key to college admission.

We stick to meaningless metrics for two reasons. First, they are easy to make, and lazy leaders love the easy.

Second, simple metrics make good weapons, whereas complex metrics that actually say something require subtlety and in-depth analysis. If you want to smite an organizational or political foe, draw a simple chart showing decline in one metric. To fight back, cite another metric that looks better.

They sell people short. Most of us can deal with complexity — we raise children, after all. We know from firsthand experience that an A in history pales beside a grasp of history. Or that being on the plus side of a simple unemployment statistic doesn’t mean we feel usefully employed or confident about our futures.

We know the real truth beneath the numbers used to peg us, such as our credit score and family income. We know our truth lies elsewhere. We wish people cared more about that truth.

In the end, we lose confidence in the metrics and in the leaders who wield them. In the church world, where I work, inadequate metrics means leaders were flying blind as the world changed, and failed also to see systemic changes inside the bubble.

I think citizens are quite capable of understanding an economic world deeper than partisans’ scare tactics. Politicians apparently want to keep us ill-informed. Like an usher counting fannies, it makes their work easier.