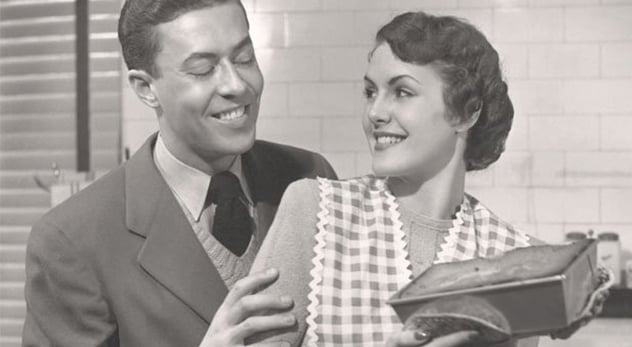 Some American evangelicals say the Bible prescribes universal, timeless roles for men and women. But others say these discussions are a post-industrial phenomenon.

Yesterday, I wrote about the growing gender debate in society and among evangelicals. One point of discussion with the individuals I interviewed was the history of these debates. Some felt the Bible prescribes timeless, universal, complementary roles for men and women, while others argued that these discussions have been influenced by culture and history.

Rachel Held Evans, egalitarian author of A Year of Biblical Womanhood, holds to the latter position.

“This is not really a new conversation for evangelicals. We’ve been having this for a really long time. We’ve been wrestling with a prevalent narrative that men should be the earners and women should stay at home,” said Evans. “But this is more of a cultural phenomenon than a biblical one. It’s a product of the post-industrial revolution where we had the Cleaver family as the standard. In more agrarian societies, we’ll see women sharing the responsibilities for earning and running the household with men.”

She argues this point at length on her blog in a new post titled, “Why the church can support ‘breadwinning’ wives too.”

Mimi Haddad, president of Christians for Biblical Equality, agrees with Rachel: “We’re looking now at a post-industrial society. Before the industrial revolution, people worked largely on farms. American culture relied on everyone doing work together and women made decisions as well.”

But Scot McKnight, professor of New Testament at Northern Baptist Theological Seminary, says the historical roots of the discussion are more complex than that. He points to a reaction among some evangelicals to the feminist movement in the late-20th Century:

“The equal rights amendment provoked Christian responses from some Christians. John Piper and Wayne Grudem created the Council on Biblical Manhood and Womanhood as a response to what they believed was creeping, encroaching feminism. Because of Piper’s charisma, giftedness, and platform, he basically created the complementarian movement in the United States.

“In the 70s and 80s, complementarianism really got going. It created a groundswell and gained a powerful platform in the United States. Before this movement, there were a number of evangelical males and females who were advocating for the greater openness to female giftedness in churches and elsewhere. The complementarian movement began to resist it. By the mid-80s, it was pretty clear that there were strong advocates for women in ministry and for complementarianism, and they began to spar over various texts.”

But Mary Kassian, author of Girls Gone Wise in a World Gone Wild, says that complementarianism has always been a part of Christian theology, even though feminism forced Christians to name and define it. She says she has been involved in gender discussions for almost three decades and recalls sitting around a table with Christian leaders in the 1980s trying to brainstorm a name for their position.

“At that time—in the 80s—we really thought that given the pressures of society and the feminist movement, the Biblical teaching that says that men and women are complimentary would be a lost concept,” Kassian recalls. “Now I look back over the last 20 or 25 years and I’m surprised that there has been such a resurgence on this among the next generation.”

Owen Strachan, Executive Director of the Council on Biblical Manhood and Womanhood, concedes that there is some truth to what Evans and others are claiming. But he says the Bible’s teachings on gender are timeless and universal, unaffected by cultural or historical fluctuations.

“There is an element of truth in what they say. The household economy has changed over the centuries. No complementarian is making the case that there is a static understanding of gender roles across countries and eras,” Strachan says. “But the Bible is obviously the ultimate authority for a believer, and as a Biblical Christian, I’m not able to do theology by sociology. I have to do theology according to the Biblical text and take up whatever life plan the Bible tells me to take up.”

And yet, we also can’t pretend that we read and interpret the Bible in a vacuum. As E. Randolph Richards and Brandon O’Brien state in Misreading Scripture with Western Eyes, “In whatever place and whatever age people read the Bible, we instinctively draw from our own cultural context to make sense of what we’re reading.”

All Bible reading is contextual, and there is no one who encounters the text with complete objectivity. So we must bring our historical and cultural contexts into conversation with our interpretations.

A quick review of history seems to support the notion that prior to the industrial revolution, women shared the family workload and decision making. Accounts of 18th and 19th century home life shows that women asserted leadership within those settings as often as men. Agrarian societies are often even more egalitarian in this respect. And who will deny that American evangelicals have reacted against second wave feminism? Something more seems to be at work in this discussion than “because the Bible says so.”

Christians must now determine how (not if) our views on gender have been shaped by our cultural contexts, even though this debate must ultimately be had while standing on a Bible, not a history book.

On Faith and Culture
How will the post-pandemic church pay the bills?
News
In Oregon, churches and anti-fascists unite to provide mutual aid to fire evacuees and others in need
News
Citing Scripture, Pence switches out Jesus for the American flag in convention speech
General story
Trump was right. God can be hurt. But not by Biden election, say theologians
News
Apt Bible passage at Catholic Mass coincides with earthquake
© Copyright 2020, Religion News Service. All rights reserved. Use of and/or registration on any portion of this site constitutes acceptance of our User Agreement and Privacy Policy, Privacy Statement and Cookie Notice. The material on this site may not be reproduced, distributed, transmitted, cached or otherwise used, except with the prior written permission of Religion News Service.