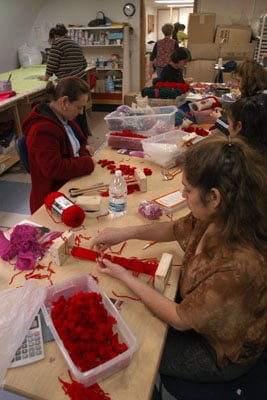 (RNS) Conservative activists are threatening the social justice mission of the Catholic Church just when the country needs it most, a new report charges, by attacking the church's flagship anti-poverty program with 21st-century style "Catholic McCarthyism."

The report, released Tuesday (June 11), says the Catholic Campaign for Human Development is hamstrung by conservative purists who make it impossible for the church to join with other programs or agencies to combat the systematic causes of poverty.

“A small but well-financed network has emerged as a relentless opponent of the bishops’ social justice campaign, which has long been recognized as one of the most influential funders of grassroots community organizing,” writes John Gehring, who authored the 24-page report for Faith in Public Life, a Washington-based lobby of religious progressives.

What may be most significant about the report is that it has won strong public backing from prominent bishops and church leaders, including two former presidents of the U.S. Conference of Catholic Bishops.

With a new pope who has made a priority of championing the poor — even if it means linking arms with nonbelievers — defenders of CCHD and social justice are finding an assertiveness that was missing during the more hardline papacies of Benedict XVI and even John Paul II.

“I’m confident that if Pope Francis knew about the CCHD program he would say, ‘God bless the American bishops!’ for doing what they can to help the poor,” said retired Archbishop Joseph Fiorenza of Galveston-Houston, a former USCCB president, before heading to this week’s closed-door meeting of the nation’s bishops.

The CCHD distributed $9 million in grants to community groups and social action initiatives last year, but in recent years the program has drawn renewed fire from church conservatives who say its programs favor liberal economic policies.

Critics also accuse the program of working with non-Catholic groups that undermine battles against abortion and gay rights that they say should dominate the bishops’ agenda.

A number of bishops and some parishes have halted or discouraged CCHD collections in their dioceses after hearing charges – almost all of which have proven unfounded – that the CCHD funds groups that promote same-sex marriage or reproductive rights.

“Using guilt by association and other tactics from the McCarthy-era playbook,” Gehring writes, “these activists are part of an increasingly aggressive movement of Catholic culture warriors who view themselves as fighting for a smaller, ‘purer’ church.”

The decades-long tug of war over the CCHD closely tracks the fissures that are dividing the Catholic Church – splits between political liberals and conservatives; and between those who want to engage the world and those who want to rally a tradition-minded core against a secularizing society.

On a larger scale, the fight over CCHD reflects a longstanding divide over whether a few litmus-test issues — most of which do not include social justice concerns — can or should define what it means to be a Catholic in America.

The two former USCCB heads — Fiorenza and retired Bishop William Skylstad of Spokane, Wash. — were joined by eight other bishops and a who’s who of more than 30 Catholic social justice activists, including former USCCB officials, two past CCHD executive directors, and several well-known priests and nuns.

“At a time when poverty is growing and people are hurting, we should not withdraw from our commitment to helping the poor,” Fiorenza, who headed the USCCB from 1998-2001, is quoted as saying in the report. “Catholic identity is far broader than opposition to abortion and same-sex marriage."

The bishops' meeting in San Diego will be the first gathering of the U.S. hierarchy since Francis’ election, and Fiorenza said he hoped that their awareness of the pontiff’s priorities would encourage bishops who have opposed the CCHD “to take another look.”

'I'm really tired of being defensive'

The CCHD was begun in 1970 and is supported by an annual collection in the nation’s parishes. It was hailed by John Paul II for “removing the causes of poverty and not merely the evil effects of injustice.”

But conservatives always chafed at the program’s liberal-sounding approach and they ramped up their criticism and activism in the wake of the 2008 election of President Obama, who worked with CCHD-backed groups as a community organizer in Chicago.

In 2009, a coalition called “Reform CCHD Now” was formed by the American Life League, one of the most vocal anti-abortion lobbies, and it has spearheaded the opposition by raising questions about groups that receive CCHD grants.

On Tuesday, a spokesman for "Reform CCHD Now" said the group stood by its charges that CCHD continues to fund grantees that are "involved directly in the promotion of contraception, abortion and homosexual activism."

Rob Gasper also rejected the accusation that the "Reform CCHD Now" coalition is pursuing a “guilt by association” approach. Rather, he said, “if a CCHD grantee joins a coalition that has as one of its operational goals the promotion of items against Catholic teaching, then that grantee is guilty by participation.”

A 2011 memo from two bishops who oversee the CCHD for the hierarchy said all but one of the many accusations against the CCHD were unfounded and they denounced “the repeated accusations of those with clear ideological and ecclesial agendas.”

But the anti-CCHD campaign continued, and it has succeeded in having a number of grants rescinded by arguing that some recipients worked with organizations that do not always endorse or promote the church’s teaching on sexuality.

In 2012, for example, Companeros, a small nonprofit in rural Colorado that helps immigrants, lost CCHD funds amounting to half of its budget because of its association with a statewide immigrant rights coalition that included a gay and lesbian advocacy group. Companeros itself does not work on gay rights.

Also, in the past year alone, five affiliates of the Gamaliel Foundation, one of the nation’s largest faith-based networks, lost CCHD funds because of charges, which it rejects, that Gamaliel is an “organization promoting homosexuality” and supporting abortion rights.

“I’m really tired of being defensive,” David Liners, who heads a Gamaliel affiliate in Wisconsin, says in the report. “Just the act of being defensive gives credence to these people. As a Catholic, I find all of this unspeakably painful.”

The coalition has also gained traction with the growing political conservatism of the U.S. hierarchy and its staff in Washington. Several bishops have halted the annual CCHD fund drives or have raised so many hurdles for funding that only select, church-run groups can qualify.

That has undermined the program’s effectiveness and led some church officials to resign in protest, the report says.

“Many of these critics are bomb throwers who believe that by destroying the credibility of those working for social justice they will somehow enhance the pro-life agenda,” Tom Allio, who retired as Social Action Director for the Diocese of Cleveland, is quoted as saying. “Nothing could be further from the truth. They want to make social justice and faith-based organizing dirty words.”