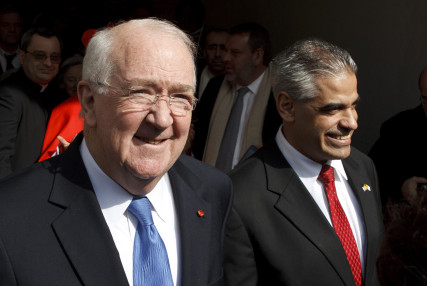 President Obama on Friday nominated Ken Hackett, former head of Catholic Relief Services, to be the next U.S. ambassador to the Vatican.

It’s a savvy move, picking a Catholic whose career in the church has been dedicated to alleviating suffering as America’s representative to a pope who has made helping the poor a priority for his pontificate.

Hackett replaces Miguel Diaz, who left the post last November to teach at the University of Dayton. Diaz is a theologian, which was a first for the U.S. ambassador to the Holy See, and that also seemed to make sense in that Pope Benedict XVI, whose retirement led to the election of Pope Francis last March, is a renowned theologian.

Usually the Vatican posting has gone to political appointees or as a reward to longtime friends of the president. After all, a posting in Rome is not a bad digestivo for a retiring public servant.

There had been some consternation that Obama hadn’t named an ambassador sooner. But the administration isn’t known for acting too swiftly on judicial appointments either, and when Benedict announced that we would be resigning in February it behooved the White House to see who emerged as the new pope.

Hackett seems very much in synch with Francis. He is also familiar with Rome and Rome with him, and he has contacts across the U.S. church and is highly-regarded for his career at CRS — even if CRS is not a favorite of influential political conservatives in the American church.

Hackett served on the Board of Directors of George W. Bush’s Millennium Challenge Corporation for five years, and he has ties across administrations. He is reported to be close to Denis McDonough, Obama’s chief of staff, whose brother is a priest.

Hackett’s name had been circulating as a potential candidate, as had two other well-known Catholics who have close political ties to Obama: Stephen Schneck of Catholic University and Nicholas Cafardi of Duquesne’s law school.

The prospect of either Schneck or Cafardi drew preemptive strikes from Catholic conservatives who said appointing either of them would be like poking a stick in the collective eye of the American bishops.

But whatever their views on CRS, it is unlikely Ken Hackett will prompt much pushback.

Besides, Hackett is no James Costos, the former HBO exec and Obama fundraiser who is gay — and was also named Friday as U.S. ambassador to Spain, one of the world’s most Catholic countries (after the Holy See, natch).

The nomination of Costos had been rumored for months and his sexual orientation likely explains the late Friday afternoon announcement time.

Hackett’s noncontroversial appointment is a nice balance. As National Catholic Reporter’s John Allen wrote in January, the appointment was going to be important to Vatican officials “because it signals what kind of relationship Obama wants to have (with the Holy See) during his second term.”

“Filling the slot tends to be a special headache for Democratic presidents because they have to find somebody who can pass muster both with their party and with the Vatican. The custom that it has to be a Catholic complicates things further, because it’s not just a candidate’s policy positions that might cause problems, but his or her internal standing in the church.”

Hackett would seem to satisfy all the requirements — the only question now being whether his voice will be heard at Foggy Bottom.

From the White House announcement:

Ken Hackett is a consultant to the University of Notre Dame’s Institute for Global Development. In 2012, after 40 years of service, he retired from the Catholic Relief Services (CRS), where he was the President and CEO from 1993 to 2012. Prior to serving as President and CEO, Mr. Hackett was East African Regional Director from 1992 to 1993. From 1987 to 1992, he served as the Country Representative in the Philippines. From 1986 to 1987, he was Senior Director of External Affairs, and from 1978 to 1985, he was the African Regional Director. He began his career with CRS in 1972 as a staff member in Sierra Leone. In addition to working at CRS, Mr. Hackett was North American Vice President of Caritas Internationalis from 1996 to 2004. From 1996 to 2011, he served as a member of the Pontifical Commission, Cor Unum, the Vatican body that coordinates the Church’s charitable work. From 2004 to 2009, he served on the Board of Directors of the Millennium Challenge Corporation. Mr. Hackett served as a Peace Corps volunteer in Ghana from 1968 to 1971. He received a B.S. from Boston College.

Posted in
Culture David Gibson: Sacred and Profane Institutions Opinion
Support RNS and get your donation doubled
Get the RNS spiritual guide to the 2020 election