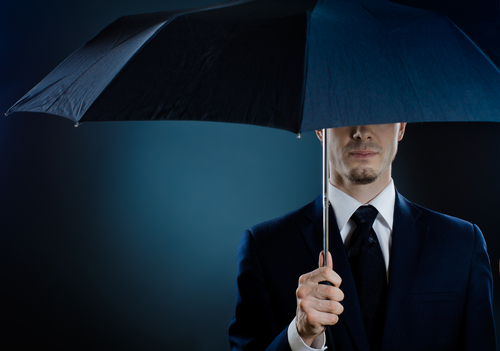 Portrait of a man in a suit with an umbrella courtesy Shutterstock
June 18, 2013
Tom Ehrich

(RNS) After denials and evasions, we learned that two successive administrations lied to the American public about unprecedented spying on ordinary citizens.

The latest phase of this longtime spying effort began shortly after 9/11 and accelerated steadily, as the government used existing laws and newly passed laws to demand access to supposedly private information, such as cell phone call logs and email data.

It might have begun as an effort to track foreign terrorists as they interacted with allies in the U.S. and visited the U.S. But it spun out of control as the National Security Agency decided it needed to spy on all citizens. Pillars of the Internet world such as Google, Facebook and Microsoft were compelled to turn over vast amounts of data, as were communications firms, including Verizon and AT&T. One report said the head of the NSA thought the entire Internet should come under U.S. government control.

Meanwhile, the national intelligence director blandly denied any such program in testimony to Congress. Such apparent falsehoods could merit criminal prosecution.

Defenders of the so-called surveillance state consider such spying a necessary response to terrorism. I disagree. But the larger point is lying itself. When a government lies to its people -- not just short-term omissions to protect sensitive missions, but sustained, systematic lying to prevent detection of something the citizenry would likely fear and detest -- it breaks a covenant with the people.

For better or worse, the government is accountable to the people -- the people whom it presumes to tax and regulate, as well as send into harm's way.

Maybe the public doesn't deserve to be held in the implied esteem of a democracy. We are fickle, often uninformed, and likely to shirk our own duties, such as voting. Maybe some would panic if they knew all that endangers them.

But those shortcomings call for information, not the withholding of information; guidance by the wise, not denial by the deceitful; transparency, not layers of obfuscation.

The government must trust the people. If we don't show ourselves worthy of such trust, we need to be held accountable, but not spied on or repressed. Systematic lying merely makes us trust less and produces a downward spiral into tyranny by the arrogant, fueled by disdain.

Those who considered Barack Obama a breath of fresh air in the cynical world of Washington's corruption are profoundly disappointed. Was he that easy for the NSA to turn? What others have found him a pushover? Has anyone been looking out for the people?

Those spying on us claim they have foiled "dozens" of terrorist attacks. Who now believes such claims? A bomb-laden Jeep in Times Square, after all, was discovered by accident, not government surveillance.

Even if they have stopped terrorists, the cost of doing so has been too high for a freedom-minded nation that only exists because diverse people have some base level of confidence in each other, in their armed law enforcers, and in their government.

When that confidence evaporates and people take safety and then vengeance into their own hands, we have chaos far worse than anything a determined terrorist could provoke.

As it is, everything comes under suspicion, from safe food to reasonable precautions against fraud. When the wealthy can buy a government, and that government preys on its own people, we have a crisis of identity and existence.