In speaking with social activists, there is often a nostalgia for the protest music of the 1960s and 1970s, music that brought together love and protest, a message of revolution and social justice.  It’s a who’s who of great artists and unforgettable songs: Dylan’s “Masters of War” and “the Times, they are a-changin’”;

Pretty much anything by Pete Seeger like this or this ,
John Lennon’s Imagine or“Give Peace  a Chance”,
Edwin Starr’s “War”,
Phil Ochs’ “I ain’t marching anymore”,
Billie Holiday’s haunting “Strange Fruit”,
Sam cooke’s “A change’s Gonna come”,
Cat Stevens’ “Peace Train”,
Nina Simone’s powerful “Mississippi Goddam.”
Bob Marley’s “War”,
Sweet Lord anything by Mahalia Jackson, such as “Amazing Grace“, or “We shall overcome”
Marvin Gaye’s “What’s going on”,
and on and on.

Well, fear not, music/social justice lovers.   There are still places where music and protest are fused together in beautiful ways.   One such place is Turkey, and in particular Gezi Park and the Taksim Square protests. Here is one of the songs that has become iconic for the Gezi Park protestors.   The simple song is called Tencere Tava Havasi (“Sound of Pots and Pans”), sung by a band called Kardeş Türküler (Turkish Folk Songs), that was initially formed as a folk group at Boğaziçi University.   The song has already been viewed more than a million and half times on Youtube.  The band itself is characteristic of much of the Gezi Park protestors in bringing together Turkish, Kurdish, Arabic, Armenian, and other themes.   Here is their website:       The name of the song (“Sound of pots and pans”) is a reference to protestors and their supporters banging on pots and pans in the initial stages of the protests. You prefer Jazz?  There is also beautiful jazz choir at Gezi park.

After the terrifying tear gas and water canons, somehow the Turkish protestors managed to get a piano onto Taksim square.   And there it was, in the very aftermath of the brutality and the violence, there was music.   There was beauty.     There was a young man, still with hard hat on to protect himself from the police projectiles and tear gas, playing beautifully.   Around him were thousands of protestors, united for once.     For a few minutes, there was no need for slogans, for pamphlets, for banners.   The wordless music said all that had to be said, and all that needed to be heard.    This was not a concert hall performance, not the flawless elegant performance of a virtuoso.   Somehow it was more…raw, more real, less perfect.   And fully beautiful.    In that way, it was very much like the protestors themselves.   The music fit the imperfect beauty of the community.   You can see two footages of the concerts at Taksim here
and here. 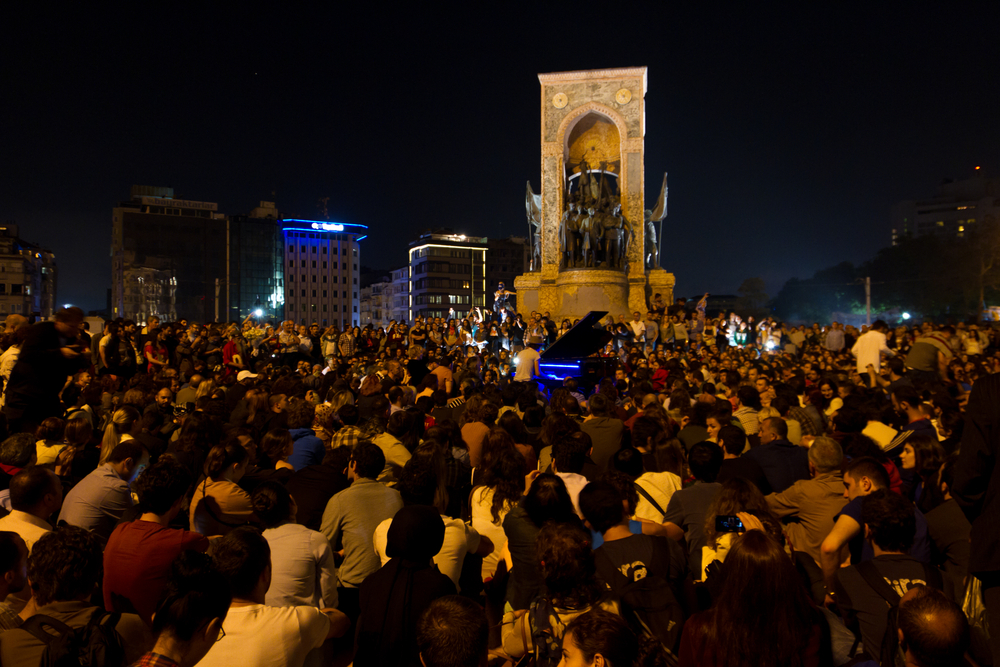 And if you looked carefully, you could even see a few of the riot police in the background.   It was lovely, actually.   People who a few hours ago were hurling toxic gases at one another, were now brought together by the unifying power of music.    This was a reminder, even if only for a few fleeting minutes, that we as human beings are meant to be together, brought together by forces of love and beauty, forces that begin in another realm and flow through us, binding us together, and delivering us home.

There is more.   Do you remember that rousing song from Les Miserable, “Do you hear the people sing?”   You might recall the version from the musical here, or the movie version here.   Well, sometimes life imitates art.    The protestors at Gezi park ended up singing a beautiful version of that song here, voicing their own song of protest.  Here is their video to the famed lyrics: 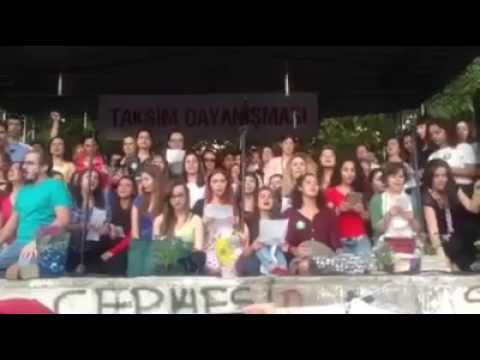 Do you hear the people sing?

Singing a song of angry men?

It is the music of a people

Who will not be slaves again!

When the beating of your heart

Echoes the beating of the drums

There is a life about to start

Will you join in our crusade?

Who will be strong and stand with me?

Is there a world you long to see?

Music is universal, and almost be definition begs to transcend boundaries, bringing human beings together in universal pursuits.    One of the icons of the 1960s protest, Joan Baez, herself has dedicated this message and song to the Turkish protestors. 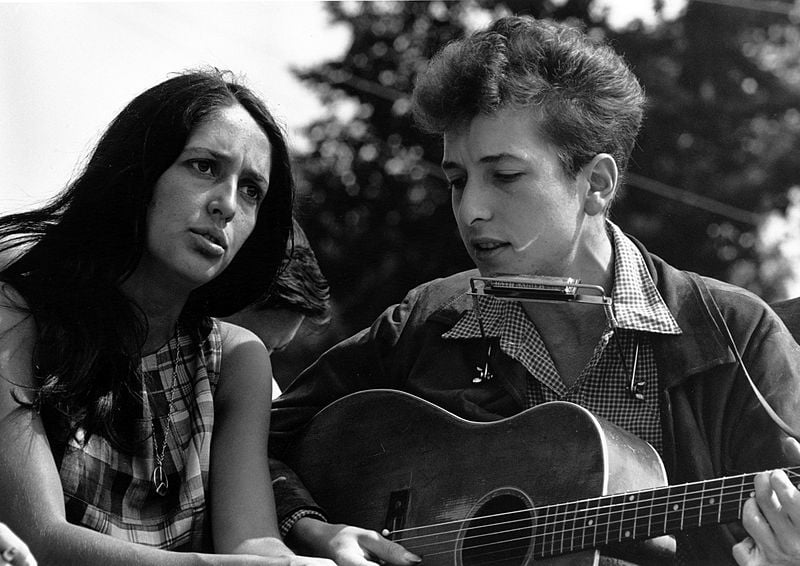 Dear Turkish People,  I would like to express my support for the Turkish citizens, lawyers, doctors, youngsters families, students, the people with belief in their heart, who are fighting courageously and peacefully to preserve the heart of your culture, the beauty of your land, and the soul of your people. Your voice has been heard everywhere, and I am greeting you now.

Baez then went on to sing the “Imagine” classic by John Lennon, and dedicated it to Turkish people.    Baez’s lovely message was quickly carried on Turkish activist sites. Ultimately that’s what so amazing about music at Gezi park. It’s not about the notes. It’s not about the words, or the melodies.  It’s ultimately about us, all of us.  It’s about the ways in which there is now a new generation of people—many of them young or young at heart—who share many of the same aesthetics, same social consciousness, and same ethical commitment.   And it is this new generation of humanity, those who care about the well-being of one another beyond the narrow confines of nationality, race, creed, or class, that give us hope.   They give us hope that they will be able to sing together, make music together, make love together, and make of this old world, a new world.

Update:   According to the Guardian, the Turkish police have confiscated the piano used by Davide Martello to serenade the protestors at Taksim square during his by now legendary 14-hour performances.

Images are from shutterstock and Wikipedia as well as Turkish activist media.
I am deeply grateful to Christy Gruber and Ellen Porter for sharing their passion about music and justice with me.    My journey through music, life, and Turkey is made infinitely richer through their friendship.