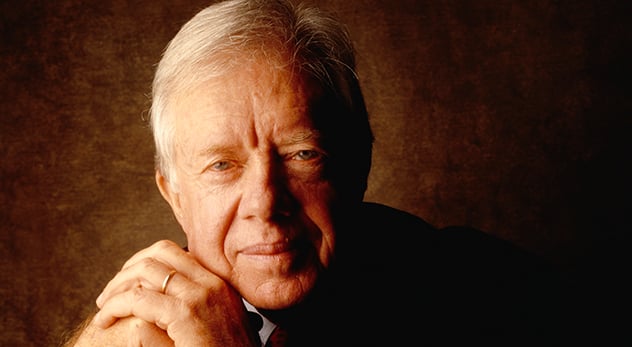 The 88-year-old and 39th President is leading a conversation on religion and women’s rights through his Center in Atlanta, GA – Image courtesy of Zondervan

The following is part two of my interview with Jimmy Carter, the 39th President of the United States. Click HERE to view the first installment.

JM: When the Southern Baptist Convention asserted that wives should submit to their husbands, you famously severed ties with the denomination. Do you stand by that decision?

I belong to a church in Plains that has a man pastor and a woman pastor. We have six deacons and it so happens that, at the present time, half of them are women and half of them are men. My wife happens to be a deacon now in our church. That would not be permitted—or approved, let’s say—in a Southern Baptist church.

JM: What would be your message to the Southern Baptist Convention today?

A: I think that women should be treated exactly equal with men. That was basically what was done in their past history, and it is what a lot of people believe, even those of us who have some ties with the Southern Baptist Convention.

JM: A lot has changed since you were President. When you look at our country today, what gives you the most hope?

JC: I think the long term trend in our country is to more equality and opportunity among the races of people and among people who have different beliefs toward religion and even sexual preferences. I think that trend is toward equality. We still go a long way from honoring all the principles of the Universal Declaration of Human Rights. I would guess that of the 30 paragraphs in that declaration, that was approved by all the nations on earth in 1948 and most since then, we’re now violating about ten of those in terms of privacy of citizens and complete equality in society.

And so I think we have a long way to go. Step by step, sometimes faltering, we go forward. I think that we have been mistaken in the past week in striking down some provisions of the civil rights acts of 1965. Those have not been consummated, and I think this is going to open up Georgia and other Southern States to take actions that may deprive minorities and poor people and possibly elderly people and others of the equal right to vote with those who are more influential and affluent. So some steps backward, but in general terms and from generation to generation, we move toward more equality.

JM: Any reaction to the Supreme Court’s DOMA decision?

JC: I was in favor of those two rulings on marriage. I was against the ruling on the civil rights act.

JM: As a Christian person and one who has lived a lot of years on earth, how has your faith shaped what might be the next phase of your existence after you pass on from planet earth?

JC: I have a basic Christian faith in life in the hereafter, provided we have faith in Jesus Christ. That’s what the Bible teaches and that is what I teach in my lessons. I teach Bible lessons in my local church about 35 or 40 Sundays a year. This is something about which I don’t worry. I believe our life with God is continuous, obviously including our years on earth. And this is something that is very reassuring to me. It gives me the ability to hope, to take long-term attitudes toward my relationship with God and my fellow human beings. And this is what I teach regularly in my church.

JM: Do you look forward to the afterlife?

JC: Well, I don’t look forward to it. I’m not eager to end this life. But I don’t look to it with any fear or trepidation. I don’t know what it is going to be like. I know what the Bible teaches. It teaches, basically, if I remember, that it is like when you plant a peanut seed or a seed of corn, that is the present life. You can’t look at a seed and totally tell what it is going to become when it sprouts and, with God’s help, produces fruit. You don’t know what’s going to come. That’s the vision explained in the New Testament, and that’s reassuring to me.