(RNS) Producers of the latest reboot of the “Superman” franchise famously marketed the movie to Christian audiences. Makers of the new “Lone Ranger” movie, not so much.

There’s a reason for that. If “Man of Steel” panders to Christians, in “The Lone Ranger,” Christians are portrayed as unattractive, ineffectual, hateful or flat-out hypocritically evil. 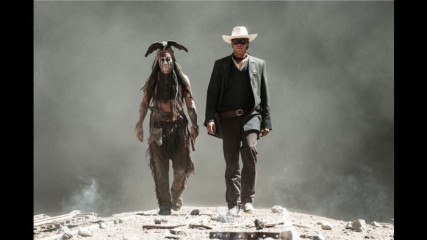 Like so much in this mess of a movie, it’s an ingredient that doesn’t make a ton of sense.

(Spoiler alert: I’m not going to give away much, but if you’re the type who wants to know nothing about a movie, come on back after you see it.)

Clocking in at two-and-a-half hours, “The Lone Ranger” can’t decide if it’s an homage to the graphically bloody Westerns of Sam Peckinpah or the slapstick of Mel Brooks’ “Blazing Saddles.”

And yes, I get that it needs to restate the basic facts of the origin of the Ranger, but a previous Ranger movie handled that issue in a song that only took a bit more than two-and-a-half minutes (hi-yo! hi-yo!), including that stirring section from the William Tell Overture.

Religion and spirituality are wound through the plot of the new film. Some of it is about Christianity and a lot of it at least appears to be about American Indian beliefs.

The Indian stuff is tossed together as what seems to be pastiche or parody. Tonto is much more of an equal partner than sidekick here.

But from the dead bird on his head to never removing his war paint to some of the “religious” elements he tosses at the Ranger, he’s anything but authentic to anyone who knows even a smidge about real Comanche tribe beliefs and practices.

Halfway through the movie, however, we suddenly discover that Tonto is no-kidding crazy, left mentally unbalanced as a boy by the slaughter of his friends and family. Even the surviving members of his tribe laugh at him. Which I suppose gives us in the audience license to laugh, too. Ha ha.

We first meet the man who will don the mask as he sits in a train car otherwise filled with annoyingly hymn-singing Presbyterians. Their musicians are crummy and their singing is off-key.

Asked if he wants to join their prayers, the future Ranger brandishes a copy of John Locke’s “Two Treatises on Government” and explains, “This is my Bible.”

Attacked moments later by outlaws, the Presbyterian pastor’s attempt at a nonviolent resolution is met with a bullet to the leg. Take that, blessed peacemaker.

Later in the movie, we spot the pastor again, limping and wild-haired and all but frothing at the mouth as he screams “Heathen!” as the Ranger and Tonto ride by.

There’s at least one more prayer in the movie — offered by the man who turns out to be the most vile villain in the story. I guess we’re supposed to understand that as irony. Later the bad guy explains why he’s willing to slaughter so many innocents to gain power and money: “Nothing is accomplished without sacrifice.”

Which I suppose could be understood as an ironic inversion of the Christian message. Clayton Moore (September 14, 1914 – December 28, 1999) was an American actor best known for playing the fictional western character The Lone Ranger from 1949–1951 and 1954-1957 on the television series. Photo courtesy Insomnia Cured Here via Flickr

Sectarian religion aside, the Lone Ranger has always been a morality play, upholding specific values. It takes a while for this movie’s Ranger to decide he really wants to take up the mask and mission. But when he does, he doesn’t seriously violate canon.

He defends the weak and protects the innocent. His pistols almost never run out of ammo. He can shoot the gun out of a bad guy’s hand.  (The writers of “Man of Steel” could have taken a lesson here: Superman never kills, guys.)

Fran Striker and George Trendle created the Lone Ranger as a radio show in 1933. Striker was the writer and, according to the Radio Hall of Fame, was aiming for a “solemn, honest hero who was ‘the embodiment of living prayer.’”

Striker famously wrote a creed of beliefs for his character. It begins:

“I believe that to have a friend, a man must be one.

“That all men are created equal and that everyone has within himself the power to make this a better world.

“That God put the firewood there but that every man must gather and light it himself.”

“In my Creator, my country, my fellow man.”

Nothing specifically Christian in any of it. But there’s nothing remotely disrespectful of any religion, either.