BALTIMORE (RNS) Preaching on the Sunday morning after the George Zimmerman/Trayvon Martin verdict seemed daunting. It turned out not to be so.

The worship bulletin was already printed. Hymns had been chosen. So were the readings from the Revised Common Lectionary. It seemed perfectly served up for a guest preacher like me rewriting the sermon on the fly.

Even if the congregation hadn’t already been discussing the verdict, I knew interest would be high. I’ve visited this congregation before. St. Paul’s is the oldest Episcopal church in Baltimore. It is racially diverse, but like most Episcopal congregations, it’s predominantly white.

The opening hymn was, “In Christ There is no East or West.” The second verse lifted the hearts of the congregation. “Join hands, disciples of the faith, what e’er your race may be! Who serves my Father as his child is surely kin to me.” Before the Gospel reading we sang, “Jesu, Jesu,” which includes this chorus: “Fill us with your love, show us how to serve the neighbors we have from you.”

The Gospel reading was from Luke’s account of the Good Samaritan, which has become such a cultural cliche that it always needs unpacking, and especially so on this morning. And so, as I read it out loud I made sure to emphasize the second word:  “A lawyer stood up to test Jesus.”

How to inherit eternal life? When the lawyer quoted Torah law — Love God and love your neighbor — Jesus seemed satisfied. But the lawyer wasn’t. He wanted more.

So then Jesus tells a story about the man left half dead by the side of the road. A priest passes by but doesn’t stop. Neither does the Levite. Why? They were just following the law. Coming in contact with the dead would have made them unclean and temporarily barred them from the Temple.

Luke tells us a Samaritan, an outcast, shows mercy and cares for the victim. Jesus tells the lawyer, “Go and do likewise.” Really? Go and act like a Samaritan? The lawyer must’ve walked away shaking his head. It doesn’t make any sense.

So much of what Jesus says makes no sense to us. He continually urges his followers to overlook rules, customs, even laws in order to be brother and sister to one another. He repeatedly uses outsiders — Samaritans, the man possessed by demons, the Roman centurion — to get his listeners to open their minds and hearts to people of difference.

One way to do that now, I urged, is to take the Episcopal Church’s “Seeing the Face of God in Each Other” anti-racism training. We may not have the “whites only” signs at drinking fountains, but racism in America is still very much alive. It’s just gone underground.

And that was the message from this visiting preacher. Jesus implores us to break down tribal walls if we are to find eternal life and the Kingdom of God here on earth.

I quoted people from my Twitter stream, like Brian McLaren, former pastor of a Maryland nondenominational church: “Praying that the Trayvon verdict will lead to deep change in the American soul. Lord, have mercy.” And this from the Episcopal bishop of Central Florida, Greg Brewer:  “I want to live in a world where George Zimmerman offered Trayvon Martin a ride home to get him out of the rain that night. Come Lord Jesus!”

So by the time we had shared Communion, we were fully ready to sing our closing hymn. “I want to walk as a child of the light. I want to follow Jesus. … In him there is no darkness at all. The night and the day are both alike. The Lamb is the light of the city of God. Shine in my heart, Lord Jesus.” 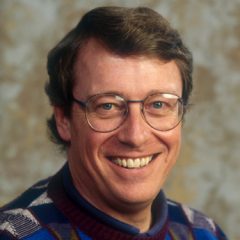 The Rev. Dan Webster is canon for evangelism and ministry development in the Episcopal Diocese of Maryland. He is the former media relations director at the National Council of Churches. Photo courtesy Rev. Dan Webster

As a 65-year-old white man, I know I never had nor would have any idea what it’s like to be profiled. I cannot imagine being a black man or boy who is automatically considered a threat. I just know I don’t want to live in a country or a world that does.

(The Rev. Dan Webster is canon for evangelism and ministry development in the Episcopal Diocese of Maryland. He is the former media relations director at the National Council of Churches.)

News
United Church of Christ declares racism a public health crisis
Follow us on Facebook!
Submit your photos to RNS