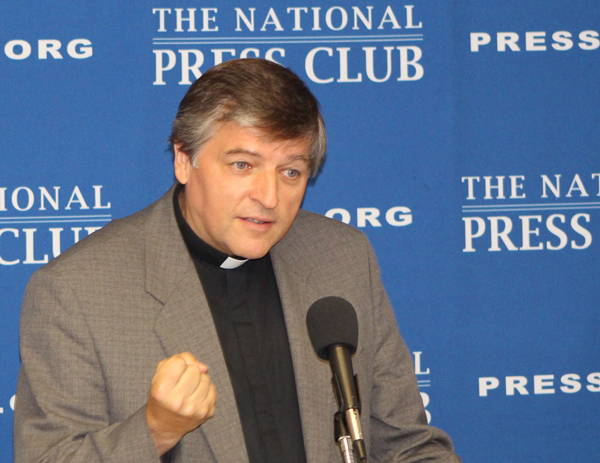 The Rev. Helmut Schuller is founder of the Austrian Priests’ Initiative, which is openly challenging the hierarchy on women’s ordination, same-sex marriage and the role of the laity. RNS photo by Kevin Eckstrom

WASHINGTON (RNS) An Austrian priest who’s been banned from speaking at Roman Catholic churches during his three-week U.S. tour said Pope Francis could be an ally in reforming the Catholic Church, but said it will take more than the pope to open the priesthood to married men and women.

The Rev. Helmut Schuller, founder of the Austrian Priests’ Initiative, has been drawing crowds of several hundred people with his call for greater participation from the church’s lay “citizens” and a married priesthood.

“We are trying to open the church to a real approach to modern society,” Schuller said Monday (July 22) in a speech at the National Press Club. “There are a lot of questions to our church in these times, and the answers are really old-fashioned.”

Schuller is the key organizer behind a group of about 430 Austrian priests who are openly challenging the hierarchy on allowing women priests, married priests, same-sex marriages and lay Catholics’ voice in the election of bishops.

His message has been warmly received by 10 progressive Catholics groups that are sponsoring his 15-city tour, but not from U.S. bishops. Boston Cardinal Sean O’Malley flatly forbade Schuller from speaking on church property; instead, a Unitarian church was packed with a crowd of more than 600 that spilled out onto the church lawn.

Schuller, 60, is a priest in good standing in the Archdiocese of Vienna, even though he was stripped of his title of monsignor and has what he called a “complex” relationship with Cardinal Christoph Schoenborn. He’s been told, because of his activities, not to expect a promotion.

Schuller’s group has issued a seven-point “Appeal to Disobedience” that, among other things, calls for allowing lay Catholics (including women) to preach and opening Communion to divorced and remarried Catholics. “Silent obedience” to the current rules, he said, is not an option.

Schuller also downplayed the idea of convening a Third Vatican Council to update the modernizing reforms of the Second Vatican Council from the 1960s. The current hierarchy is too conservative, he said, to usher in the change that’s needed.

“Church leaders, when they’re not accountable to the people of God, can do with the results of a council whatever they want,” he said.

Schuller said he’s optimistic that Pope Francis’ calls for a “poor church, for the poor” can tame the church’s sprawling bureaucracy and shift its priorities outward. He also takes heart that Francis seems to favor talking to his flock “on one level, eye to eye, face to face.”

“We are waiting, he has to have enough time,” Schuller said. “It’s not a job for two days, and it would not be enough for us to have a friendly face for the same old system.”

While he would love to have the ear of U.S. bishops on his American tour, he’s more concerned about reaching rank-and-file priests and laity, whom he calls the “citizens” of the church.

“To forbid the people from listening, I think, is the real scandal.”