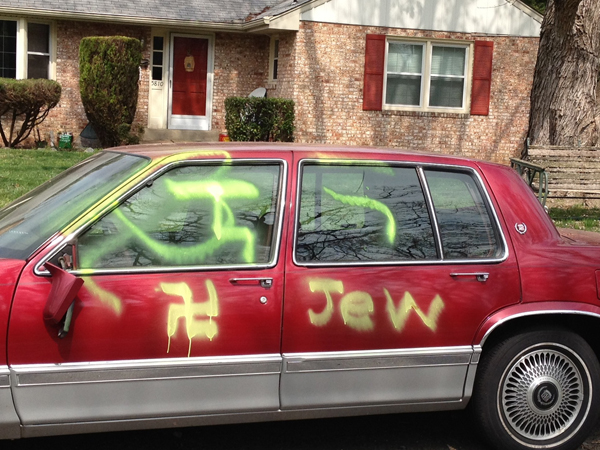 A neighbor reported that a car belonging to an owner two homes down was spray-painted with swastikas and "Jew" in bright yellow paint in Alexandria, Virginia in March 2012. Photo courtesy Anti-Defamation League
July 24, 2013
Lauren Markoe

(RNS) The Anti-Defamation League's study of anti-Semitism in the U.S. shows a 14 percent decrease in incidents during 2012, the second consecutive year of a downward trend. 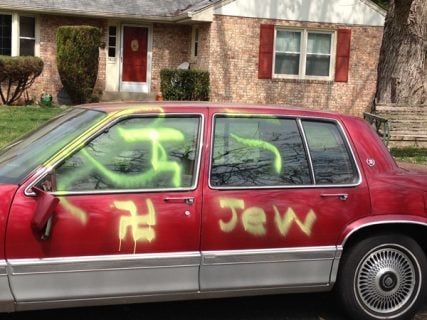 Neighbor reported that a car belonging to an owner two homes down was spray-painted with swastikas and "Jew" in bright yellow paint in Alexandria, Virginia in March 2012. Photo courtesy Anti-Defamation League

Overall, the ADL counted 927 anti-Semitic incidents -- including assaults, vandalism and harassment -- down from the 1,080 incidents reported in 2011. Abraham H. Foxman, the ADL’s national director, called the trend "encouraging."

“While these numbers only provide one snapshot of anti-Semitism in America, to the extent that they serve as a barometer the decline shows that we have made progress as a society in confronting anti-Jewish hatred," he said.

But the ADL report also showed a proliferation in the U.S. of some expressions of anti-Semitism, including vandalism, online expressions of hatred toward Jews, and anti-Jewish hostility on college campuses -- where the ADL says anti-Israel sentiment too often has turned anti-Semitic.

Vandalism rose 33 percent, with a total of 440 incidents reported in 2012. Most took place on public property or at individual homes, and Jewish institutions were targeted in 13 percent of the total cases.

Online expressions of anti-Semitism "are simply too numerous to track," according to the report, and are only counted "if they specifically target an individual."

“While we cannot point to any single explanation for the fluctuations from year to year, the declines of the past several years occur within the context of the continued proliferation of hatred online,” said Barry Curtiss-Lusher, ADL national chair.

“This explosion of viral hate is impossible to quantify, but it may have led to a migration of sorts where the haters and bigots are more likely to take to the Internet to express themselves anonymously, rather than acting out in a public setting,” he said, adding that the potential audience for online hatred numbers in the millions, and the danger is that it can fuel real-world violence.

"Some of those incidents included the use of anti-Semitic imagery under the guise of anti-Israel activism, with conspiracy theories about Jewish political and economic control being voiced on campus," according to the report.