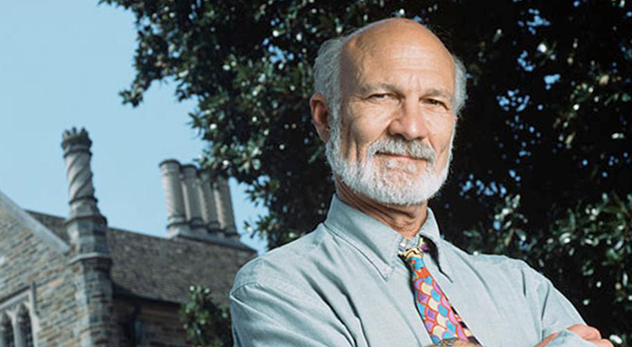 “America’s Best Theologian” talks about war, peace, and the church’s relationship to the state.

Named “America’s Best Theologian” by Time magazine in 2001, Stanley Hauerwas teaches at both Duke Divinity School and also Duke Law School. His book, A Community of Character: Toward a Constructive Christian Social Ethic, was selected as one of the 100 most important books on religion of the 20th century. He’s such a prominent thinker, the adjective “Hauerwasian” has been created to describe those who are influenced by his work.

More than an intellectual paragon, Stanley Hauerwas is a provocateur par excellence. He is always pushing people’s buttons, even once asking a medical researcher who defended experiments on fetal tissue, “What if it were discovered that fetal tissue were a delicacy? Could you eat it?” But he does this to provoke thought, not to pick fights. As a result, he’s become a prominent “Christian contrarian” and respected theologian. Here, he shares bluntly–would you expect any less?–his thoughts on war, pacifism and the church’s relationship with the state.

JM: Many Christians supported the war in Iraq. My home denomination, The Southern Baptist Convention, even did so publicly. This a problem in your view, isn’t it?

SH: Of course, the Christian support of war in Iraq is a problem. It’s more than a problem, it’s a sign of deep unfaithfulness.

JM: Many people attack pacifists with arguments about World War II, claiming that in some cases, war is justified and just. Do you disagree with this position? I mean, would the world have been better off if the Nazi regime had been allowed to pursue their agenda of aggression and genocide unchallenged?

SH: I always answer the challenge of WWII by asking people “Who fought in Hitler’s war?” The people who fought in Hitler’s war were Catholics and Protestants. All I’m trying to do is help Christian be able to recognize what they’ve been given in Christ, which is the ability to say “no” to the Hitlers of the world. Of course, the world would be better without the Nazi regime, but that’s not to say that the war was a good thing. Moreover, it wasn’t a just war as it was not fought on just war principles.

JM: You often point out that C.S. Lewis was a pacifist, or at least something like it. What was Lewis’s position and what do you believe modern Americans can glean from it?

SH: I do not think Lewis was a pacifist. I tried to suggest that through some of his literature he tried to imagine a way of life that could be described as “peace.” But he wasn’t a pacifist. Americans can learn a great deal from Lewis if they follow his imagination – not necessarily what he says explicitly.

JM: We’ve just finished celebrating the July 4th Independence Day. There were a lot of flags waving in and around American churches.  Is this show of patriotism problematic, in your opinion?

SH: I’ve long said that flags being used in churches on the 4th of July is a form of betrayal. It is so because the flag represents for many a more determinative sacrifice than the sacrifice of Christ.

JM: What is your greatest concern for the church today, in terms of its relationship with the state? Any cautions?

SH: My greatest concern for the church today in terms of its relation to the state is quite simply idolatry. As I’ve tried to argue in my book, War and the American Difference, the deep problem is the Christian identification with America such that Christians are unable to distinguish the church from America. It’s an understandable confusion given our country’s history. But that doesn’t make it any less perverted.