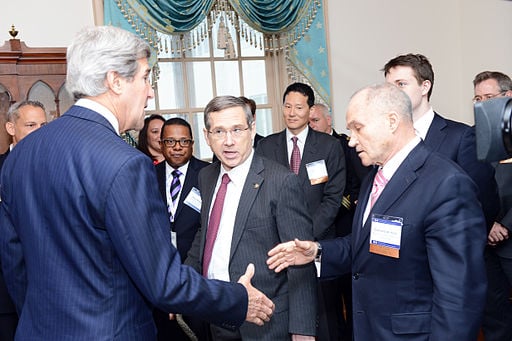 (RNS) Muslim-American groups are mounting a growing campaign to quash the potential nomination of New York City Police Commissioner Raymond Kelly as the next secretary of the Department of Homeland Security.

Muslims say that as head of the nation’s biggest police force, the commissioner oversaw a spying program that targeted Muslims based solely on their religion, showed poor judgment by participating in a virulently anti-Islamic film, and approved a report on terrorism that equated innocuous behavior such as quitting smoking with signs of radicalization.

Homeland Security chief Janet Napolitano announced she is resigning in September to become president of the University of California system.

“Mr. Kelly might be very happy where he is, but if he’s not, I’d want to know about it, because obviously he’d be very well qualified for the job,” President Obama said in a July 16 interview with Univision.

Muslims are particularly indignant because Obama said on numerous occasions that he would work to end profiling.

“Ray Kelly has a proven record of violating Americans’ basic civil rights,” said Glenn Katon, legal director of Muslim Advocates, a civil rights group based in San Francisco. “His willingness to use discriminatory policing methods against innocent citizens should concern Americans of every faith, ethnic and racial background.”

The very mention of Kelly’s name as possible head of the DHS has sparked concern among many Muslim groups, who in a sign of their growing organizational maturity have swiftly marshaled their energies to oppose Kelly before he is even nominated.

The Muslim American Civil Liberties Coalition sent a four-page letter to Obama on July 18 detailing why they would oppose a potential Kelly nomination.

“Commissioner Kelly’s legacy in New York is synonymous with divisive, harmful, and ineffective policing that promotes stereotypes and profiling,” the letter said. The coalition includes the Association of Muslim American Lawyers, the Muslim Bar Association of New York and the Muslim Consultative Network.

In addition, the American-Arab Anti-Discrimination Committee in Washington sent out an “action alert” to members urging them to email a form letter telling Obama to not nominate Kelly.

Perhaps of greatest concern to Muslims is a NYPD surveillance program, uncovered in 2011, in which police officers and paid informants watched and collected evidence on at least 250 mosques, 12 Islamic schools, 31 Muslim student and 256 "ethnic hotspots" such as cafes. The commanding officer of the NYPD’s Intelligence Division said in a 2012 report that the program did not yield any leads. 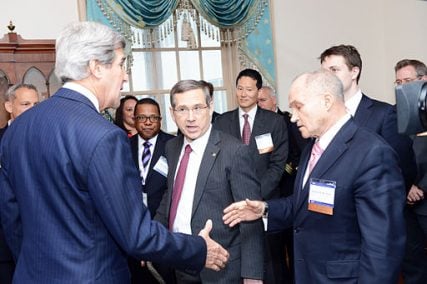 U.S. Secretary of State John Kerry shakes hands with Raymond Kelly (far right), commissioner of the New York City Police Department, at the U.S. Department of State in Washington on May 13, 2013.

Muslims are also upset Kelly agreed to be interviewed for “The Third Jihad,” a 2009 film that casts all Muslims as potential terrorists. “The Third Jihad” was shown to some 1,500 officers as a “training film.” Kelly and one of his deputies denied knowledge of the interview, but later confessed.

Muslims were also troubled by a 2007 NYPD report, “Radicalization in the West: The Homegrown Threat,” which critics said equated praying, fasting, growing a beard, and quitting smoking with radicalization.

“He has based his policing methods with ethnic communities, especially the American Muslim community, on faulty and bad reports,” said Hoda Elshishtawy of the Washington-based Muslim Public Affairs Council. “These programs and reports actually make citizens less safe because they are not based on fact.”

Kelly did not respond to a request for comment. He defended his record in a recent editorial in The Wall Street Journal. He dismissed the allegation that the NYPD spied on Muslim New Yorkers, calling it a “sensational charge belied by the facts.”

“Anyone who implies that it is unlawful for the police department to search online, visit public places or map neighborhoods has either not read, misunderstood or intentionally obfuscated the meaning of the (police guidelines),” Kelly wrote.

The commissioner has also come under fire for a controversial “stop-and-frisk program” that allows police officers to stop, question and frisk a person who appears suspicious. Critics say most people stopped have been African-American or Hispanic.

Other groups that have been critical of Kelly’s record include the New York Civil Liberties Union, the Center for Constitutional Rights, the National Latino Officers Association, and 100 Blacks in Law Enforcement.

During his 2008 campaign, Obama said he would ban profiling, while in 2011, the White House released a local communities plan that recommended building trust between law enforcement and communities.

“A Kelly appointment to any position in the administration would demonstrate President Obama’s tacit endorsement of Kelly’s embrace of racial and religious profiling and indicate a severe reversal of the administration’s earlier positions,” said Corey Saylor, a spokesman for the Council on American-Islamic Relations.