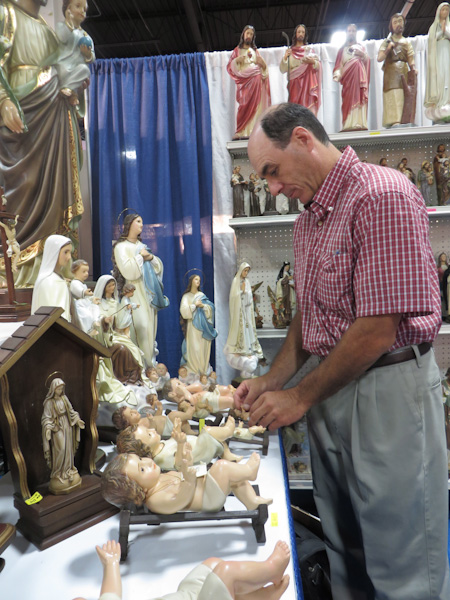 Click here to view a photo slideshow of the Catholic trade show.

SOMERSET, N.J. (RNS) Centuries ago, Roman Catholics helped kick-start the market for religious articles with their insatiable demand for rosaries, icons, prayer cards and all manner of devotional objects and spiritual souvenirs.

But in recent decades, evangelical Protestants have dominated the art of religious retailing, building a national network of bookstores and stamping the Christian message on almost any item that an American consumer might want, from perfume to golf balls to flip-flops.

Now, Catholic entrepreneurs are looking to catch up, and at the 17th annual Catholic Marketing Network trade show last week (Aug. 6-9) there was a sense that the Catholic sector has a new opportunity to expand -- if businesses can update their approach and broaden their inventory beyond the usual catalog of sacred objects.

“If you are a Catholic gift and bookstore and you are not willing to reinvent yourself, you are going to be out of business,” said Alan Napleton, president of the network, which organizes the convention.

“God doesn’t seem to suspend the laws of economics just because we’re Catholic,” he added with a laugh.

The potential for success is there, Napleton said, mainly because Catholics have been so far behind the retail curve that there is a large untapped customer base -- more than 60 million Catholics in the U.S. alone. Moreover, he said, a growing number of churches are willing to host bookstores, which helps business.

Also contributing to the sense of hope is the enormous enthusiasm generated across the Catholic world by the election of Pope Francis in March. “He’s a hard guy not to love,” said Napleton, “and that will drive people into the churches -- and the bookstores.”

Still, success will require hard work. Book, music and video sales remain the backbone of the Catholic retail business, but customers increasingly look for those items in many other venues, a phenomenon that is also proving to be a mortal threat to brick-and-mortar chains like Barnes & Noble. 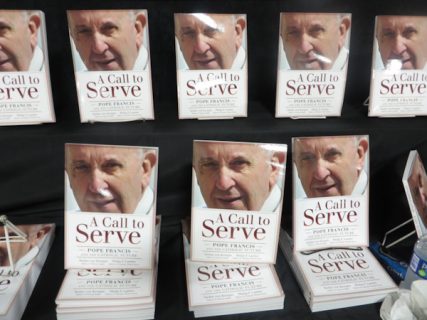 Books are at the heart of Catholic retailing, and ones like these about Pope Francis could boost sales in that sector at the 17th annual trade show of the Catholic Marketing Network last week (Aug. 6-9) in Somerset, N.J. RNS photo by David Gibson.

The challenges facing religious retailers are most evident in the multibillion-dollar evangelical marketplace, which dwarfs the Catholic market. In the 1990s, members of the CBA -- which started in 1950 as the Christian Booksellers Association -- rapidly expanded their network of stores just as the Internet started to shift retail’s center of gravity to the Web.

In addition, big-box retailers like Wal-Mart and Costco spotted the tremendous growth in the Christian market and started carrying traditional Christian titles and items, and at lower prices. Then the recession hit, delivering a blow from which the CBA is still struggling to recover.

At the International Christian Retail Show in June, for example, attendance was down to 3,700 from a high of 15,000 in 1999. While sales were reportedly up from previous years, a growing number of stores had closed.

Many small Catholic businesses, on the other hand, may have benefited from both a lower profile and lower overhead. The 100 or so distributors, retailers and publishers at this year's trade show seemed ready to exploit those advantages.

There was also a clear effort and willingness to move beyond viewing Catholic merchandise as purely devotional and instead to offer items that piggyback on the consumer culture in order to project the Catholic brand.

Hence the proliferation of Catholic-themed children’s games, license plate frames, coffee mugs, papal key chains and a host of other products that were higher on whimsy than tradition -- a bit of “Catholic kitsch,” perhaps, to answer the “Jesus junk” that some use to describe many CBA items.

“I think you can only sell so many statues and rosaries and books,” said Bruce Blake, who with his wife and son have produced Catholic car decals out of their Minneapolis home since 2006. “Vehicle Decals for Roamin’ Catholics” is the motto of their company, CatholiCar. 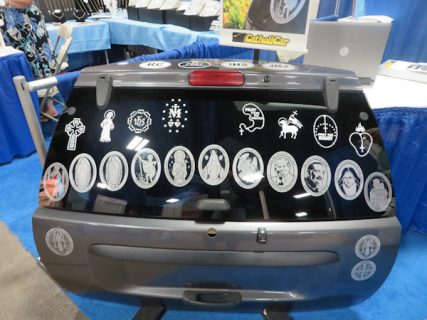 A selection of bumper decals from the "CatholiCar" company at the 17th annual trade show of the Catholic Marketing Network last week (Aug. 6-9) in Somerset, N.J. RNS photo by David Gibson.

Increasingly, Blake said, when retailers see their products, “they love them. It’s something new.”

Joe Klinker, who started a company called Tiny Saints, also represents the new Catholic marketer. A Coast Guard lieutenant, Klinker has an artistic side and when his daughter was stillborn in 2011 and he struggled to explain heaven to his other children, he started drawing saints that look like their toys.

A light went off, and the result was a series of clip-on charms and bracelets that Klinker and his brother began marketing out of his home in February. He expanded quickly from 20 characters to 54 -- including, of course, a Pope Francis figure, even though the pontiff isn’t a saint, at least not yet.

“The Internet opens up a whole world of possibilities,” said Klinker in between chats with potential distributors. “A knucklehead like myself, if I had this idea 15 years ago, I never would have made it happen. Now there’s no excuse not to capitalize on the gifts God gives us.”

While booksellers and icon suppliers dominated the floor space -- “A lot of people are still looking for traditional statues,” insisted Giovanni Pierinelli of the Santa Teresita Statuary Co. -- even familiar items came in new packaging.

There was a booth, for instance, for the Real Men Pray The Rosary ministry, which sells everyday products with bold graphics to promote the traditional Catholic devotion. “Rosaries aren’t just for old ladies and funerals,” said the ministry's Victoria Calvillo. “We use strong images and strong colors because there is strength behind it.”

Edward Leonard of the Tennessee-based distributor Spiritus echoed that approach. “We look at things that have a broad appeal for a wide range of customers,” Leonard said. Spiritus has been instrumental in developing Christian (and specifically Catholic) products from toy makers like Playmobil and Melissa & Doug, and the Spiritus booth had a Jesus action figure as well as a Vocation Doll. “Certain stores embrace it right away,” Leonard said of the new products. “Others have to see it to get the ‘wow’ factor.”

The folks at Nelson Fine Arts & Gifts get it. The Steubenville, Ohio-based company, though it has just 20 employees, is one of the largest Catholic gift suppliers in the country. While they specialized in classic framed art when they began in 1994, they are quick to spot a new opportunity -- which is what they saw with the election of Pope Francis in March.

“All we did for a week was cut and frame pope products. It was unreal,” said Mike Nelson as he stood next to a life-size cutout of Francis, one of a host of pope-inspired products they offer, in addition to a range of Catholic apparel and other tchotchkes.

“They’re really a lot of fun in a parish setting or for youth groups,” Nelson said of the cardboard pope. “People love to line up and take their picture with it.”