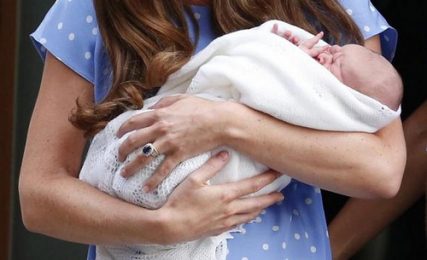 From the moment Prince William and Kate Middleton got engaged, a rumor ran happily through the Jewish blogosphere (and menacingly on many anti-Semitic websites): the couple's progeny, the heir to the British throne, would be Jewish! And then, on July 22, a son was born -- a Son of Israel!

His Royal Highness, Prince George Alexander Louis of Cambridge, is not Jewish -- and you can bet your yarmulke on that.

But because Jewish law considers a child Jewish if the mother is Jewish, and because Kate's mother's maiden name is Goldsmith -- a name not uncommon among British Jews -- some wrongly conclude that the wee prince's matrilineal line  is Jewish, and so is he must be too.

But before we dispel the rumor that the world's WASPiest baby is an Israelite, here are five reasons why some people assume he is.

1. The Iranians said so. The Tehran-based Mehr News reported that not only is Kate Jewish, but she was secretly baptized in the Church of England so she could marry William, and then they faked their whole Christian wedding. The story goes on: "Nevertheless even being baptized by the bishop of the church cannot prevent Prince William’s son, the next king and the senior governor of the Church of England, from being a Jew as Kate and William’s child will inevitably remain a Jew."

2. In a YouTube video that is circulating widely, dead ringers for William and Kate, their families and the Archbishop of Canterbury dance down the wedding aisle to klezmer music.

3. In 1937, Jewish philanthropist Frank Charles Lindo donated the wing at St. Mary's Hospital, where George and William were born.

4. The artist formerly known as Prince, according to at least one person, is half Jewish. So, if you're fully a prince ... maybe you're fully Jewish.

5. Former BBC reporter Michael Cole, who covered the royals beat, wrote a letter to the Times of London declaring that Kate is Jewish -- again, drawing on the surnames of her forbears. Even the New York Post decided this was meshugas.

She and her Anglican family were never big on going to church. She was baptized as an Anglican in 1982, when she was five months old, and then, before her wedding two years ago to William, who will as king one day assume the title "Defender of the Faith," she was confirmed by the Bishop of London. Many explained the confirmation as a measure to make it absolutely, positively clear that Kate is in no way Catholic (still frowned upon for royal spouses).

Genealogists have traced her lineage back generations, and all you can find is church wedding after baptism after church wedding.

Or, in the words of the widely-quoted Doreen Berger, the chairman of the Jewish Genealogy Society: “I’ve looked back as far as it’s possible to look back and she doesn’t have a Jewish link at all — it’s just not true. I’m 100 percent sure.”

September 3, 2020
Related Posts
By Jeffrey Salkin
The most Jewish thing that Ruth Bader Ginsburg ever did
By Yonat Shimron
Ruth Bader Ginsburg, who died Friday, was shaped by her minority faith
By Jeffrey Salkin
COVID has led us all into sin
By Alejandra Molina
600 faith leaders sign letter urging California governor to stop transfer of incarcerated people to ICE
By Yonat Shimron
Kamala Harris is more than her gender and race. She is also the future of American religion.