VATICAN CITY (RNS) Ahead of a major diplomatic push to try and prevent a U.S.-led attack on Syria, Pope Francis has named a veteran Vatican diplomat as his Secretary of State, the first major appointment of his six-month-old papacy. 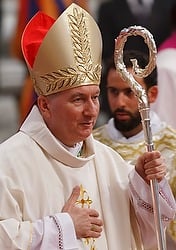 Parolin will replace Cardinal Tarcisio Bertone, a trusted aide of Pope Emeritus Benedict XVI whose lack of diplomatic training had been blamed for the mismanagement and scandals that plagued the Vatican in recent years.

Parolin, a 58-year old Italian, is a veteran of the Vatican’s diplomatic corps and will take office on Oct. 15.

He is currently the Holy See’s ambassador to Venezuela and served in the past as the Undersecretary for Relations with States, a role similar to deputy foreign minister.

“I feel the full weight of the responsibility placed upon me: this call entrusts to me a difficult and challenging mission,” he said in a statement after his appointment.

In his new role, Parolin will oversee the Roman Curia, the Catholic Church’s central administration, which was accused of corruption and inefficiency during the February conclave that led to Francis’ election.

Traditionally, the Secretary of State post had been given to Vatican diplomats, but Benedict chose to appoint canon law-trained Bertone, who had been working with him when he was the Vatican’s chief doctrinal watchdog.

Bertone has been accused of not doing enough to address the scandals and crisis that marred Benedict’s pontificate, from the sex abuse scandal to the rehabilitation of a Holocaust-denying traditionalist bishop up to the so-called Vatileaks scandal.

The role of Secretary of State not only entails managing the church’s central bureaucracy but also coordinating the Vatican’s relationship with states and with bishops around the world.

A senior diplomat with previous postings in Africa and Latin America, as the Vatican’s deputy foreign minister Parolin handled some of the Vatican’s most sensitive portfolios, such as negotiations with communist countries like China and Vietnam. In the latter case, diplomatic relations were eventually reestablished after more than 40 years.

Francis took his time in making his first major — and perhaps most important — appointment as some cardinals had signaled uneasiness at the pope’s slow pace in tackling Curia reform.

“(Cardinals) wanted someone with good managerial skills and leadership skills, and so far that hasn’t been as obvious. It’s a little bit of a surprise that he hasn’t played his hand on that front yet,” Cardinal Timothy Dolan of New York told National Catholic Reporter in late July.

Francis has charged a group of eight cardinals, including Boston’s Cardinal Sean O’Malley, to draw up plans for reform of the Curia. Their first meeting will be in early October.