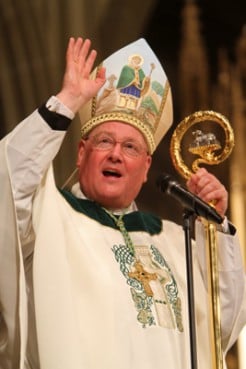 (RNS1-NOV16) New York Archbishop Timothy M. Dolan, president of the U.S. Conference of Catholic Bishops, shown here blessing the assembly at the end of a St. Patrick’s Day Mass at St. Patrick’s Cathedral in New York City, will be promoted to the College of Cardinals, the Vatican announced on Friday. RNS file photo by Gregory A. Shemitz.

Cardinal Timothy Dolan, archbishop of New York, president of the U.S. Conference of Catholic Bishops, and the most famous funny man in the American hierarchy, went on “The Colbert Report” last night to trade quips with another funny guy — and another well-known Catholic — host Stephen Colbert.

Indeed, as Colbert — inhabiting his onscreen persona as a blowhard rightwing pundit — said in welcoming Dolan: “You’re the second most famous Catholic in America – after myself.”

But it was actually Dolan who got the first gag, and giggles, as he walked onto the set and ostentatiously bowed and kissed Colbert’s hand as if he were greeting the pope.

“I’ve got to get a nice big ring if you’re going to be kissing my hand!” replied Colbert, who seemed — uncharacteristically —  unsure of how to play the exchange.

In fact, while Colbert was in full faux bloviating mode, he seemed to let Dolan set the pace of their chat; Colbert didn’t poke too hard on topics that could have prompted controversy.

Part of the relative deference may stem from the fact that Colbert is a serious Catholic who has taught Sunday school at his New Jersey parish. Or perhaps it was because Colbert knows Dolan personally, having appeared — out of character — at a forum on faith and humor last year at Fordham University. Or maybe Colbert was a bit out of practice: This was his first show after a two-week summer break, part of which he spent in Rome.

The Rome connection provided the source of most of the humorous banter, as the two talked about the conclave last March in which Dolan and 112 other cardinals elected Cardinal Jorge Mario Bergoglio as Pope Francis.

Francis has captivated the public’s attention with his unconventional simplicity and humble ways — and unsettled many who were used to popes issuing firm pronouncements on hot-button topics like gay rights.

Colbert played off that new dynamic, saying of Francis: “I don’t care for the guy.”

The problem? “He’s too soft. He’s too soft on sin, for me, this pope,” Colbert told the cardinal.

Case in point, he said, was Francis’ headline-making comment to reporters in July indicating he had no problem with priests who are gay. If the priests live good lives and seek God, “Who am I to judge?” Francis said.

“You are the pope to judge!” protested Colbert. “What is a declaration of sin or no sin except judgment?”

“But I’m a pundit,” Colbert retorted. “If I don’t judge someone I don’t get a check.”

Dolan was Colbert’s only guest on the show, and he ended the interview asking Dolan what would happen if Francis retired and Dolan were elected pope — what name would he take.

The cardinal-archbishop laughed, along with the audience, and after a long pause, said simply: “Stephen.”

It was well-timed, and Dolan got in the last laugh even as he got the first one.

Here are some other highlights from the conversation between Colbert and Dolan, followed by video of the “Colbert” episode:

On Dolan’s new ebook, “Praying in Rome: Reflections on the Conclave and Electing Pope Francis”:

Colbert: “So this blows the lid off the papal conclave.”

Colbert: “You did not get the gig … I was pretty mad because I had fifty bucks on it.”

Dolan: “He loves you, Stephen.”

Colbert: “Well, it’s unrequited at the moment. I’ll tell you why: here’s the thing: he’s too soft. He’s too soft on sin, for me, this pope. You heard what he said about atheists? He said even atheists are redeemed by Christ … If even atheists are redeemed by Christ, why have I been going to Mass every Sunday? I could have gotten another nine holes in! What do you think that means?

Colbert: “I don’t always know why I’m going to Mass. But I’m usually glad that I did.

As they went to the first commercial break, Dolan took a sip from the “Colbert Report” coffee mug:

Dolan: “This grappa is great — from Italy? You brought some back.”

Colbert: “It’s pure grappa. It’s jet fuel. Your’e going to be dancing on the table by the time we’re done.”

Colbert: “I was just over in Rome. Amazing. One thing I didn’t care for was St. Peter’s (Basilica). It was so crowded with people hoping to catch a glimpse of this new pope. Why do you think this guy is drawing crowds?”

Dolan: “Well, he’s down to earth, he’s simple, he’s sincere, what you see is what you get.”

Colbert: “But he’s not wearing the gold, he’s not in, like, the big golden throne. You know, when I put my buck in the collection plate on Sunday, that’s for production values. I want to see ‘Iron Man 3’ production values when I go.”

Dolan: “Well, whatever he is or is not wearing, it sure seems to be doing well popularity-wise. He’s marketing the message , he’s marketing in the best sense of the word. We say evangelization. But boy, he’s a pro at it, isn’t he?”

Colbert: “I tell you another thing I got a problem with — and I hate to make you answer for the guy you did or did not vote for — but he also said, he was asked about homosexuals, he said: ‘Who am I to judge?’ You are the pope to judge! But aren’t we supposed to? What is a declaration of sin or no sin except judgment?”

Colbert: “But I’m a pundit. If I don’t judge someone I don’t get a check.”

Dolan: Yeah, you’ve got ratings and all, I know, to take care of, and I hope I help.

On having a retired pope, Benedict XVI, and a sitting pope, Francis, at the same time:

Colbert: “You’ve got a spare pope, right? Pope Benedict made you a cardinal. Do you think Francis looks at you and goes, ‘You’re one of Benny’s boys.’ No, no, no, no, no! Back of the Popemobile for you!”

Dolan: “Well we all are! He hasn’t made any (cardinals) yet. I’d like to think he’d say, ‘He was part of the conclave that elected me’.”

On the chance of Pope Francis retiring and the conclave choosing a new pope:

Colbert: “I hope it’s someone I’m more simpatico with. If you were to be named pope, which name would you choose?”

Dolan, after a long pause: “Stephen.”