VATICAN CITY (RNS) A progressive theological current that emphasizes the Catholic Church’s closeness to the poor and the marginalized but was subject to decades of hostility and censure is now finding increasing favor in the Vatican under Pope Francis.

Archbishop Gerhard Ludwig Mueller, prefect of the Congregation for the Doctrine of the Faith, is pictured in a Jan. 11 photo in Rome. Photo by Paul Haring/courtesy Catholic News Service

Francis, who has called for “a poor church for the poor,” will meet in the next few days with the Rev. Gustavo Gutierrez, a Peruvian theologian and scholar who is considered the founder of liberation theology.

The meeting was announced on Sunday (Sept. 8) by Archbishop Gerhard Ludwig Mueller, prefect of the Congregation for the Doctrine of the Faith, the Vatican’s doctrinal watchdog, during the launch of a book he co-authored with Gutierrez.

It’s a remarkable about-face for a movement that swelled in popularity but was later stamped out by the conservative pontificates of John Paul II and his longtime doctrinal czar, Benedict XVI.

Liberation theology arose as a Catholic response to the Marxist movements that fought Latin America’s military dictatorships in the 1960s and ’70s. It criticized the church’s close relations, including often overt support, with the regimes.

It affirmed that, rather then just focusing on seeking salvation in the afterlife, Catholics should act in the here and now against unjust societies that breed poverty and need.

In his seminal 1971 book, Gutierrez argued that the church should have a “preferential option for the poor,” following the example of Jesus, who chose to live mostly with poor and marginalized people.

During the pontificate of the fiercely anti-communist John Paul II, some of liberation theology’s leading exponents, such as Jon Sobrino and Leonardo Boff, were accused of espousing Marxist ideas and were censured by the Vatican.

In the ’80s, the Vatican’s doctrinal office, then headed by Cardinal Joseph Ratzinger (who later became Benedict XVI) condemned liberation theology for its “serious ideological deviations.”

Yet, it was Benedict himself who appointed Mueller as his successor to the Congregation of the Doctrine of the Faith, despite the fact that he was a well-known admirer of Gutierrez.

The move signaled a thaw in the tension between liberation theology and the Vatican, spurred by the end of the Cold War and the demise of Communist regimes. Even Gutierrez himself — who was never condemned by the Vatican — attended penitential rites officiated by Benedict in recent years.

Now, with the election of Francis, the first pope from Latin America, liberation theology can no longer “remain in the shadows to which it has been relegated for some years, at least in Europe,” according to the Vatican’s semiofficial newspaper, L’Osservatore Romano.

Though never a supporter of liberation theology himself, the Argentine pontiff has condemned the exploitation of the poor and called on Catholics to reach out to them. 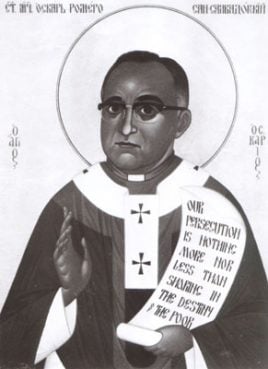 An icon shows the late Archbishop Oscar Romero of El Salvador, who was assassinated 25 years ago. RNS file photo

When Mueller originally wrote the book with Gutierrez in 2004, it didn’t attract much attention. Yet on Sept. 3, when its Italian translation was released, L’Osservatore Romano devoted a two-page spread to it.

In the book, Mueller describes liberation theology as one of the “most significant currents of Catholic theology of the 20th century” that helped the church bridge the divide between “earthly happiness and ultra-earthly salvation.”

During the book launch in Mantua, a city in northern Italy, Mueller also announced that the Vatican doctrinal office has given the green light to proceed with the sainthood of Archbishop Oscar Romero, a hero of Latin American Catholics who was assassinated in 1980 after condemning violence by the military dictatorship in El Salvador.