A cache of gold coins, jewelry and what is believed to be a Torah scroll decoration were discovered at the foot of the Temple Mount. Photo courtesy the Hebrew University

JERUSALEM (RNS) Calling it “a breathtaking, once-in-a-lifetime discovery,” an Israeli archaeologist announced the  discovery of a treasure trove of gold at the foot of the Temple Mount on Monday (Sept. 9).

The cache contains 36 shiny gold coins, some silver and gold jewelry and a 10 centimeter gold medallion with an etching of a traditional seven-branch menorah.

The collection, discovered beneath the floor of a Byzantine building about 160 feet from the southern wall of the Temple Mount — a site holy to Jews and Muslims — dates to the early seventh century.

The medallion, on a gold chain, may have been designed as an ornament for a Torah scroll.  The other items, including a smaller gold medallion, two pendants, a gold coil and a silver clasp, are believed to have been intended for use as Torah scroll ornaments, too. 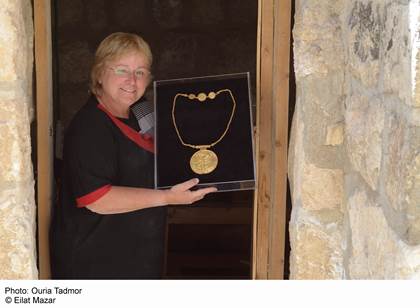 A cache of gold coins, jewelry and what is believed to be a Torah scroll decoration were discovered at the foot of the Temple Mount. Photo courtesy the Hebrew University

Archaeologist Eilat Mazar believes the items may have been abandoned when Persian conquerors allowed local Christians to expel the Jews from Jerusalem.  The Byzantine Empire, also known as the Eastern Roman Empire, ruled the Holy Land from Constantinople until Muslim armies conquered Jerusalem in 634.

“It would appear that the most likely explanation is that the cache was earmarked as a contribution toward the building of a new synagogue, at a location that is near the Temple Mount,” Mazar said. “The treasure was abandoned, and its owners could never return to collect it.”

Israeli Prime Minister Benjamin Netanyahu said the artifacts attest  “to the ancient Jewish presence and to the sanctity of the place.” 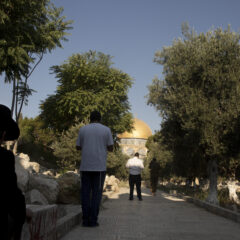