(RNS) — Retired Anglican Archbishop Desmond Tutu, who won the Nobel Peace Prize for his fight against apartheid in South Africa, continues to speak around the globe on justice and peace. Butler University and neighboring Christian Theological Seminary in Indianapolis announced Thursday (Sept. 12) that they would name a center for the 81-year-old icon. 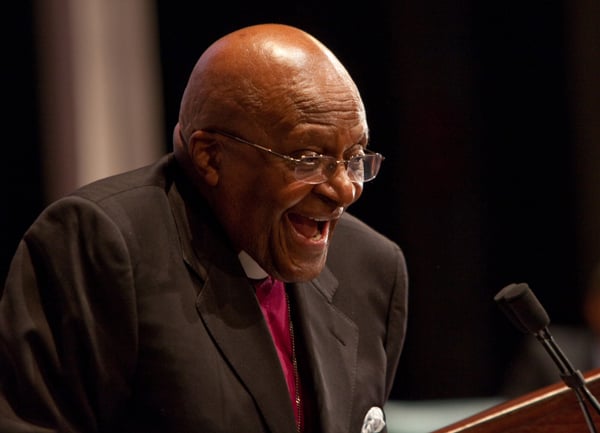 Just before the announcement of the new center, Tutu spoke with Religion News Service about faith and justice, Israel and Palestine and Pope Francis’ recent selfie and lifestyle choices. Some answers have been edited for length and clarity.

As well as can be expected for a decrepit old man. (He cackles.)

How do you feel about this center named after you?

I’m blushing. Naming a center after a person who is still alive can make it seem that an individual somehow on their own was able to accomplish what he accomplished. It was our people. I am thrilled and yet am so aware that any achievement has an aspect that we owe it to the people.

How has your faith influenced your work on justice?

We’re not in this struggle because we’re following a particular agenda. It’s precisely because we believe in the kind of God depicted in the Scriptures and in the life of our Lord and Savior Jesus Christ. It is quite exhilarating to speak about a God who has an incredible bias, a notorious bias in favor of the downtrodden. You look at Exodus and the Israelites’ escape from a bottomless pit. God is not evenhanded. God is biased up to his eyebrows.

What is the most pressing issue in which Christians need to relate their faith to power and injustice?

Anywhere where the humanity of people is undermined, anywhere where people are left in the dust, there we will find our cause. Sometimes you wish you could keep quiet. It’s the kind of thing you heard the prophet Jeremiah complain of where he says, “You know God, I didn’t want to be a prophet and you made me speak words of condemnation against a people I love deeply. Your word is like a fire burning in my breast.”

It isn’t that it’s questionable when you speak up for the right of people with different sexual orientation. People took some part of us and used it to discriminate against us. In our case, it was our ethnicity; it’s precisely the same thing for sexual orientation. People are killed because they’re gay. I don’t think, “What do I want to do today? I want to speak up on gay rights.” No. It’s God catching me by my neck. I wish I could keep quiet about the plight of the Palestinians. I can’t! The God who was there and showed that we should become free is the God described in the Scriptures as the same yesterday, today and forever.

Pope Francis recently said of those who are gay, “Who am I to judge?” What do you make of the pope so far?

He’s taken a selfie! (cackling) He’s a tremendous breath of fresh air. The things he has done in a short period of time: the fact that he does not live in a huge papal mansion and just dropped by in the dining room where ordinary people have meals. You think of his background, where he didn’t use limousines in South America, that he used public transport. I’ve got to say to you that I’m so, so thrilled that he is there at this crucial moment in the history of our world.

I say somewhat facetiously, “I’m so glad I’m not God.” Can you imagine being God and looking at Syria and saying: “These are my children. Look at what they’re doing to each other.” God looks at the Middle East, looks at Palestine. When you go to the Holy Land and see what’s being done to the Palestinians at checkpoints, for us, it’s the kind of thing we experienced in South Africa. Whether you want to say Israel practices apartheid is immaterial. They are doing things, given their history, you think, “Do you remember what happened to you?” Then they clobber you and say, “You are anti-Semitic.”

How do  you respond to your critics?

I regard Abraham as my ancestor. Some of the greatest inspiration I have got has come from what we call the Old Testament prophets and what Jews would say “our prophets.” I don’t often want to speak. I try to be a reasonable person and to be diplomatic, but you go to that place and you see the settlements, you see what has happened to the land that was owned by the Palestinians. I have often said to my Jewish friends: “Please just remember where you come from. Remember Yahweh, who said to the Israelites, ‘Treat the alien well with justice.’” Almost all of the passion that we have has come from the inspiration that we have got from the Jewish Scriptures.

With Syria dominating the international conversation, how should countries respond with justice?

I’m so thankful a significant majority of Americans are saying no to military intervention. We’ve got to find a solution that will in the end be one that makes Syria a better country, a better people. We can be human only together. A person is a person to other persons. We so desperately long for all of us to learn that we are meant for one another. We are meant for complementarity. The Syrians are members of our family.