(RNS) The 50 members of All Saints Episcopal Church in Hitchcock, Texas, are looking forward to December, when Mark Marmon will be ordained their priest.

One reason for the excitement? They won’t have to pay him.

A 57-year-old fly fishing guide, Marmon, whose wife is a lawyer, says he doesn’t want or need a church salary. He belongs to a growing breed of mainline Protestant clergy who serve congregations in exchange for little or no compensation.

“We’re the frontline,” Marmon said. “If it weren’t for us, these churches would just roll up and die.” Jeremiah Griffin (left) and Mark Marmon (right) in procession during Ordination on June 15. They are two of 13 people ordained to the diaconate at Christ Church Cathedral. Photo by Carol Barnwell, Episcopal Diocese of Texas.

The unpaid cleric model is gaining traction among Episcopalians. In the mid-1990s, for example, the Episcopal Diocese of Wyoming had few if any unpaid clergy serving its 49 congregations. Now, 20 priests in Wyoming – more than one-third – are unpaid.

Within a few years, the number of unpaid clergy is expected to reach 35, according to Lori Modesitt, ministry developer for the Wyoming diocese. All those unpaid clergy are fully ordained.

Modesitt sees unpaid ministry as “the future of the church” – and a bright future at that. It empowers laypeople to become priests even if they can’t leave other careers, she said. And it ensures that ministry never becomes just a job. 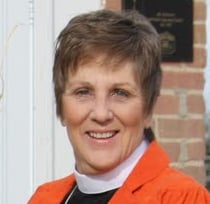 “What we’re talking about is going back to the original church, where people took an active part and used their God-given gifts for the betterment of the community,” Modesitt said. “This is a way to enliven congregations.”

The unpaid trend isn’t confined to remote ranchlands. In the Episcopal Diocese of Texas, which includes Houston, about 25 priests serve without pay after having gone through a $2,000-per-year, part-time training at the 9-year-old Iona School for Ministry.

Iona has attracted candidates for volunteer or nominally compensated priest positions from Northwest Texas, Oklahoma, Arkansas, Nebraska and beyond.

“We were never thinking that other dioceses would want to send students to our school,” says Mary MacGregor, executive director of the Iona School for Ministry. “That was not even on our radar.”

So great is the need for unpaid priests that a new distance education program launched by Iona in 2012 will train those who can’t get to Texas 10 times a year.

Participants in the Iona Initiative program keep their day jobs. They gather regularly in their home states with fellow students and mentors. They watch videotaped lectures from the Seminary of the Southwest in Austin. Currently piloted in Oklahoma, Wyoming and Hawaii, the three-year program will soon be available in eight dioceses where churches now wait for priests who won’t expect paychecks.

Most mainliners still pay their clergy. Only 2 percent are unpaid, according to Hartford Seminary’s 2010 Faith Communities Today survey. Meanwhile, 30 percent of mainline churches have a part-time, paid pastor. The rest have full-time, paid leaders.

But denominations expect more church leaders in years ahead to earn their livings in secular jobs. The Presbyterian Church (USA), for instance, encourages new seminarians to plan for nonchurch employment so they can serve fledgling congregations that can’t afford a full-time salary plus benefits.

Forgoing church pay can have benefits for priests. Marmon, who now serves as an ordained deacon at All Saints, finds that his parishioners appreciate how he serves the church with no expectation of monetary reward.

“They love me,” Marmon said. “They know my degree of dedication is 110 percent.”

But being unpaid has drawbacks, too. Modesitt served without a stipend in her rural Wheatland, Wyo., congregation for 10 years. Now her ministry there is part of her work for the diocese, but congregants still see her as one of them and consequently don’t always confide in her, she said.

“It’s hard for some of them to come to me with a personal issue that they might bring to someone who was paid,” Modesitt said. “I am to them still Lori, the person who sat in the pew” until her volunteering came to include the role of priest.

Marmon observes that some paid clergy “feel threatened” that Iona-trained priests who minister for free “are going to come in and take my job.” Such fears are overblown in his view because the unpaid serve a different niche.

Iona-trained volunteer priests work in a wide range of fields. Their ranks include a hospital administrator, a nurse, a judge, an ExxonMobil executive and an oil industry entrepreneur. Some are also retired, MacGregor said.

Traditional seminaries are adjusting to make sure students can handle the new realities. Auburn Theological Seminary in New York, for instance, is developing an entrepreneurial ministry track for students who plan to do ministry but aren’t counting on church employment after graduation.

“We’re encouraging a new form of ministry where students realize they may not go into congregations in traditional buildings that can pay them full-time salaries,” said Auburn President Katharine Henderson. “So they have to know how to do ministry in entirely new ways.”

Related Posts
By Alejandra Molina
‘Your fight is my fight’: Latino clergy and faith leaders rally behind Black Lives Matter
By Yonat Shimron
Americans to religious organizations: Stay out of politics
By Ryan Burge
Just like political parties, religious groups see their rivals as extremists
By Jeffrey Salkin
He's not a rabbi, and it's not Judaism
By Adelle M. Banks
Trump White House faith outreach a picture of selective access