SYRACUSE, N.Y. (RNS) The Rev. Steve Heiss presided at his first same-sex marriage ceremony in a field in upstate New York on July 7, 2002. At the time, gay marriage was not legal in New York, and it remains illegal in the United Methodist Church.

But his daughter was getting married, and he wanted to bless her relationship. As pastor of Tabernacle United Methodist Church in Binghamton, N.Y., he knew he was violating church law, but he saw no reason the women should not be treated as any other couple.

“Even then I knew it was worth the risk,” he said. “It was so right. You only have one opportunity to do this in your lifetime. I couldn’t imagine anyone would be so upset about it.”

In 2011, same-sex marriage became legal in New York state. Within a week, Heiss officiated at a same-sex marriage, and he has presided over six more since. Five of those weddings took place at his church.

In May, Heiss sent his bishop a letter disclosing his actions and his intention to continue officiating at same-sex marriages. On June 27, Heiss’ bishop, Mark J. Webb of the Upper New York Annual Conference of the United Methodist Church, sent him a registered letter informing him that a complaint had been filed against him.

On Friday (Sept. 20), Webb will decide whether to dismiss the complaint or forward the case to a church trial or an administrative hearing.

Heiss’ case comes as more United Methodists are challenging church policy. At least three other clergy face church complaints for presiding at same-sex marriages, and at least one pastor faces a complaint of being a practicing lesbian. All could potentially lose their clergy credentials.

The Rev. Thomas Ogletree, 79, retired dean at Drew Theological Seminary and Yale University Divinity School, who presided at the Oct. 12, 2012, wedding of his son and another man. Photo courtesy Yale Divinity School

Among those facing a complaint is the Rev. Thomas Ogletree, 79, retired dean at Drew Theological Seminary and Yale University Divinity School, who presided at the Oct. 12, 2012, wedding of his son and another man. Clergy filed a complaint against Ogletree after The New York Times published a marriage announcement. Ogletree has refused to promise never to preside again at a same-sex wedding.

The network includes 569 churches or communities that have written statements  welcoming all people, regardless of sexual orientation or gender identity.

“There are so many churches entering the process that we’ve had to add regional staff,” said Oliver, an ordained elder in Florida.

At least 1,500 clergy have signed a statement, publicly stating they are willing to officiate at same-sex marriages, Oliver said.

In addition, the Western Jurisdiction, stretching from Colorado to Hawaii, and from Alaska to Arizona, overwhelmingly passed a resolution in July 2012 that says the church “is in error on the subject.” The jurisdiction will operate as if the church teaching in the Book of Discipline on homosexuality did not exist. Several regional conferences, the smaller areas that make up jurisdictions, have passed similar resolutions in recent years.

“More and more clergy are being public,” Oliver said. “They frame it as they’re not being disobedient to church law, they are being obedient to the fullness of church law that says a lot more than the few paragraphs about LGBT issues.”

The issue is evolving in the same way that the church addressed other civil rights issues, said the Rev. Dean Snyder, senior minister at Foundry United Methodist Church in Washington, D.C. “We’ve been through this again and again,” he said.  “We did it over the issue of slavery. We experienced the same kind of thing around women being given the vote. The church was divided when it was segregated.” Heiss sees himself as typical of his generation, growing more open to gay rights as time goes on. A big turning point was learning that his brother and daughter are gay, as is a close friend. “If everyone had a gay relative or a gay friend this issue would disappear,” he said.

When he performed his daughter’s marriage back in 2002, he did it with a bit of stealth.

“I never really pronounced them married,” he said.

But these days he is feeling far more secure in his convictions. When his bishop suggested Heiss agree not to perform any more gay weddings, Heiss refused.

His bishop declined to comment, saying through a spokesman that it was a personnel matter. The Rev. Richard Barton, a district superintendent in the Upper New York Conference who filed the complaint, did not respond to a request for comment.

Heiss said he no longer wants actions to be secret, and he wants his denomination to change its policies.

“The long bitter era of scorn and hatred against gay people is dissolving before our very eyes,” he wrote to Webb.  “Christ has broken down the walls. … We are learning that it is really OK with God if one is gay.” 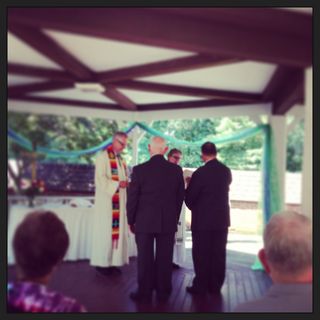 At its worldwide General Conference in May 2012, the  12 milion-member global denomination voted to keep the language in its Book of Discipline that calls homosexuality “incompatible with Christian teaching.”

The church does not ordain “avowed” homosexuals and bans clergy from officiating at same-sex marriages or holding such ceremonies in its churches. The church law cannot change until the next quadrennial conference, in 2016.

Should he lose his clergy credentials, Heiss would also lose his health insurance. But since his two daughters are grown and he’s divorced, it’s easier to take the risk than for younger clergy, he said. More important is the principle.

“I’m doing it because it’s so right,” he said. “After suffering the kind of bias these people have gone through, I have the privilege of standing there and saying, ‘You are married.’ It’s just knowing you are on the right side of history.”