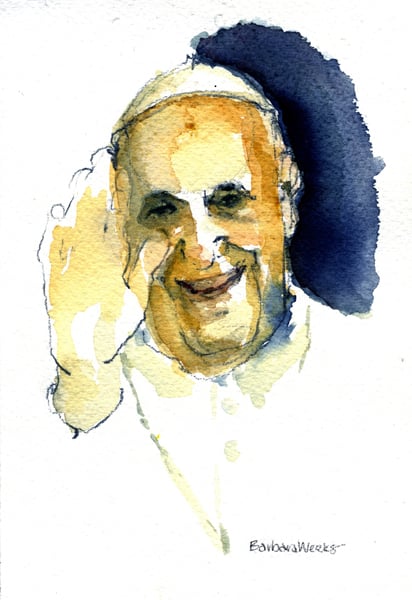 #38 - Pope Francis - Off the Cuff by Barbara Weeks, Chicago, Ill. (Watercolor) - "A watercolor of Pope Francis that expresses his spontaneity, directness and a papacy gradually filling out."
September 20, 2013
David Gibson 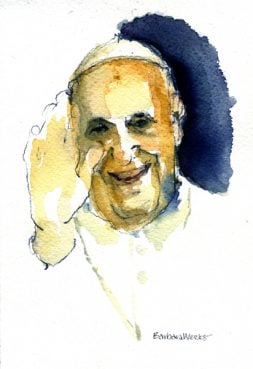 Pope Francis’ comments this week on everything from gays to abortion (less talk, more mercy), the hierarchy (be pastors, not bureaucrats) and religious faith (doubt is part of belief) continue to reverberate through the church and the media. RNS art by Barbara Weeks, Chicago, Ill. (Watercolor)

(RNS) Pope Francis’ comments this week on everything from gays to abortion (less talk, more mercy), the hierarchy (be pastors, not bureaucrats) and religious faith (doubt is part of belief) continue to reverberate through the church and the media.

Here are five broader insights that this wide-ranging interview revealed about Francis -- and why they will be keys to reading his pontificate, and perhaps the future of Catholicism.

1. He is not a hermit, and he reads his own press

The great danger for popes, like presidents and other world leaders, is that they can become isolated from the real lives of ordinary people beyond their gilded bubble. Some pledge to stay connected but ultimately fail, like John Paul II. Some enjoy the isolation, like Benedict XVI, which leads to losing touch.

Francis has done more than any pope to remain “normal,” as he puts it -- calling friends and strangers alike on his personal cellphone, and living in the Vatican guesthouse rather than the “inverted funnel” of the large rooms and small doorways inside the Apostolic Palace, as he said this week. “People can come only in dribs and drabs, and I cannot live without people," he said. "I need to live my life with others.”

He also knows what is going on in the church. He noted that he has been “reprimanded” by his right flank for not talking about their favorite issues all the time -- and he doesn’t care. Indeed, the whole interview was directed as much to his fellow bishops as to the wider church and world, and it revealed some serious political savvy behind the big smile.

“See everything; turn a blind eye to much; correct a little,” he said, reviving a favorite phrase of Pope John XXIII.

The point is that he sees everything, and seems determined to maintain his own listening posts.

2. He is a Jesuit forever

In a blog post that sought to downplay the significance of Francis’ interview, the Rev. John Zuhlsdorf, a conservative commentator popularly known as “Father Z,” wrote that Pope Francis is “formerly a Jesuit.” Yet nothing could be further from the truth.

Francis -- the former Cardinal Jorge Bergoglio -- was ordained a Jesuit priest as a young man, spent his entire adult life immersed in the teachings and dynamic of the order founded by St. Ignatius Loyola, and returns at almost every point in the 12,000-word interview to his Ignatian roots. He even gave the exclusive to a Jesuit journalist from a Jesuit magazine.

Reading the interview is like getting a primer on Ignatian spirituality, on an openness to the world and “finding God in all things.” But he boils it down to one word: “Discernment.”

“My choices, including those related to the day-to-day aspects of life, like the use of a modest car, are related to a spiritual discernment that responds to a need that arises from looking at things, at people and from reading the signs of the times. Discernment in the Lord guides me in my way of governing.”

As the Rev. Thomas Reese, a Jesuit and an analyst for National Catholic Reporter, put it: “While reading the interview, I felt like I was in a Jesuit living room having a conversation with a brother.” Francis is letting everyone else in on those conversations now; listen and you will get a better understanding of where this pontificate is headed.

When the cardinals gathered last March to elect a successor to Benedict XVI, many Catholics were praying for a reformer who would tilt the church toward the progressive side of the spectrum. The cardinals, and many other bishops, were mainly concerned with getting a pope who would get the Roman Curia off their backs and maybe even listen to their concerns once in a while.

Both prayers may have been answered, but the most significant development may be Francis’ vow to have a “real, not ceremonial consultation” in which he hears all points of view and where everyone can speak freely.

He expressed that most provocatively in highlighting that all Catholics -- rather than the pope alone -- “are infallible in matters of belief.”

Francis’ appreciation of consultation comes from reflecting on his past mistakes, when he vaulted to a senior leadership position in the Jesuits at the age of 36 and alienated many with his “authoritarian way of making decisions.” The church, too, has been guilty of that fault, he says, and he wants to change that.

4. “Pope Francis is comfortable with gray”

Religion, and especially Catholicism, is widely associated with certitude and doctrinal pronouncements that draw rigid lines designed to show who’s in and who’s out, who’s right and who’s wrong.

This pope has a different view.

“Pope Francis is comfortable with gray,” writes the Rev. James Martin, a Jesuit at America magazine, which published the papal exclusive. Francis says those frightened “disciplinarians” who desire “an exaggerated doctrinal security” are missing the Christian message.

Indeed, Francis says: “If a person says that he met God with total certainty and is not touched by a margin of uncertainty, then this is not good. … If one has the answers to all the questions -- that is the proof that God is not with him. It means that he is a false prophet using religion for himself.”

The point is to have a church that is a big, messy, welcoming family, “not a small chapel that can hold only a small group of selected people. We must not reduce the bosom of the universal church to a nest protecting our mediocrity.”

All of these points add up to the biggest takeaway, namely …

“There are ecclesiastical rules and precepts that were once effective, but now they have lost value or meaning. The view of the church’s teaching as a monolith to defend without nuance or different understandings is wrong,” Francis says.

Instead, he continues, the church “must better understand how human beings understand themselves today, in order to develop and deepen the Church’s teaching” and to “grow in the understanding of the truth” and “mature in her own judgment.”

In his comments, the pope seems to echo the 19th-century English convert, Cardinal John Henry Newman, who has been both celebrated and condemned for his writings on how doctrine evolves over time. It was Newman who famously said: “To live is to change, and to be perfect is to have changed often.”

It is unclear how long any changes might take under Francis, or exactly what form they will take. But after this week’s developments, it seems inevitable that change is coming, and Francis won’t be deterred by naysayers.