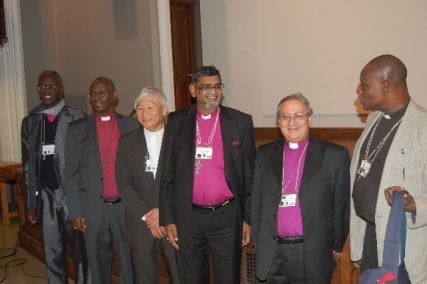 Among others, (center) Archbishop Ian Ernest, of the province of the Indian Ocean, with (second from right) Archbishop Mouneer Anis, of Egypt, and (far right) Bishop Josiah Iduwo-Fearon of Nigeria, at the conclusion of the Anglican Back to the Future Conference in Toronto on Wednesday (Sept. 18). RNS photo by Bob Bettson

TORONTO (RNS) Primates and bishops from the Global South attending a gathering here said current proposals for a new Anglican Communion covenant don’t go far enough to heal the conflict in the communion over homosexuality.

The Wednesday (Sept. 18) gathering to mark the 50th anniversary of the Toronto Anglican Congress, suggested the worldwide Anglican Communion faces troubled waters. Anglicans from the Global South prepare to meet for their second Global Anglican Future Conference next month and the Toronto meeting showed no signs of reconciliation.

Archbishop Ian Ernest, primate of the province of the Indian Ocean, said decisions by the Episcopal Church in the United States and the Anglican Church of Canada on issues involving homosexuality have torn the fabric of communion.

“These are sad events,” he said. “Things will never be the same again.”

Another primate, Archbishop Mouneer Anis of Egypt, launched a harsh critique of the communion leadership’s unwillingness to deal with issues. Successive archbishops of Canterbury have tried to hold the communion together, but failed to use their influence to bring cohesion to autonomous provinces, he said.

Anis said the recommendations of primates meetings have not been carried out. The Lambeth Conference in 2008 was characterized by what he called “divide and rule” tactics, with no decisions being made.

The Anglican Consultative Council, which facilitates the cooperative work of the churches in the Anglican Communion, is not representative of the communion, Anis said, because its members are drawn primarily from what he called “non-orthodox” voices, rather than the majority orthodox voices held by African and Asian churches.

While the Anglican Congress in Toronto put forth a manifesto calling for the communion to grow in “mutual responsibility and interdependence in the body of Christ,” Anis said recent developments in the communion have delayed work on the proposed covenant, and “watered down” its content. 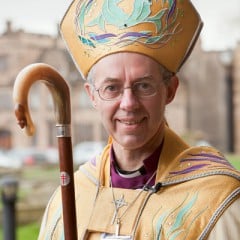 The Right Rev. Justin Welby, bishop of Durham, was named the 105th Archbishop of Canterbury.

The vision the Egyptian archbishop put forward was a more conciliar communion, with more power for the regular primates meeting, more representation for the Anglican Consultative Council and a clear mechanism for dealing with what is acceptable diversity from the provinces of the communion.

There were few voices among the speakers to question this analysis of the state of the communion. But organizers arranged a video linkup with the new archbishop of Canterbury, Justin Welby.

In a brief address, Welby said that in every generation, church members have thought their problems were “terminal.”

“Churches are sinful,” said Welby. “None of us are right. The trouble with the Anglican Communion will not be solved by focusing on one or two sins. All of us need to come to the cross.”

He said in different contexts the problems may be different — sexuality, persecution, corruption, abuse of power, complacency, poverty.

Welby said Anglicans are called to be bridge builders, who will “find ourselves struggling with unity.” He sees the future growth of the communion in mission and in reconciliation. 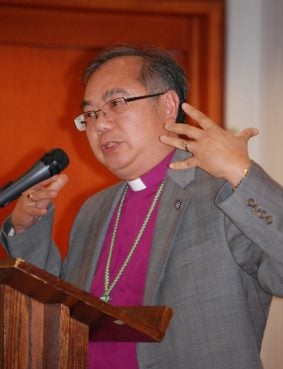 Bishop Yu speaks at the Anglican Back to the Future Conference in Toronto, Canada, on Wednesday (Sept. 18). Photo by Bob Bettson

The conference concluded with a reminder that even among more conservative Anglicans there is concern about the polarization in the church. Toronto Suffragan Bishop Patrick Yu, said he was concerned about the lack of theological and geographic diversity among the speakers to the conference.

“We are always lumped with the Americans,” he said. In the Diocese of Toronto people are not “judged or driven out” on the basis of being traditional in their theology. “We do not persecute conservatives.”

Yu said in spite of differences in the communion, there is hope for reconciliation and a new commitment of resources to mission and evangelism. “Our problems are not so intractable,” he said.

(Bob Bettson is a former religion writer for the Calgary Herald, and now a freelance journalist and Anglican priest. ) 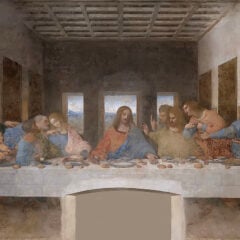