(RNS) Catholic military chaplains cannot be forced to witness or bless a same-sex marriage, nor are they allowed to take part in any marriage counseling retreats that are open to gay couples under new rules issued by the Archdiocese for the Military Services.

The rules, sent to chaplains on Sept. 18 by Archbishop Timothy P. Broglio, head of the AMS, also bar chaplains from taking part in a funeral for a Catholic if that participation “would give the impression that the church approves of same sex ‘marital’ relationships.”

But the new rules also set out conditions that would allow Catholic military commanders to comply, without violating their beliefs, with rules giving same-sex couples under their command federal employee benefits as required by law. 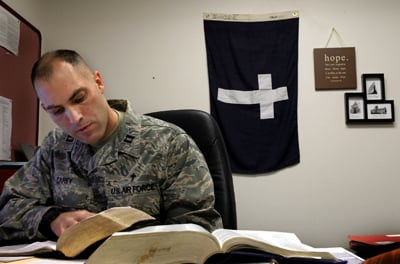 Broglio cited an interpretation from the National Catholic Bioethics Center explaining that Catholic commanders can morally facilitate benefits for gay couples in their command if there was no other way to avoid it without jeopardizing their career.

“This is also contingent on the commander making known his/her objection to being required to … participate, as well as on attempting through legal channels to continue to accomplish changes in policy consistent with the historic understanding of marriage and family as based on natural moral law,” said the statement from the bioethics center.

Broglio promulgated the rules in response to the military’s repeal of the Don’t Ask/ Don’t Tell policy for service personnel and the Supreme Court’s decision this summer to strike down a key component of the federal Defense of Marriage Act.

The new policies were expected and follow similar guidelines issued last month by the Southern Baptist Convention for its chaplains.

But they came out just a day before the release of a groundbreaking interview in which Pope Francis said the church was “obsessed” with issues like gay rights and called for a “new balance” in its public witness.

There are 234 priests serving as active duty chaplains in the Army, Air Force and Navy for about 275,000 Catholic military personnel. About 25 percent of all personnel in the armed forces are Catholic, and eight percent of military chaplains are Catholic. Southern Baptists have nearly 1,500 endorsed chaplains serving in the U.S. military, more than any other denomination or faith group.

In his statement, Broglio said the new federal policy on gay marriage and gay rights for military personnel “makes it necessary to reiterate with clarity the teaching of the Catholic Church regarding homosexuality.”

He said that same-sex couples account for less than half of one percent of couples in the armed forces and “such a small group cannot be allowed to mandate policy for all.”

“A clear disservice is rendered if the truth of the Gospel is confused by the actions of those ordained to disseminate that truth,” the archbishop said, adding that chaplains should also “never forget that it is the sin that is hated and never the sinner.”

The new rules also reiterate that “anyone who is known to be in a sinful relationship is excluded from ministries” such as serving as a lector, catechist, altar server or from giving out Communion.

Last year, Congress approved conscience protections for military members that allow them to express their personal beliefs without fear of punishment.