Faculty and candidates for Graduation assemble in the Bruening-Marotta Library of Saint Mary Seminary in Wickliffe, Ohio on May 8, 2013. Photo by Renata M. Courey / courtesy Saint Mary Seminary and Graduate School of Theology and Diocese of Cleveland

WASHINGTON (RNS) After decades of glum trends — fewer priests, fewer parishes — the Catholic Church in the United States has a new statistic to cheer: More men are now enrolled in graduate level seminaries, the main pipeline to the priesthood, than in nearly two decades.

This year’s tally of 3,694 graduate theology students represents a 16 percent increase since 1995 and a 10 percent jump since 2005, according to Georgetown University’s Center for Applied Research in the Apostolate (CARA).

Seminary directors cite more encouragement from bishops and parishes, the draw of Pope Emeritus Benedict XVI and the social-justice-minded Pope Francis, and a growing sense that the church is past the corrosive impact of the sexual abuse crisis that exploded in 2002.

Ultimately, it was “a calling in my heart,” says Kevin Fox.

He walked away from his electrical engineering degree and a job in his field, working with CT scanners, to enter St. Mary Seminary in Wickliffe, Ohio, in his home diocese, Cleveland, this fall.

“I always had an inkling that I might want to be a priest and my parish priest told me he thought I might be called,” said Fox, 24. “But I put it aside.”

With a fresh degree from Case Western Reserve and his first post-graduation job, Fox soon realized the secular path “wasn’t filling my soul with joy.”

Now, after years of pure science, Fox is immersed in pure theology – and loving it. The challenges of the culture, such as crude jokes from strangers about the abuse crisis, have not dissuaded him.

“I feel the church has done a great deal to deal with (preventing) abuse and the seminary took a lot of care in screening and training us to make sure we are the good guys,” Fox said. 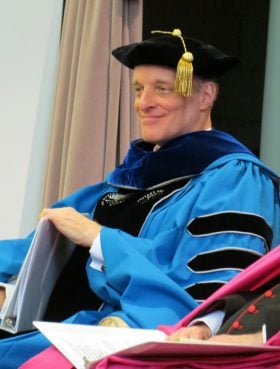 Fox is one of 72 students currently enrolled in the undergraduate and graduate programs at St. Mary, the highest number in decades, said the Rev. Mark Latcovich, president and rector.

Latcovich credits encouraging current seminarians and priests who are “our best recruiters. If they are happy and witnessing their faith and opening their hearts, that enthusiasm and joy is contagious.”

Young men today “want to give their life for something that counts. These men are tired of living in a culture of relativism. They want to say there must be something true, beautiful and good. They have discovered the beauty of God,” said Latcovich.

He also cited “a renewal of idealism,” a stronger push for vocations by priests and bishops, and “receding damage” from the abuse crisis.

Cox, who sat in on admission discussions, says his students are drawn from Southern California to Las Vegas and range in age from 22 to 45. While they’re younger than previous classes, they bring “a great level of maturity” to get through a rigorous admissions process.

“Ultimately, I believe that the Spirit is at work,” Cox said.

CARA’s new statistical look at the church shows the seminary-to-priesthood patterns and other shifts in American Catholic life:

“Catholics don’t live where they lived 15 years ago. They’ve moved south and west, from urban to suburban areas and they didn’t take their parishes with them,” Gautier said. “The smaller, older lay-led places without a resident priest are often the first to be closed.”

Meanwhile, the declining numbers of people who identify with Protestant denominations has led to falling numbers in their seminaries since 2006, said Eliza Brown, spokeswoman for Association of Theological Schools, which represents more than 270 seminaries.

Between 2006 and 2012, the number of students enrolled in Master of Divinity programs at Protestant and non-denominational Christian seminaries fell from 31,532 to 29,249, Brown said.

“Their congregations are less able to afford for full-time, theologically educated clergy,” she said. “And students, who graduate with debts, can’t afford to take part-time or low-paying pulpit positions.”