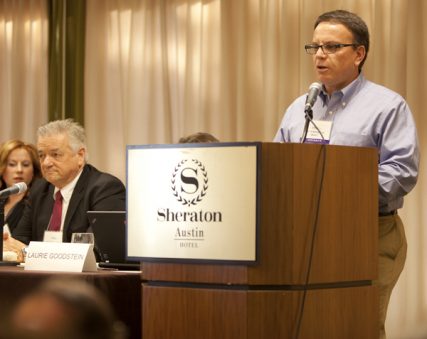 While comparing evangelicals to Catholics on abuse response, “I think we are worse,” he said at the Religion Newswriters Association conference, saying too many evangelicals had “sacrificed the souls” of young victims.

“Protestants can be very arrogant when pointing to Catholics,”  said Tchividjian, a grandson of evangelist Billy Graham and executive director of Godly Response to Abuse in the Christian Environment (GRACE), which has investigated sex abuse allegations.

Earlier this summer, GRACE spearheaded an online petition decrying the “silence” and “inattention” of evangelical leaders to sexual abuse in their churches.

Mission agencies, “where abuse is most prevalent,” often don’t report abuse because they fear being barred from working in foreign countries, he said. Abusers will get sent home and might join another agency. Of known data from abuse cases, 25 percent are repeat cases, he said.

Still, he says, he sees some positive movements among some Protestants. Bob Jones University has hired GRACE to investigate abuse allegations, a move that encourages Tchividjian, a former Florida prosecutor. “That’s like the mothership of fundamentalism,” he said. His grandfather split with Bob Jones in a fundamentalist and evangelical division.

“The Protestant culture is defined by independence,” Tchividjian said. Evangelicals often frown upon transparency and accountability, he said, as many Protestants rely on Scripture more than religious leaders, compared to Catholics.

Abusers discourage whistle-blowing by condemning gossip to try to keep people from reporting abuse, he said. Victims are also told to protect the reputation of Jesus.

Too many Protestant institutions have sacrificed souls in order to protect their institutions, he said. “We’ve got the Gospels backwards,” he said.

Tchividjian said he is speaking with Pepperdine University, a Church of Christ-affiliated school in California, about creating a national GRACE center.