Severely damaged during the 1915 massacre and deportation of local Christians, it stood roofless and abandoned for decades, a poignant reminder of the void left by the killing of its congregants. 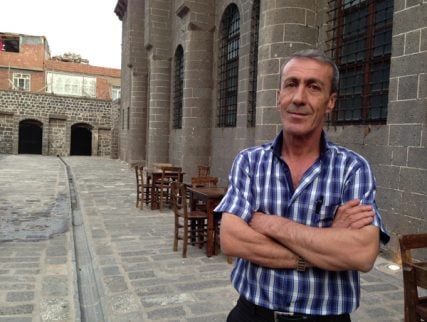 Yet for several months now the tolling of bells can once again be heard emanating from the belfry and echoing through the city’s narrow alleyways and busy markets.

St. Giragos recently underwent an extensive $3 million dollar restoration that included a new roof, the reconstruction of all seven of its original altars — a unique feature for a church, which usually has just one — and the return of an iron bell to its belfry.

“Right now the bells are just symbolic,” said Arahim Demirciyen, an ethnic Armenian who rings the bells twice a day. “A priest is currently in training in the Armenian quarter in Jerusalem. When he finishes and arrives here we can also start holding regular weekly services.”

The reopening of what church officials say is the largest Armenian place of worship in southeastern Turkey is part of a re-evaluation by Kurdish Muslims of the active role their ancestors played in the killings of minorities including Armenians, Assyrians, Greeks and Jews in the twilight years of the Ottoman Empire.

Last April, the Peace and Democracy Party, which seeks more freedom for Kurds in the southeastern part of the country, acknowledged the atrocities carried out in the area 98 years ago and called on the Turkish government to recognize the killings of Armenians as an act of genocide.

Its declaration flew in the face of Turkey’s longtime insistence that the mass killings during and immediately after World War I were not premeditated but part of a civil war that pitted the region’s peoples against each other in a desperate struggle for power.

Abdullah Demirbas, the Kurdish mayor of Diyarbakir, has presided over several initiatives aimed at commemorating his city’s once numerous Christians. Under his leadership, the municipality paid for 15 percent of the renovation of St. Giragos, unveiled a monument in memory of the 1915 victims at a local park and plans to open an Armenian museum.

Such acknowledgment comes as a breath of fresh air for the few dozen Armenians in Diyarbakir — a city where they were once a majority.

Over a glass of mint tea taken in the shade of St. Giragos’ courtyard, Demirciyen, the bell ringer, draws a line across his throat when describing the ordeal of his Armenian father.

In 1915 at the age of five, Demirciyen’s father was taken in by Muslims after his own family perished in the violence. Demirciyen identifies as an Armenian Muslim. And he feels an obligation to share his father’s survival story with the daily trickle of mostly Western tourists who come to see St. Giragos.

Ergun Ayik, who heads the foundation that funded most of the renovation of St. Giragos, estimates there are thousands of people of Armenian descent like Demirciyen in and around Diyarbakir.

While the opening of the church in Diyarbakir is good news for preservationists and supporters of minority rights, it does not indicate a nationwide phenomenon. In other parts of Turkey, the country’s Christian legacy is still under attack. In Trabzon, a city on the coast of the Black Sea, a Byzantine church has recently been converted into a mosque.

Even in Kurdish majority parts of Turkey like Diyarbakir, where official attitudes have changed drastically, resentment of Christians lingers.

When Switzerland banned building minarets in 2009 an irate group of Kurdish Muslims showed up at Diyarbakir’s Virgin Mary Assyrian church — perhaps the oldest in the city — and demanded its bells be removed.

“They said if Muslims couldn’t built minarets in Switzerland then we could not ring our bells here — like we were to blame,” recalled Yousef, the son of the church’s priest, Yusuf Akbulut, standing in the center of the church’s rotunda.

Police intervened and the bells continued to ring, yet it did little to make the last three Assyrian families in the city feel welcome. The last baptism took place two years ago.

“If we leave,” said Yousef, who asked that his full name not be used, “our churches will fall into disrepair and some might even be converted to mosques.”