“The vandal was obviously upset and trying to shut me down, to silence me, to shame me for the book I wrote. Art is a tool for creating new understandings and expressions of ourselves, which is also what religion is for. Any vandalism against art is dangerous and leads to stagnant views of ourselves and our place in the world.”

In this case Stillman’s home was vandalized, but often it’s the art that gets censored or destroyed amid calls of blasphemy.

Monday marked the Center for Inquiry’s fifth annual International Blasphemy Rights Day. Let’s take a look at 12 artists and their works that have been stifled or damaged for exploring themes or depictions some critics consider blasphemous. If you’re likely to be offended, you might want to stop reading here…or you can jump on down to the comments section and sound off.

In 1987 New York artist Andres Serrano photographed a plastic crucifix allegedly submerged in his own urine. He claimed it was a comment on the commercialization and misappropriation of religion. In 2011, amid a surge of Christian fundamentalism in France, Catholic activists stormed a gallery in Avignon and slashed the photo.

Art doesn’t need to be critically acclaimed to provoke outrage. The poorly produced “Innocence of Muslims” video featuring offensive depictions of Islam and the Prophet Muhammad  prompted protests around the world and demands by more than 20 governments that Google remove or block it. Pakistan still hasn’t lifted a ban it implemented on YouTube during the controversy. 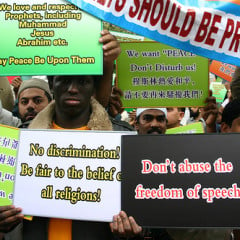 Protests against the Prophet Muhammad cartoons published in Jyllands-Posten and republished in newspapers around the world.

Before “Innocence of Muslims” there was the Danish cartoons controversy. In 2005 Danish newspaper Jyllands-Posten published 12 illustrations of the Prophet Muhammad to spark debate around self-censorship and Islam. Outrage at the caricatures fueled violent riots in majority-Muslim countries. In 2009 scholar Jytte Klausen published “The Cartoons that Shook the World.” Much to the author’s dismay, Yale University Press removed reproductions of the actual cartoons from the book before publication, citing foreign policy, national security and safety concerns.

It should come as no surprise that the deliberately offensive animated series “South Park” made this list. In 2010 Comedy Central heavily censored an episode depicting Prophet Muhammad in a bear suit amid threats of violence directed at the show’s creators.”South Park” supporters ran an “Everybody Draw Mohammed” competition in response. Please don’t confuse this with our recent (and much less controversial) “Draw the Pope” competition.

In 2010 a crowbar-wielding Christian woman destroyed a lithograph titled “The Misadventures of the Romantic Cannibals.” Critics of the piece saw a buxom Jesus receiving oral sex from a man. The artist Enrique Chagoya said the piece was meant to “critique corruption of the sacred by religious institutions” and to comment on the Catholic clergy sex abuse scandal. The attacker, who was charged with criminal mischief, allegedly screamed, “How can you desecrate my Lord?” before tearing the print at a Colorado art museum. 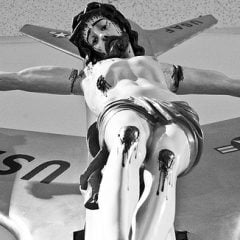 A Leon Ferrari piece with Jesus on a war plane

The Argentine artist Leon Ferrari was perhaps best known for his seemingly blasphemous works. The Virgin Mary in a blender? Check. Saints in a frying pan? He did that too. Jorge Mario Bergoglio, a man we now know as Pope Francis, demanded that a 2004 retrospective in Buenos Aires featuring Ferrari’s work be closed immediately, saying it represented a “blasphemous affront.” A judge agreed, but not before a group of Christians could destroy several works. A different judge later overturned the decision to close the exhibit, citing the importance of free expression in his ruling.

7. Ants on a crucifix

In 2010 the National Portrait Gallery in Washington, D.C. removed a video that showed ants crawling on a crucifix after the Catholic League and several House Republicans criticized it as a form of hate speech offensive to Christians. The video, titled “A Fire in My Belly,” was produced by artist David Wojnarowicz who said the sequence was meant to depict the suffering of someone with AIDS.

One year after the ant crucifix debacle, the Cultural Centre of the Philippines in Manila hosted an exhibition to specifically showcase blasphemous art. A poster advertising the show featured a phallic unicorn Jesus (go ahead and Google that one on your own). The country’s president Benigno Aquino III voiced opposition to the exhibit, and a local church group threatened legal action on blasphemy grounds. Amid threats and vandalism, the Cultural Centre shut it down. Here’s a clip showing some local reactions to the exhibit:

Nepali artist Manish Harijan received death threats last year when his mashup paintings of Hindu gods and western superheroes went on display at a gallery in Kathmandu. The gallery curators called in police backup, but rather than sending in guards, they locked the gallery’s doors. Harijan said that this series, called “The Rise of the Collateral,” represented western influence on eastern religions. That explanation didn’t appease the World Hindu Federation activists who considered it blasphemous.

One of India’s most celebrated modern artists, Maqbool Fida Husain, died in exile in the U.K. in 2011. He fled his homeland at the age of 90 amid lawsuits and death threats from Hindu extremists who protested and attacked exhibitions featuring his depictions of nude Hindu goddesses.

Contemporary art features a lot of “mixed media,” but rarely does this term include elephant dung. That’s a central component of Chris Ofili’s “The Holy Virgin Mary,” a painting that also includes collaged vaginas. In 1999 then mayor of New York City Rudy Giuliani tried to withdraw funding from the Brooklyn Museum when the painting was featured in one of its exhibitions. This led to a First Amendment case that the museum eventually won, but not before one man threw manure at the museum (reactive performance art?) and another smeared white paint over Ofili’s canvas, calling the work blasphemous. 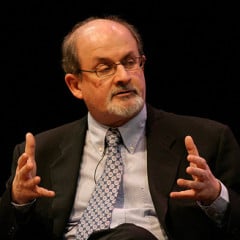 Most novelists don’t make it to four books. Most fourth novels don’t ignite global outrage and inspire assassination attempts. Salman Rushdie accomplished both with “The Satanic Verses,” his 1988 novel partly inspired by the Prophet Muhammad. The “blasphemous” book was banned in India, burned in the U.K. and led Iran’s Ayatollah Khomeini to issue a fatwa calling for Rushdie’s death. Threats of violence surrounding the controversy still plague Rushdie. In 2012 he pulled out of a speaking gig at the Jaipur literature festival amid renewed calls for his assassination.

These are 12 of the countless examples I could have listed. Go ahead and add more “blasphemous” art that has been suppressed or destroyed in the comments section below.

And while you’re down there, why not chime in on an old debate? Should believers (or nonbelievers) ever have the right not to be offended?