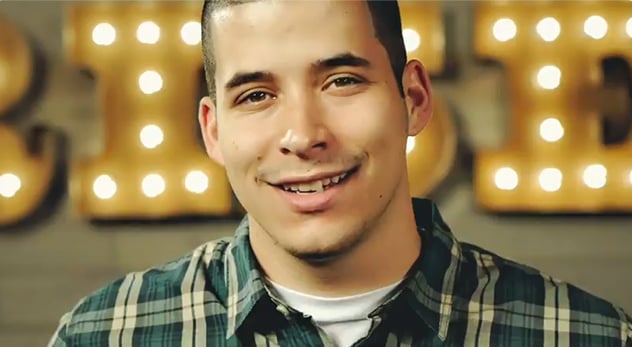 Yes, he’s from Tacoma, Washington. Yes, he played baseball in college. Yes, he loves Frosted Flakes. But, if you’re like over 25 million other YouTube viewers, you probably know Jefferson Bethke from his viral video, “Why I Hate Religion, But Love Jesus.” Bethke’s new book, Jesus > Religion: Why He is So Much Better Than Trying Harder, Doing More and Being Good Enough explores some of the themes from the 2012 sensation. Here, we talk about religion, his critics, and why he still thinks Jesus hates religion.

JM: Jeff, your spoken word YouTube video has had over 25 million views.  Why do you think it resonated with so many?

JB: That’s a great question. I still am not entirely sure. But if I had to speculate I think it resonated because I think there’s this constantly growing chasm in the 21st century western evangelicalism and this vibrant, beautiful, revolutionary, new creation oriented world Jesus launched at the resurrection you see more predominantly in the scriptures. Even though it seems like a caricature, reading YouTube comments on many religious oriented videos, would show that many people’s Christianity doesn’t go much farther than “don’t get tattoos, don’t drink beer, and never swear or curse.” I think my generation has constantly felt this almost awkward vibe when reading the New Testament and then looking up into the landscape of modern evangelicalism and saying, “really? This is the same thing?”

JM: Not every Youtube sensation can or should write a book like you have. Can you say something about the thinkers who have influenced you and why people should listen to what you have to say?

JB: Amen to that first sentence! And to be honest I thought that same thing about myself at first. But when I dug around in my own heart, passions, and desires, I realized the reason I did poetry in the first place was because I love to teach. In school, I studied politics and government and my plan was to be a lawyer, and then that evolved into becoming a high school social studies teacher. So I love to teach and think analytically (I’m left handed, which makes me a little corky as well). I think poetry is an outflow of that, rather than my main passion. In fact, I don’t know how much longer I’ll do spoken word, as I don’t think it’s necessarily my gift or passion. Writing seems more up my alley.

Some of the thinkers who’ve shaped my faith pretty significantly have been Tim Keller, Dietrich Bonhoeffer, NT Wright, A.W. Tozer, Charles Spurgeon, C.S. Lewis, Ann Voskamp, Francine Rivers, Watchman Nee, Francis Schaeffer, Beth Moore, and Andrew Murray. I really owe each of them for particular seasons of life, struggles, joys and events. Their writings have all given me a unique perspective about Jesus and His message that I hadn’t seen before and that had a profound impact on this book.

JM: How do you see today’s 20-somethings taking a new approach to faith? Has there been a cultural shift among this demographic in your opinion?

JB: Well, I think if you study church history you definitely see each generation having to figure it out on their own. It seems to be the way God has weaved mystery into depths of Christian faith. It’s every generation’s job to figure out what it means to follow Jesus in that particular context and culture. If you simply adopt your parent’s methodology and don’t wrestle it out yourself, it almost self destructs. So yes, I’d definitely say there is a shift.

There’s issues our parents raved about that we might not seem to be making much of a big deal of, and then there are some things that might have not been championed by our parents that we are taking a keen interest in. When I look out at the landscape of my peers, I see a lot of desire for authenticity. I think because of systemic injustices like fatherlessness being more prevalent in our generation than ever before, we’re keenly aware of fakery and deceit. We can tell if someone is authentic or the real deal pretty quickly.

Also, with the wide spread nature of technology, news, and the internet, it’s impossible for my generation to turn a blind eye to the suffering of the world (both in our back yards and abroad). It’s too much in our face to not care, which is why you see the idea of justice and setting the world to right, and joining God in his redemptive mission, as another key component of the 20-somethings faith.

The one thing that does scare me though is our complacency about community. I see a lot of 20-somethings, myself included, who are okay with living in isolation. We substitute Facebook, Twitter, and email for real face-to-face interaction. We forget the importance of sharing meals together, which has been a deep sacred rhythm in the Christian faith since the beginning, and serving one another. So I pray that we’d come to grips with the depth and need for community. For life on life existences. For reflecting the image of God when we gather as the people of God—loving, serving, giving to one another. That’s a thing our parents did well. We need to realize that our faith is built on their shoulders, and we need to learn from them.

JM: Can you say something about how faith-messages are communicated today?  How has rise of social media impacted conversations about faith?

JB: Technology is a double-edged sword. I think social media, and YouTube specifically, has really forced the Church to cultivate and reclaim it’s creativity. We have the Creator as our Dad, so we should have the uttermost creativity. Social media has a very harsh “weeding out” aspect. If it’s dry and unengaging, then no one will listen or engage with it. But the other side is that we continually are reducing the size of our messages to fit shrinking attention spans. I know for me, social media is great but I also have to just completely shut down sometimes because it prevents me from doing simple things like quieting down, reading, studying the scriptures and journaling for more than 30 seconds. Social media has transformed the Bible from a beautiful narrative, written over thousands of years, by different authors, ranging from poetry to historical narrative, to 140 characters or less.

JB: One thing I’d say first is what they are not. Moralistic man-made religion is not the same as discipline, church attendence, rhythms, and routine. There’s this weird sphere, especially among my age group, where if something requires grace-driven discipline then someone cries “legalism.” That’s simply not true. I mean Hebrews goes as far to say that Jesus learned obedience through suffering. But, signs of true man-made religion would be pride, power grabbing (usually through violence—physically or of the heart), and making yourself the center of the story rather than Jesus. Jesus didn’t seem to get so upset with the Pharisees over their basic theology or Torah interpretation. But he got pretty upset over them for how they applied it or added to it–the reflection they were giving of who God is and what God is like.

JM: Some criticized your video saying it was theologically inaccurate and filled with false dichotomies. How do you respond?

JB: The initial craze and critique of the video taught me so many things. I’m so thankful for it and how much it taught me, shaped me, and made me think about things I wouldn’t otherwise consider. And if I can be honest, when I read most of the critiques, I couldn’t help but say, “Amen!” I think technology has completely flattened any sense of geographical or regional contextualization. The word “religion” might mean something different to someone in Seattle than it does someone in Nashville. Or Bangkok for that matter. So for me, when someone comes up to me and says they hate religion, I want to first know what they mean by “religion.” That pretty much gives away their trajectory.

In my context, there is a good group of people that use the word to describe moral behaviors that place you in right standing with God. And if that’s the case, well that seems pretty upside-down of what Jesus came to preach. His gospel is about Him doing something we couldn’t. But, all-in-all my critics taught me that language is multi-faceted, it can mean different things to different people, and before I critique someone I first like to ask, “What do you mean by that?” before I start pushing further.