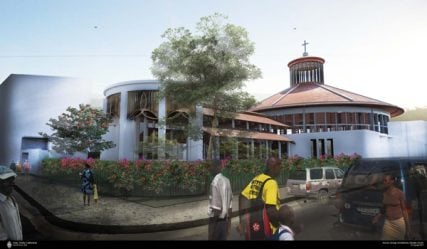 A proposed sketch of a rebuilt Holy Trinity Cathedral in Haiti. Photo courtesy The Espiscopal Church

(RNS) A landmark cathedral that was reduced to rubble in the 2010 earthquake will be resurrected in Port-au-Prince, Haiti.

Designs to rebuild the Holy Trinity (Episcopal) Cathedral were unveiled Tuesday to the Episcopal Church Executive Council during its Chicago meeting.

It will be twice the size of the destroyed cathedral and will incorporate the bronze bells and three world-famous murals depicting biblical stories with Haitian characters that were salvaged from the ruins of the original church.

The new cathedral is designed to meet international earthquake and hurricane resistant standards and will generate its own electricity and provide its own purified water.

In Christchurch, New Zealand, a landmark Anglican cathedral that was toppled by a massive earthquake a year after the Haiti earthquake is being rebuilt, largely with cardboard tubes.

“The resurrection of Holy Trinity Cathedral offers hope to Episcopalians as well as a nation,” said Presiding Bishop Katharine Jefferts Schori, whose mostly U.S. flock includes the large Diocese of Haiti. “The former cathedral was a spiritual center for the Haitian people, celebrating the creative spirit of God in a nation born in liberation from slavery.”

Like the old cathedral, the new Holy Trinity Cathedral will serve as both a place of worship and a center for the performing arts.

The new design is a collaborative effort among the Diocese of Haiti, the Episcopal Church, the Kerns Group Architects of Arlington, Va., and Studio Drum Architects of Port-au-Prince, Haiti. 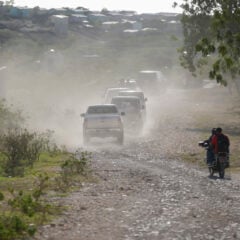 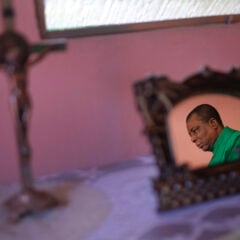 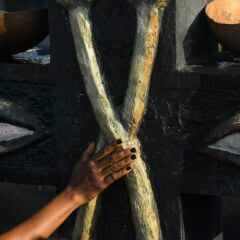 Religion Hub
Haitian revelers honor the dead in Vodou festival
Follow us on Facebook!
Submit your photos to RNS