Max Blumenthal, an award-winning journalist, was initially approached by The New York Times to produce a video on Israel.

Here was his submission, “Israel’s New Racism: The Persecution of African Migrants in the Holy Land”, which dealt with the theme of rising racism against African immigrants in Israel.   The  NYT rejected his video.   The Nation published it instead.:

Blumenthal carefully documents the vicious racism against the 60,000 African immigrants and refugees in Israel.  The majority of these immigrants are from Sudan and Eretria.   Many of these refugees are fleeing war-torn countries and seeking the economic opportunities in Israel. Blumenthal’s documentary portrays groups of racist ultra-nationalist Israelis who have turned into vigilantes, and talk about bypassing the rule of law and “rounding up the infiltrators.”

One of these racist speakers addresses a mob gathering by stating: 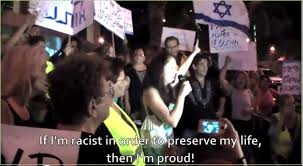 “Outside my house I see shit, spit, and psychopaths just waiting for the chance to murder me. You can see it in their eyes.”

It is not only a matter of racist vigilante groups.    Elected members of the Knesset, such as Eli Yishai, are recorded promising that if they are able to consolidate their power, “not a single infiltrator will remain in Israel.” 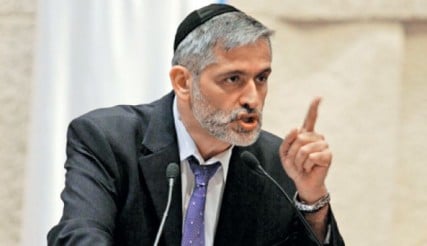 Eli Yishai is familiar to readers of this blog.  We have already seen Eli Yishai, The Interior Minister of Israel, declare:

“Most of the people arriving here are Muslims who think the country doesn’t belong to us, the white man.”

The full extent of the racial context of Yishai’s statement is connected to his characterization of Israel as a country of the “white man.”   Yishai’s quote was reported in the most popular Israeli newspaper, Haaretz.  For what it is worth, the majority of the African refugees are actually Christian.

The New York Times rejected Blumenthal’s video, and instead ran this video which highlights the hipster culture of Jaffa neighborhood in Tel Aviv.

Here is the hard-hitting commentary that the NY Times wished to highlight:

Omri Aviv. Hipster. “I really love the Jaffa area because it’s funky with a true Israeli look. … funky and authentic.”

Ofir Siman-Tov, on wearing women’s clothes in Jaffa: “This neighborhood is relaxed, chilling, and there’s freedom in the street.”

Tmima Svitelman: “There’s certainly an eclectic style here that I like very much, and I hope they preserve it.”

But let us go back to Blumenthal’s video.

Ironically, the greatest moment of clarity may be one spoken by one of the primary racist organizers of anti-African rallies, Michael Ben-Ari. In the interview, Ben-Ari acknowledges that there is a tension between the Jewish and the democratic identities of Israel.  Israel’s democratic failures are of course most apparent in its ongoing occupation of Palestinians and the poor treatment of Arab Israelis, among other features.   It should come as no surprise that the same Ben-Ari also leads mobs into Arab neighborhoods inside Israel to intimidate them.   Among the people who appear in these anti-African rallies is Danny Danon, the Deputy Minister of Defense.   To put things in perspective, this would be akin to Paul Wolfowitz leading an anti-Hispanic rally during the Bush administration.

Nor should it be assumed that the treatment is purely because the immigrants are African and not Jewish.   Many discriminatory practices have also been directed towards African Jews, the most egregious of them being giving birth control to Ethiopian Jewish women without their knowledge or consent.

The treatment of Palestinians and African refugees is surely a serious challenge to the rosy depiction of Israel as a robust democracy.  To go back to Ben-Ari’s dual categories of democratic and Jewish, the treatment of African immigrants also reflects a profound perversion of Jewish ethics.   Indeed, many of the bravest critics of Israel’s racist policies are themselves proud Jews—some secular, some religiously motivated.

As I had previously reported, fortunately there are other voices within Israel, which tap into a far more generous—and dare I say, authentic—reading of Judaism:  Orit Marom, advocacy coordinator at the Tel Aviv-based Aid Organization for Refugees and Asylum-Seekers (ASSAF): “

“Yishai wants to show at any price that he put a few black people on the plane and call it a deportation. He doesn’t care that it will cost the lives of children. This is the opposite of Judaism. As a Jewish person, I can tell you that this is not to be Jewish, not at all, it’s just the opposite of the main values of Judaism.”

Marom’s justice-based view of the “main values of Judaism” is indeed rooted in the Bible:   Dozens of Biblical teachings command care, compassion, justice, and love for immigrants and aliens–alongside care and justice and love for the poor, the orphans, the needy, and widows.  In short, connecting God’s love with love for the most downtrodden amongst us.  Here isa sampling of some of these Biblical teachings:

who executes justice for the orphan and the widow, and who loves the strangers, providing them food and clothing.  [Deuteronomy 10:18]

Indeed the Bible connects the treatment of other strangers to the Hebrews’ own experience as strangers:

You shall also love the stranger, for you were strangers in the land of Egypt.  Deuteronomy 10:19

Other passages in the Bible remind the people of Israel of the need to not oppress immigrants:

You shall not wrong or oppress a resident alien, for you were aliens in the land of Egypt.  [Exodus 22:21]

A prophetic reading of the treatment of African immigrants to Israel would suggest that unjust and oppressive treatment of the Africans will result in God’s judgment.

The Lord watches over the strangers; he upholds the orphan and the widow, but the way of the wicked he brings to ruin.  [Psalm 146:9]

It is as if there is a struggle between two views of Judaism:  one kind, generous, and hospitable; the other racist, nationalist, mean-spirited, and exclusivist.  What is at stake is simultaneously the fate of 60,000 African immigrants, the vitality of Israel as a functioning democracy, and the way in which the just and hospitable teachings of Judaism are upheld, or perverted.

In the next blog posts, we will look at treatment of immigrants in United States and Iran.