(RNS) A coalition of 125 religious, civil rights, and community-based organizations sent a letter to the U.S. Department of Justice Thursday (Oct. 24) urging a civil rights investigation into a New York City Police Department program that spies on Muslims. 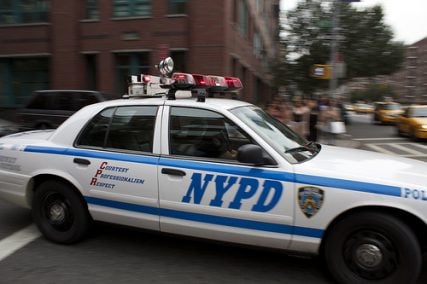 An NYPD car drives through the streets of New York City.

Groups from several faith traditions signed the letter including the Presbyterian Church (USA), the National Council of Jewish Women, the Hindu American Foundation, and the Sikh Coalition. Civil rights groups include the Leadership Conference on Civil and Human Rights, the NAACP, the American Civil Liberties Union, South Asian Americans Leading Together, and the National Network for Arab American Communities.

The NYPD program is already the target of two federal lawsuits, one filed in June by the ACLU and the City University of New York Law School’s Center for Law Enforcement Accountability and Responsibility, and the other filed in June 2012, by several Muslim plaintiffs represented by Muslim Advocates and the law firm Bhalla and Cho.

“Putting a class of Americans under surveillance based on their religion is a clear violation of our Constitution’s guarantees of equality and religious freedom,” Hina Shamsi, director of the ACLU National Security Project, said in a statement. “The NYPD’s surveillance program has stigmatized Muslims as suspect and had deeply negative effects on their free speech, association, and religious practice.”

The NYPD’s program of Muslim surveillance was uncovered in news reports in 2011. The reports said NYPD officers and informants have routinely monitored mosques, student associations, restaurants, bookstores, and other businesses, and created records of people because they were Muslims.

The NYPD has denied that the surveillance program constitutes illegal spying, and asserts it is permissible under law.