Ambassador-at-Large for International Religious Freedom Suzan Johnson Cook participates in a Facebook chat at the U.S. Department of State in Washington, D.C., on May 20, 2013.

WASHINGTON (RNS) Suzan Johnson Cook, who resigned this month as U.S. ambassador-at-large for international religious freedom, said she left for one central reason: She wants to earn more money in the private sector so she can give her sons the gift of a “debt-free college education.”

Johnson Cook served almost 30 months, and was the first African-American, woman, and pastor to hold the job. Though many praise her, she also leaves amid criticism that she failed to stand up for some of the world’s most persecuted victims of religious oppression.

Others question how much power the ambassador for religious freedom actually wields.

In an interview, Johnson Cook said that she left to safeguard her sons’ futures. One, 18, is a freshman at Princeton University, the other, 21, a senior at Johns Hopkins University who plans to be an orthopedic surgeon.

“The reality is, for them to be able to pursue their dreams, I can’t do it on a government salary,” she said.

Dividing her time between homes in Washington and Long Island, N.Y., she said she is looking to sit on corporate boards, join the speaking circuit, consult for nongovernmental organizations and relaunch her own speaker’s bureau, Charisma Speakers.

But the Baptist preacher — who founded a church and led several others in New York, and became the first woman to lead the influential Hampton University Ministers’ Conference of black clergy — believes she’s done preaching. Publicized as “Dr. Sujay” and “America’s chaplain,” Johnson Cook ministered to the victims of 9/11 as a New York City police chaplain.

“I did 32 years, three decades, in inner city New York City,” said the Bronx native. “Never say never, but I believe that season is complete.” 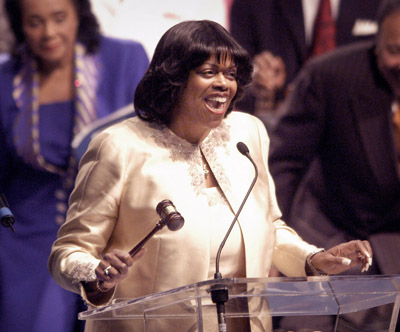 She said she would now work to protect civil rights and religious rights in a “global parish.”

Johnson Cook visited 27 countries as ambassador, and was the third person to hold the post since Congress created it in 1998 as part of the International Religious Freedom Act.

“Once you have gone to nations, and you’ve been in the diplomatic world,” said Johnson Cook, “I don’t know if you can necessarily go back.”

Nina Shea, an international human rights lawyer with the Hudson Institute, said Johnson Cook could have done more with the job.

The ambassador “is supposed to be an early warning signal before massacres break out, and I think she missed some of the biggest crises of our day,” said Shea, referring to the mid-August massacre of Coptic Christians in Egypt, violence against Rohingya Muslims in Myanmar (formerly known as Burma) and attacks on Nigerian Muslims and Christians by the militant group Boko Haram.

It is “shocking” that Johnson Cook “would be utterly silent and not speak about the largest, single persecution of the largest single religious minority in the Near East in 1,300 years,” said Shea, referring to suffering of the Copts.

Johnson Cook countered that she did act, but said her post allowed her to do so only as an adviser to the secretary of state and president. She said she met often with the Coptic Christian community, worked with other diplomats on Nigeria and supported U.S. efforts to “press the Burmese government on religious freedom.”

“As for particulars and details,” she continued, “they couldn’t be openly discussed because of security clearance issues, and it wasn’t my job to cross those lines.”

“The ambassador drew on her broad religious leadership experience to help guide the State Department to engage constructively these developments, and was an indispensable factor in the State Department’s vigorous efforts to address these threats to human rights,” he said. 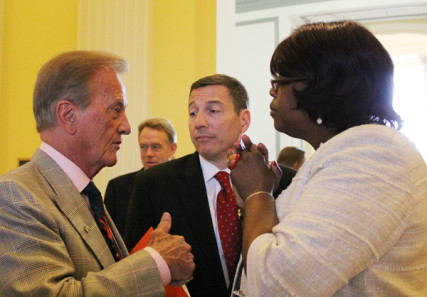 Thomas Farr, professor of religion and international affairs at Georgetown University, said the State Department restricted Johnson Cook in several ways, including that she reported to the assistant secretary for democracy, human rights and labor, not directly to the secretary of state.

“She had very few resources she could employ to develop strategies to advance international religious freedom,” he said.

Farr called on the Obama administration to nominate someone of high stature within international and religious freedom circles to succeed Johnson Cook.

“If the administration takes its time with this nomination, or nominates someone without those qualifications, it will confirm what many already suspect: It does not view U.S. international religious freedom policy as a priority,” Farr said.

Johnson Cook expressed satisfaction with her tenure and named several programs that she led or advanced.

She co-chaired the religion and foreign policy working group of the State Department’s “Strategic Dialogue with Civil Society” initiative to engage those outside diplomatic circles, where she got participants “really talking about taking religious freedom on seriously.”

Johnson Cook said then-Secretary of State Hillary Clinton also asked her to host a meeting on the implementation of U.N. Human Rights Council Resolution 16/18, which calls on member states to combat religious intolerance. She said she drew on her background in ministry and law enforcement to bring U.S. and foreign security officials together.

And generally, she said, her experience as a pastor boosted her office.

“As a faith leader, no matter what your faith is, when you go across the waters, there is a common respect and you find common ground from other faith leaders,” said Johnson Cook.

That “brought a whole lot of diplomatic dialogue that perhaps hadn’t happened before.”

News
A transqueer Latinx theologian writes about reaching ‘A Path to Our Liberation’
Follow us on Facebook!
Submit your photos to RNS