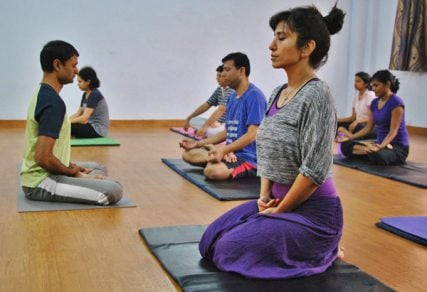 NEW DELHI (RNS) The Supreme Court of India is weighing whether yoga has a religious element, as it decides if public schools may teach the ancient discipline in the country where it originated.

India’s school policy considers yoga an integral component of physical education. But the court has expressed caution, and is considering arguments that yoga has a religious component. The issue is complicated because India is a secular democracy but has pockets of Hindu nationals who would like to force their way of life on others.

“Can we be asking all the schools to have one period for yoga classes every day when certain minority institutions may have reservations against it?” the court asked Oct. 18, referring to Christian and Muslim groups.

The issue is affecting other countries too. In July, a California judge ruled that the teaching of yoga in public schools does not establish a government interest in religion. The decision came after parents sued the Encinitas Union School District to stop yoga classes introduced to elementary schoolchildren in the upscale suburb just north of San Diego.

India’s two petitioners want the court to direct all schools run or funded by the federal government to include yoga as a subject in the first through eighth grades. They cite the 2005 National Curriculum Framework, which says yoga is vital for health and physical education.

“Yoga is man-making and character building education, which is so essential in modern materialistic age,” said Jagdish Chander Seth, a lawyer who is one of the petitioners.

Seth explained that the word “yoga” literally means “union with God,” and the discipline was developed “with intense effort of Great Rishis (spiritual leaders) since time immemorial.”

But he added that yoga had no connection with any particular religion. “(Yoga) is a path for spiritualism through healthy body and mind,” and schools should teach it as “science of breathing and physical postures,” he said.

Sanskrit words like “pranayama” and “Om” could be substituted with other words, he suggested.

Pranayama are breathing exercises, some of which involve chanting of “Om,” a mystical Sanskrit sound considered sacred in Hinduism, Buddhism, Sikhism and Jainism.

But some Christian and Muslim leaders oppose the move.

“Yoga, as it is currently practiced in India, is not merely a physical exercise. It has a strong component of faith to it,” said John Dayal, a Christian leader and member of the National Monitoring Committee for Minority Education.

“Some of the exercises, such as surya namaskar (sun salutation), have a strong religious overtone. … It is not possible to purge religious tones from yoga,” he said.

Mohammad Salim, national secretary of Jamaat-e-Islami Hind, a Sunni Muslim organization in India, said most Muslims will not accept yoga as a compulsory subject.

“Some forces are using yoga to strengthen their agenda of cultural nationalism,” he said. “Yoga can’t be made compulsory in India, which is a secular democracy.”

However, Umer Ahmed Iyasi, the chief imam of the All India Organization of Imams of Mosques, believes yoga is just physical exercise, and part of India’s rich heritage and culture.

Of India’s 1.2 billion people, 80 percent are Hindu, 13 percent are Muslim and 2 percent are Christian. The Indian Constitution guarantees a certain autonomy to minorities to administer their institutions. Many students from minority communities go to schools run or aided by the government, which account for about 80 percent of all schools in the country.