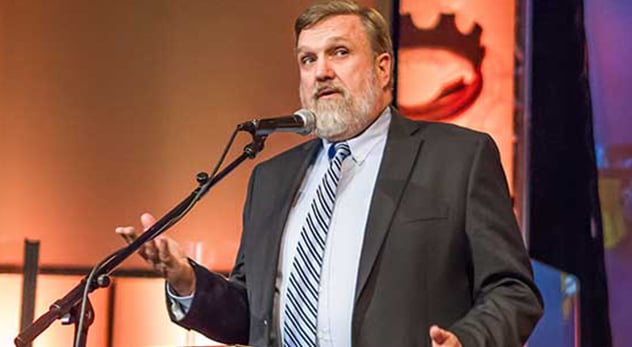 Pastor Doug Wilson says ministers who voted for Obama are unfit, but his comments raise questions about his own ministry.

Doug Wilson, pastor of Christ Church in Moscow, Idaho, says that pastors who voted for Barack Obama in the last election should resign.

“Any evangelical leader — by which I mean someone like a minister or an elder — who voted for Obama the second time, is not qualified for the office he holds, and should resign that office,” Wilson wrote in a blog post dated October 14. “Unless and until he repents of how he is thinking about the challenges confronting our nation, he should not be entrusted with the care of souls.”

Voting for Barack Obama, Wilson said, “exhibits a fundamental condition of cluelessness” because the President is pro-choice.

Forty-two percent of Protestants and 50% of Catholics voted for Barack Obama in 2012, according to Pew Research. This includes 95% of black Protestants.

In his post, Wilson took special aim at African-American Christians:

Not only must the dignity of human life be upheld by white and black Christian leaders alike, to the extent we may allow any differences, it should be to expect a greater vehemence in opposing abortion (in the person of its advocates and enablers) from black leaders. This is because it is their people who are being disproportionately targeted by the white Sangerites. And a black Christian leader who cannot identify a Sangerite is a rabbit leader who does not know what a hawk looks like.

He later likened voting for Barack Obama to German leaders voting for Hitler.

Wilson has quite a following, particularly among Reformed Christians. He’s written numerous articles for Mark Driscoll’s “Resurgence” blog, has shared a stage with popular pastor John Piper, and his book on fathering was released by Christian publisher Thomas Nelson in 2012. He has more than 16,000 twitter followers.

From the outset, let me say that I am unashamedly pro-life. I believe that the culture of abortion in our country will be judged as a blemish in our history by future generations. Abortion is one of the most significant moral issues of our time.

Yet, I would never argue that a pastor who voted for Barack Obama should resign his post. And I say this because of my allegiance to the Bible, not in spite of it. The Bible talks extensively about the qualifications for a pastor, most directly in the books of Titus and 1 Timothy. But even though it lists more than a dozen requirements from those who should hold that office, it does not list anything resembling a political requirement.

In fact, the Apostle Peter in his first epistle says that pastors should be examples to their flocks. He does this just three chapters after he tells the faithful to “honor the emperor.” This does not sound very extreme to modern readers, but a first century audience would know that the emperor was known for approving mass murder of the Jewish people.

As I pointed out in my book, A Faith of Our Own, just before Christ’s birth, Roman armies rolled through Galilee, burning down villages and killing innocents. Any who resisted their rule were tortured and often executed to deter mass rebellion. Sometime around or after Jesus’ birth, the Roman general Varus gathered the rebels in and around Jesus’ hometown and crucified about two thousand men.

Yet, Peter told believers to honor this emperor? Maybe Wilson thinks the surly apostle should have resigned his post too.

By all accounts, Doug Wilson jumped the shark a long time ago.

He expressed disturbing views on slavery in his pamphlet “Southern Slavery, As it Was.” Speaking fondly of the “unexpected blessings” of slavery, Wilson said, “slavery produced in the South a genuine affection between the races that we believe we can say has never existed in any nation before the War or since.”

In 2005, Wilson also insinuated that gays and lesbians could be executed by law in some circumstances:

This is what happens when people comb through my words without reading them. “Yes, they will say, but notice that even if you don’t believe in the death penalty for homosexual behavior in all circumstances, you have (by implication) said that there could be occasions when it is called for. Admit it!” Okay, I admit it.

As support, he cited Leviticus 20:13, which states that those who commit sexual acts with someone of the same gender should be put to death.

“I also believe that the law of the Old Testament was the model for our common law system,” Wilson commented,  “and our system should work in the same way.”

He added that “killing homosexuals is pretty much a non-priority for me” since AIDS is claiming so many lives in the LGBTQ community.

These comments are only the tip of the outrageous iceberg that is Doug Wilson’s public record.

While there is not a political requirement for pastors in scripture, the Bible does say that they should not be quarrelsome, but peacemakers, self-controlled, gentle, humble, and respectable. Given these requirements and the comments above, who do you think should be penning a resignation letter right now?