(RNS) When the nation’s Catholic bishops gather on Monday (Nov. 11) for their annual fall meeting in Baltimore, one of their chief duties will be choosing a new slate of leaders to guide the American hierarchy for the next three years. 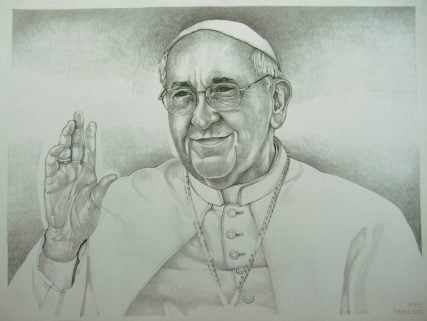 If Francis has made one thing clear in the eight months since he was elected, it is that he wants the church to radically change its tone and style, starting with the top. Pope Francis art by Zoltán Marton, Transylvania, Romania (Lead Pencil)

But the more than 200 prelates will also be looking over their heads — and maybe their shoulders — to the Vatican to gauge what Pope Francis’ dramatic new approach means for their future.

If Francis has made one thing clear in his nearly nine months on the job, it is that he wants the church to radically change its tone and style, starting at the top. The pontiff has repeatedly blasted careerism among churchmen and ripped “airport bishops” who spend more time jetting around the globe — and to Rome — rather than being pastors who go out to their flock and come back “smelling of the sheep,” as he likes to put it.

The pope has also lamented the church’s “obsession” with a few moral issues, including abortion and homosexuality, and called for a “new balance” that highlights the church’s concern for the poor and the marginalized.

“The pendulum has begun to shift back and how long it will continue to do so, well that is up to the Holy Spirit. For the moment, I find all this absolutely amazing,” Bishop Robert Lynch of St. Petersburg, Fla., wrote in an enthusiastic blog post after Francis gave an interview detailing his pastoral vision for the church.

The so-called “Francis Effect” is showing up in various ways, as some culture-warrior bishops have moderated their language on gays or shifted their emphasis to issues such as immigration. On the other side, bishops who have struggled for years to highlight the church’s social justice teachings are getting a new hearing.

The Catholic Church in the U.S. “must elevate the issue of poverty to the very top of its political agenda, establishing poverty alongside abortion as the pre-eminent moral issues the Catholic community pursues at this moment in our nation’s history,” Auxiliary Bishop Robert McElroy of  San Francisco wrote in a widely noted America magazine essay.

On issues from the bishops’ campaign against the Obama administration’s contraception mandate to high-profile battles against gay marriage, Francis’ new marching orders have scrambled what had been a fairly predictable routine.

But what will this mean for the Catholic Church in America?

In conversations with a range of bishops, church officials and longtime observers of the hierarchy, the answer seems to be: maybe not too much, for now, beyond a shift in tone or the type of press releases emanating from the U.S. Conference of Catholic Bishops in Washington.

Observers say a significant number of churchmen have not been won over by Francis the way the rest of the world has, and if they have tempered their public criticisms they are still fuming privately over how Francis is playing in the media.

“He’s got to stop giving these off-the-cuff interviews,” said one bishop, who asked not to be named publicly in order to speak candidly about his new boss, in a comment that was echoed by several others.

Some appear willing to wait out this pope — Francis is in good health but turns 77 next month — or they are betting that Francis’ ambitious agenda will be blunted by the Roman bureaucracy and the bishops’ own inherent inertia.

Even those who are rooting for Francis acknowledge that the hierarchy is one place where trickle-down theories work, and nothing will change much until — and unless — the pope “makes some appointments that turn heads,” as one bishop put it. If Francis does that, the bishops could fall in line more quickly. If it seems like business as usual, then things will move more slowly.

“The changes are not going to be radical or overnight,” said Russell Shaw, a former spokesman for the bishops whose latest book is “American Church: The Remarkable Rise, Meteoric Fall, and Uncertain Future of Catholicism in America.”

“Matters of tone and style and rhetoric are in fact extremely important,” Shaw said. “And those changes are to be expected. But I’m not looking for any significant changes of substance or policies” this November.

One important indication of where the hierarchy is headed will come when the bishops elect new leaders to three-year terms.

Three years ago, the bishops upended tradition in bypassing the sitting vice president, Bishop Gerald Kicanas of Tucson, Ariz., to lead the bishops’ conference. Instead, conservatives backed New York Cardinal Timothy Dolan because he was expected to bring a more forceful public presence in battles with the Obama administration.

This year, church observers fully expect the current vice president, Louisville Archbishop Joseph Kurtz, to win the top job. Kurtz is well-liked and has experience on a wide range of issues, and many say the hierarchy doesn’t need a chief with the kind of media power that Dolan brought to the role.

That will make the battle for the second spot — and presumptive president three years from now — the real test. The slate of 10 candidates covers the spectrum from prominent culture warriors to strong advocates of social justice issues.

But early indications are that the bishops could opt for a middle ground: either Archbishop Jose Gomez of Los Angeles, a Hispanic and vocal proponent of immigration reform; or Archbishop Dennis Schnurr of Cincinnati, who has extensive experience working in the bishops’ conference.