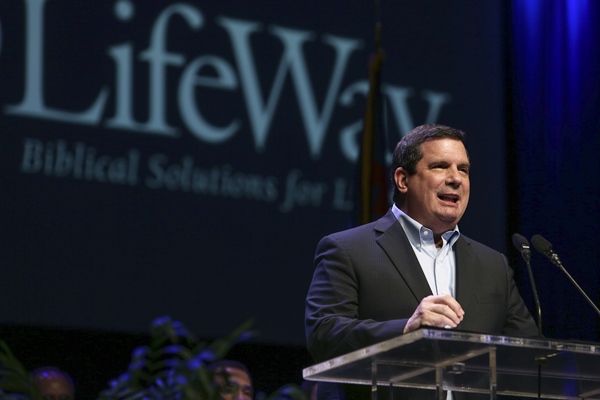 (RNS) The president of Southern Baptist retailer LifeWay Christian Resources has apologized for publishing Vacation Bible School material nearly 10 years ago that "used racial stereotypes that offended many in the Asian American community."

Thom Rainer, who became president and CEO in 2006, said Wednesday (Nov. 6) in a video message at the Mosaix conference in Long Beach, Calif., that the "Rickshaw Rally" curriculum is "still a point of hurt for some."

"I am sincerely sorry stereotypes were used in our materials, and I apologize for the pain they caused," Rainer said.

"I agree with those who have helped us understand the offensive nature of that material," he said. "And I agree evangelical church and ministry leaders -- particularly those of us who are white -- need to commit to assuring, as best we can, these offenses stop."

Rainer's apology is the latest twist in a series of recent events that have left many Asian-American Christians with questions about how they're perceived by fellow evangelicals.

"I’m really moved that LifeWay would go to these lengths to do this," said Soong-Chan Rah, a professor of church growth and evangelism at North Park Theological Seminary in Chicago, who has written and spoken on racial issues in evangelicalism. "It’s not something they had to do since many people will see it as something that happened so long ago."

Rah said it was significant that LifeWay hasn't swept the issue under the rug.

"There’s prophetic wisdom and courage in apologizing," he said. "Once confession, repentance and forgiveness occurs, we’re able to have a conversation on a deeper level."

Mosaix is a multiethnic conference in Long Beach in its second year, attracting more than 1,000 people from around the country.

"The handful of people I talked with, Asians and non-Asians, received it well, and appreciated the notable and extra effort by Lifeway to model reconciliation, fits the conference theme of being a multiethnic church and the extra effort it requires," said DJ Chuang, who is attending and tweeting about the conference.

Author Helen Lee, one of the signers of an open letter to evangelicals expressing concern about the recent events, said Wednesday's step was a positive one.

"What Rainer and LifeWay have done by acknowledging the error publicly, even nine years later, is to demonstrate that it is never too late to do the right thing and to pursue reconciliation," she said.

Rainer said LifeWay has made progress in racial sensitivity in the organization.

"LifeWay will continue to train our staff to be aware of and sensitive to ethnic and cultural differences so that our materials continue to respectfully represent all people groups," he said. "Finally, I will lead our executive leadership staff to engage in dialogue and conversation with ethnic leaders that we might go forth together to strengthen believers and reach people in North America and around the world."