TORONTO (RNS) Quebec’s long-awaited secularism charter was formally introduced in the province’s legislature on Thursday (Nov. 7) under a new name but with the same goal of restricting “overt” religious expression in the public square. 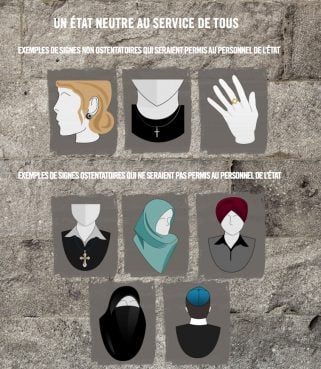 The rebranded Charter of Quebec Values was introduced in Quebec City as “Charter Affirming the Values of Secularism and the Religious Neutrality of the State, As Well As the Equality of Men and Women, and the Framing of Accommodation Requests.”

Bernard Drainville, the governing Parti Quebecois minister responsible for the proposal, said the mouthful of a name was selected by government lawyers, adding they like long names that encompass the major details in the title.

“There’s no new phrasing,” Drainville told reporters Wednesday, downplaying the new title. “It’s the name of the bill. You need to give bills a name. Jurists have been working on it. Jurists like giving bills long names that try to summarize everything in the bill. That’s the real reason.”

It was previously known as the Charter of Secularism.

Under any name, the measure would ban all “overt” and “conspicuous” religious headgear worn by public sector employees, including hijabs, yarmulkes and Sikh turbans, as well as large crosses and crucifixes. It would affect civil servants, day care workers, nurses, teachers, doctors and others.

The idea, according to the drafters of the bill, is to establish religious neutrality and gender equality in the public sector.

Moments after the PQ submitted the charter, the opposition Liberals called it an attack on religious freedoms.

“You don’t protect the rights of individuals by taking away their rights,” opposition leader Jean-Marc Fournier said, echoing the sentiments of religious groups that have lashed out at the measure.

As a minority government, the PQ will need the support of opposition parties for the bill to pass. The Coalition Avenir Quebec party has proposed a much less sweeping ban on religious expression, while the Liberals have called for the charter’s headgear provisions to be all but eliminated, with the exception of people covering their faces while receiving state services.

The provincial government is allowing for a one-year transition period to implement the provisions. The charter calls for disciplinary measures for those who do not comply with its bans, but those are unspecified in the bill.

Meanwhile, Canada’s federal government has said that if the charter is approved, Ottawa would order a review by its Justice Department.

“We would challenge any law that we deem unconstitutional, that violates the fundamental constitutional guarantees to freedom of religion,” Jason Kenney, the federal multiculturalism minister, said in September.