Rev. Nadia Bolz-Weber is a pastor at House for All Sinners and Saints, an Evangelical Lutheran Church in Denver. Bolz-Weber is photographed here speaking at the 2013 Religion Newswriters Association Conference in September. RNS photo by Sally Morrow
November 8, 2013
Cathleen Falsani

PASADENA, Calif. (RNS) The first thing most people mention when they talk about the Rev. Nadia Bolz-Weber is her tattoos. She has many -- most of them religious in nature, including a large icon of Mary Magdalene covering her right forearm. 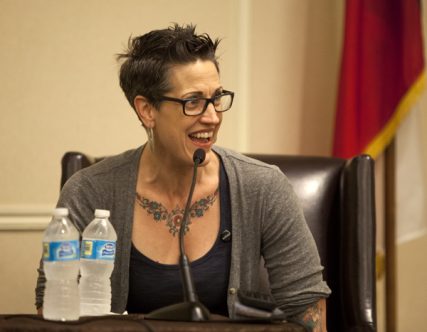 The Rev. Nadia Bolz-Weber is a pastor at House for All Sinners and Saints, an Evangelical Lutheran Church in Denver. Bolz-Weber is photographed here speaking at the 2013 Religion Newswriters Association Conference in September. RNS photo by Sally Morrow

Then they talk about how tall she is (6 foot 1), that she looks more like the lead singer of an all-girl punk rock band than a pastor and that she (unapologetically) swears a lot -- even from the pulpit while preaching.

All of the above is true and part of what makes Bolz-Weber unique among high-profile pastors and so-called “Christian authors.” (I hate that term. The word “Christian” is best used as a noun, not an adjective.)

But to focus solely on those externals is missing the point. Bolz-Weber has a bold and unmistakable voice, preaching the gospel of grace in a way the world needs to hear. And we might not listen if her appearance, vocabulary and backstory were more neat, pious or easy.

Bolz-Weber, a pastor at House for All Sinners and Saints, an Evangelical Lutheran Church in America in Denver, was here recently speaking to a full house at All Saints Episcopal Church on a book tour promoting her new memoir, "Pastrix: The Cranky, Beautiful Faith of a Sinner & Saint."

At the moment, “Pastrix” (which debuted last month at No. 17 on the New York Times Best Seller list) is at the very top of my books-everyone-I-care-about-has-to-read.

It is funny (once upon a time Bolz-Weber was a stand-up comedian), filled with indelibly fascinating characters (she is a recovering alcoholic who ran with and still runs with a motley tribe of wonderfully imperfect souls), and the most honest memoir I believe I’ve ever read.

“I have a lot of struggles in my life, but being me is not one of them,” Bolz-Weber said during a Q-and-A session that followed her talk at All Saints. “I think evangelism is being legitimately who you are, where you are. That’s it.

“People often say one of two things to me after they hear me speak: Thanks for your honesty and thank you for your authenticity -- it’s really refreshing. Here’s how high the bar is. People will wait in line to say thanks for not lying to me or pretending to be someone else. Uh, you’re welcome?”

As she said this, people in the pews erupted in (knowing) laughter.

Bolz-Weber is decidedly unconventional, but she’s also a married mother of two and a pastor’s wife. (Her husband, Matthew, also is a Lutheran minister, at a different congregation in Colorado.) How she became a minister -- how she received “the call,” as those of us in ecclesiastical circles call it -- is a riveting tale. And no, I won’t spoil it by telling it here. You’ll have to read it for yourself.

Suffice to say, when her course of study at Denver's Iliff School of Theology took a turn from an academic degree to a divinity degree, i.e., she was heading for ordination, no one was more surprised than she.

No one, perhaps, except her parents, who had raised her in a conservative (some might say fundamentalist) church tradition that definitely didn’t endorse the ordination of women. One of my favorite passages in “Pastrix” recounts the moment she told her parents about her call to ordained ministry:

“My father silently stood up, walked to the bookshelf and took down his worn, leather bound Bible,” she writes. “Here we go, I thought, he’s going to beat me with the scripture stick. He opened it up and read. I could tell from where he was turning that it wasn’t one of Paul’s letters at the end of the book, but something closer to the middle.

“My father did not read the 1st Timothy passage about women being silent in church. He read from Esther. From my father I heard only these words: ‘But you were born for such a day as this.’ He closed the book and my mother joined him in embracing me. They prayed over me and gave me a blessing,” she continues.

While there are elements of redemption and a life turned around in “Pastrix,” it is not a typical addict-turned-believer story.

Reading “Pastrix” won’t give you 10 steps to follow to turn your life around or 12 questions to answer to determine whether God is calling you to go to seminary, become a doctor or join CrossFit and start weight lifting (although Bolz-Weber can clean-and-jerk about 145 pounds.)

What it might do is encourage you to pay attention to what God already is doing -- in the world, in your neighborhood, in your social group and in your life.

“I think God wants to be known and I think that often we look for God in the wrong places,” Bolz-Weber told the crowd in Pasadena. “We think we are going to search for God in improving ourselves. Meanwhile, God’s wanting to be known in the person who’s really annoying me right now, or in the thing that I keep failing to do.”

(Cathleen Falsani is the faith and values columnist for The Orange County Register.)