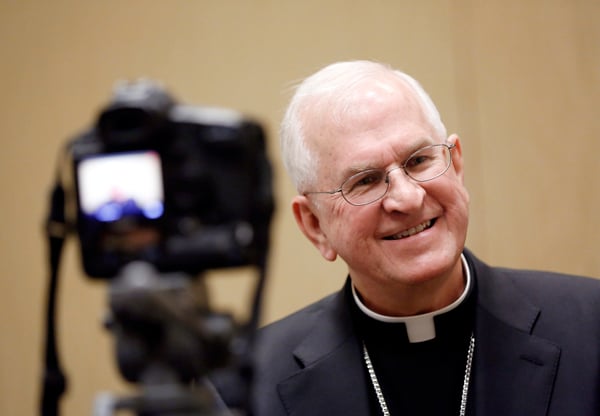 BALTIMORE (RNS) The U.S. Catholic bishops on Tuesday (Nov. 12) stuck with tradition and two known quantities in electing Archbishop Joseph Kurtz of Louisville, Ky., and Cardinal Daniel DiNardo of Houston to lead the hierarchy as the bishops wait to see how Pope Francis reshapes their membership.

As the current vice president of the U.S. Conference of Catholic Bishops, Kurtz’s election as president was expected and he won a 53 percent majority on the first ballot, gaining 125 of 236 votes cast.

The selection of DiNardo as vice president — and likely successor to Kurtz in three years — was seen as a safe choice as well.

“They elected two moderates who are not radical change agents in any way,” said Russell Shaw, a former spokesman for the bishops and author who was at the meeting.

DiNardo emerged from a slate of nine candidates and won a majority of votes on the third ballot, defeating the runner-up, Philadelphia Archbishop Charles Chaput, by a 147-87 margin. Three years ago, Kurtz defeated Chaput — a conservative lightning rod in the hierarchy — by a nearly identical margin, 147-91.

While the bishops did not opt for a culture warrior like Chaput to lead them, they also bypassed Los Angeles Archbishop Jose Gomez, a Mexican-born candidate who would have been the first Latino in the hierarchy’s top ranks. Gomez would have reflected both the growing Latino presence in American Catholicism and the church’s turn toward the Global South represented by the election of Argentine Cardinal Jorge Bergoglio as Pope Francis.

The bishops also passed over other, more progressive candidates who might have reflected the new tone of inclusion and a focus on the poor demanded by Francis.

Kurtz has previously led the conference’s fight against gay marriage, though he is seen as a well-rounded candidate with deep roots in Catholicism’s social justice teachings. In a press conference after his election, Kurtz cited his 12 years as a parish priest as his most important experience. 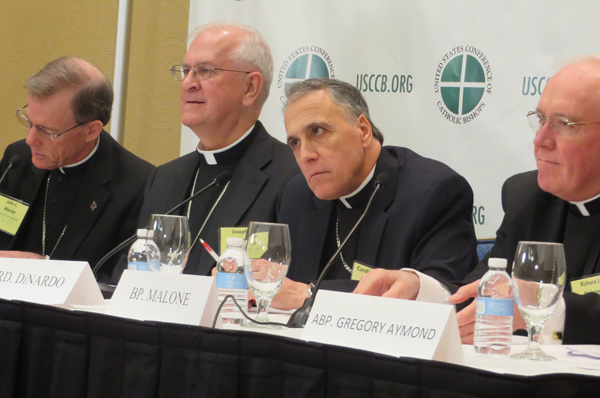 “How can we warm hearts and heal wounds?” Kurtz said after his election, vowing to follow Francis’ example of reaching out to those marginalized by the church or society.

He cited advocacy for immigrants and the poor as well as traditional concerns over abortion and euthanasia as issues he and the conference would stress. He did not propose any particular new initiative, however, and observers say he will have to consult with the rest of the 250 bishops gathered here as he tries to advance the hierarchy’s agenda.

By custom, the vice president is voted in as president at the end of his three-year term. But three years ago, a group of conservative bishops rallied to deny the then-vice president, Bishop Gerald Kicanas of Tucson, Ariz., the top spot and instead elected New York Cardinal Timothy Dolan. That move upset many bishops.

“I was astounded, disappointed and somewhat ashamed,” Bishop Robert Lynch of St. Petersburg, Fla., wrote on his blog on the eve of this vote. “(A) great bishop was embarrassed, a group of bishops within the conference were celebrating their victory, and I thought it was one of the worst experiences of being a bishop I had experienced.”

The bishops seemed determined not to repeat that experience, nor did they want to reward conservatives with another victory. In addition, while Dolan is gregarious and media savvy, there was a desire to find a softer-spoken leader for a quieter time while the conference looks toward a retrenching period under Francis.

DiNardo was recently the bishops’ point man in the fight against abortion but he also worked at the Vatican for many years before being named a bishop in Iowa in 1997 and then head of the Archdiocese of Galveston-Houston in 2006.

The choices, Winters added, were more about pragmatism than ideology. “Many bishops want someone who they think can run a meeting or will get back to them in a timely fashion,” he said. “They don’t really want to work with anyone with hard edges.”

The leadership elections were one of the few notable items on an otherwise mundane public agenda. The bishops also overwhelmingly voted to develop a document against pornography.

The real debates were expected to go on behind closed doors in sessions that will last through  Thursday. Church sources say the bishops are expected to have frank talks about contentious issues like their stance against the Obama administration’s contraception mandate.

But they are also expected to discuss the larger direction of the hierarchy. The election of Pope Francis and his oft-repeated desire to push the bishops in a new, more pastoral direction have unsettled the bishops, who in recent years were already divided and often unable to agree on major statements or initiatives.

Many of the bishops meeting here said the conference was in something of a holding pattern, waiting to see who Francis will name to leading U.S. dioceses and whether he can recast the U.S. hierarchy in his mold and perhaps leave it more unified.